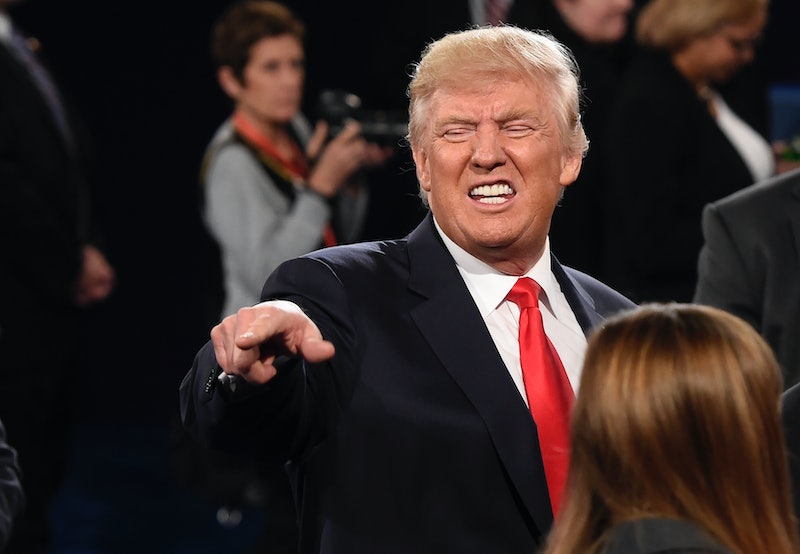 The awful 2005 Access Hollywood recording of Donald Trump that dropped on Friday has brought intense focus to Trump’s attitude toward women, but it was obvious long before now that he has a major problem with the opposite sex. The list of sexist things that Trump has said and done is disturbingly long, and the thought that he could become president is terrifying — not only because it would allow Trump to enact dangerous, racist policies, but because it would validate the way that Trump approaches and talks about women.

If Trump were to be elected president, it would send the message that Trump’s blatant misogyny isn’t a barrier to power. It would say, “You can publicly treat women like garbage, and not simply get away with it — you can be appointed to our nation’s highest office!” And the message it would send to women is even scarier: “You don’t deserve respect.”

It’s important to remember, as Hillary Clinton pointed out in the debate last night, that Trump hasn’t only been offensive and disrespectful to women. “[I]t's not only women,” she said. “… [H]e has also targeted immigrants, African- Americans, Latinos, people with disabilities, POWs, Muslims, and so many others.” A Trump presidency would be bad for so many people on so many levels that it’s hard to quantify, but let’s start here. Read on for seven incredibly sexist things that Trump getting elected would implicitly endorse:

1. Touching and kissing women without their consent. (Also known as… sexual assault.)

The tape that dropped on Friday is horrific in many (many, many, many) ways, but the bit that has gained the most traction is the disgusting “Grab them by the pussy” line. Here’s the full quote:

The line’s extreme vulgarity made it instant meme fodder, but what Trump is saying here is no joke: He believes that his fame gives him the right to “grab” a woman’s genitals without her consent. As moderator Anderson Cooper pointed out in the debate on Sunday, “That is sexual assault.” Full stop.

The fact that I even have to write this proves that we’re already living in the darkest timeline, but here goes: Someone who brags about sexually assaulting women is not fit to be president.

Trump has repeatedly defended himself by describing his misogynistic 2005 exchange with Billy Bush as “locker-room banter.” What he’s suggesting, essentially, is that this is just how men talk to each other — that men bond with other men by objectifying women and casually talking about assaulting them. “Boys will be boys,” right? Obviously, this characterization of male bonding is deeply insulting to men, and a number of pro-athletes have taken to Twitter to point out that Trump’s version of “locker-room talk” doesn’t reflect what goes on in their locker rooms. Nevertheless, some Trump supporters continue to say that Trump was simply engaging in “guy talk.” Rudy Giuliani, for example, argued that “men at times talk like that."

To elect Trump as president would be tacit endorsement of a mode of male communication that revolves around entitlement to and violence toward women’s bodies. It would tell the nation, “This is how guys talk. Get over it.”

In the early hours of September 30, Trump went on a bizarre Twitter rant against former Miss Universe Alicia Machado, in which he seemed to argue that her sexual history somehow disqualifies her from criticizing him. He wrote, “Did Crooked Hillary help disgusting (check out sex tape and past) Alicia M become a U.S. citizen so she could use her in the debate?” (FYI, there is no sex tape.)

Trump, the Republican nominee for President of the United States, thus publicly slut-shamed a private citizen and implied that Machado’s sexual history makes her “disgusting.” He demonstrated that he thinks it’s entirely appropriate to use a woman’s sexual past as a weapon against her, the implicit message being that a woman is fundamentally tainted by her sexual behavior. Trump, who has publicly boasted about his own sexual exploits, doesn’t seem to hold himself, or men more generally, to the same standard.

It should be noted that in Sunday night’s debate, Trump said he had not told his followers to “check out” Machado’s sex tape. As you can see in the tweet above, he most certainly did.

In 2015, Trump criticized Megyn Kelly’s performance as moderator of a Republican debate. After Kelly asked him about his history of negative comments toward women, Trump told Don Lemon, “You could see there was blood coming out of her eyes. Blood coming out of her wherever.” Although Trump later argued that he was referring to Kelly’s nose, the comment was widely regarded as being a reference to menstruation. Because women on their periods be crazy, right?

This was hardly the first time that Trump has expressed disgust with women’s bodily functions; he’s grossed out by breastfeeding (more on that below), as well as the fact that women go to the bathroom. After Hillary Clinton took advantage of a commercial break to use the bathroom during a Democratic debate in 2015, Trump said, “[I]t's disgusting, I don't want to talk about it. No, it's too disgusting,” prompting Bernie Sanders to utter the greatest burn of the election: “He has discovered that women go to the bathroom, and it’s been very upsetting to him.”

In 2015, attorney Elizabeth Beck told CNN that Donald Trump called her “disgusting” for asking for a break during a deposition to pump breast milk. “He got up, his face got red, he shook his finger at me and he screamed, ‘You're disgusting, you're disgusting,’ and he ran out of there,” she said. We already live in a country where breastfeeding women are often shamed or asked to cover up while feeding their babies; the last thing we need is a president who thinks that this basic and beneficial aspect of childrearing is “icky.”

(Are you noticing a trend here? There’s a lot of shaming of women where Donald Trump is concerned.)

Before he was slut shaming her on Twitter, Trump fat-shamed Alicia Machado during her tenure as Miss Universe. Machado has said that after she won “Miss Universe” in 1996, Trump ridiculed her for her weight, dubbing her “Miss Piggy,” describing her as an “eating machine” to Howard Stern, and even inviting reporters to watch her work out at a New York gym. Machado said she struggled with eating disorders for years afterwards. After Hillary Clinton brought up Trump’s history with Machado in the first debate, Trump reiterated his fat-shaming comments, telling Fox & Friends, “She gained a massive amount of weight, and it was a real problem.” His logic seems to be that whatever disrespect or cruelty he showed Machado was justified — because (according to him) she was fat, and, in his mind, fat people deserve to be ridiculed.

Machado isn’t an isolated case: Trump has repeatedly shown his disgust for women who are overweight — or, more accurately, women that he perceives as failing to meet his particular standards of female beauty — including Rosie O’Donnell (She has a “fat, ugly face,” he’s said) and Kim Kardashian (“Does [Kim Kardashian] have a good body?”, he asked Howard Stern in 2013. “No. Does she have a fat ass? Absolutely.”)

7. Valuing women solely for how they look.

Trump has made clear again and again that, for him, a woman’s most important quality is her appearance — and that, therefore, the most effective way to attack a woman is to focus on her looks. When he criticized his then-opponent, Carly Fiorina, in 2015, he said, “Look at that face. Would anyone vote for that?” He’s called Rosie O’Donnell a “big, fat pig.” In 2011, New York Times columnist Gail Collins wrote about a note that Trump sent her that included a photo of her with the comment “The Face of a Dog!” In 2012, he tweeted that Arianna Huffington “is unattractive both inside and out. I fully understand why her former husband left her for a man.” Last year, he also lamented that supermodel Heidi Klum is “no longer a 10.” The list goes on.

Given the way things have gone so far, this insane election will only get crazier as we move toward Election Day on November 8. The only remedy for this depressing madness is to vote. If you haven't already registered, you may still be able to do so, depending on where you live. Find out more here.

More like this
34 Quotes That'll Inspire You On Juneteenth & Beyond
By Syeda Khaula Saad and Siena Gagliano
How Getting An Abortion Has Changed From The ’60s Through Today
By Amanda Chatel
Why You're Seeing Green Bandanas At Abortion Rights Protests
By Lexi Inks
How To Fight For Reproductive Rights, Based On How Much Time You Have
By Courtney Young
Get Even More From Bustle — Sign Up For The Newsletter