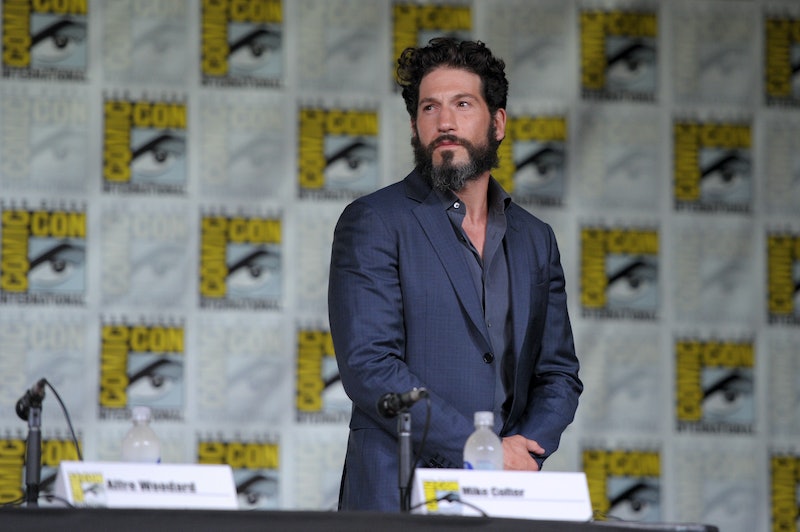 Jon Bernthal may have broken out in the post-zombie apocalypse drama The Walking Dead , but his career hasn't slowed down at all since he left the show. 2016 has been a big year for the actor. Bernthal was electric as Frank Castle in Daredevil Season 2 and it didn't take long for Marvel and Netflix to announce that he'd be carrying solo spin-off series, The Punisher. The first season of that show is still in production, so fans have a bit of a wait to see where the family-man-turned-executioner is headed next. But you'll soon be able to catch Bernthal in The Accountant, the upcoming thriller staring Ben Affleck as a numbers genius with a criminal client list. The actor plays a man named Braxton in the movie. And though this role doesn't come with the pressure of a popular comic book villain, Jon Bernthal's character in The Accountant isn't entirely unlike the Punisher.

The marketing for The Accountant is as secretive as the promotion for a mystery thriller should be, so there's a lot still to be revealed about the movie and this character. The basic story is this: Christian Wolff (Affleck) grew up a math prodigy lacking in many basic social skills. As an adult, he "cooks the books" for several unsavory organizations and people. When he takes on a robotics company as an effort to appear law-abiding, he finds something in the numbers that puts his life in jeopardy.

Braxton (Bernthal) is one of Wolff's employers. According to the movie's trailer, he's an assassin. So I assume that Wolff assists Braxton in cleaning the dirty money he gets from jobs. Like Frank Castle, this character is capable of great violence. But the Punisher is no mercenary. He's driven by a need to avenge the family who were killed in front of him. That criminal nobility is what makes that character so complicated and tragic. Anyway, the full trailer also shows that Braxton turns on Wolff at some point. He knows too much about Braxton's highly illegal activity to be unimportant. "Some of my clients are quite dangerous," Wolff says over a shot of Bernthal's character screwing a silencer onto a gun. Watch the complete trailer below.

In an interview with Rotten Tomatoes, Bernthal talked about how Braxton is another character who, like Frank Castle, is more than what immediately meets the eye. "What I loved about him is sort of that he's this guy that's in one sense very in control and capable," Bernthal said. "But at the same time he's completely out of control and spiraling." The actor also confirmed that Braxton also has had experiences that set him on this specific path. "It was very interesting to be able to play a character like that and then also have this built-in backstory and have it come from some place and sort of make it emotionally resonate throughout the movie," Bernthal explained. What that backstory entails isn't public yet, but the actor promised that by the end of the movie, "you sort of see why he is the way he is."

Punisher fans will certainly agree that a killer with motivations is way more interesting than one without. The Account is in theaters Oct. 14.