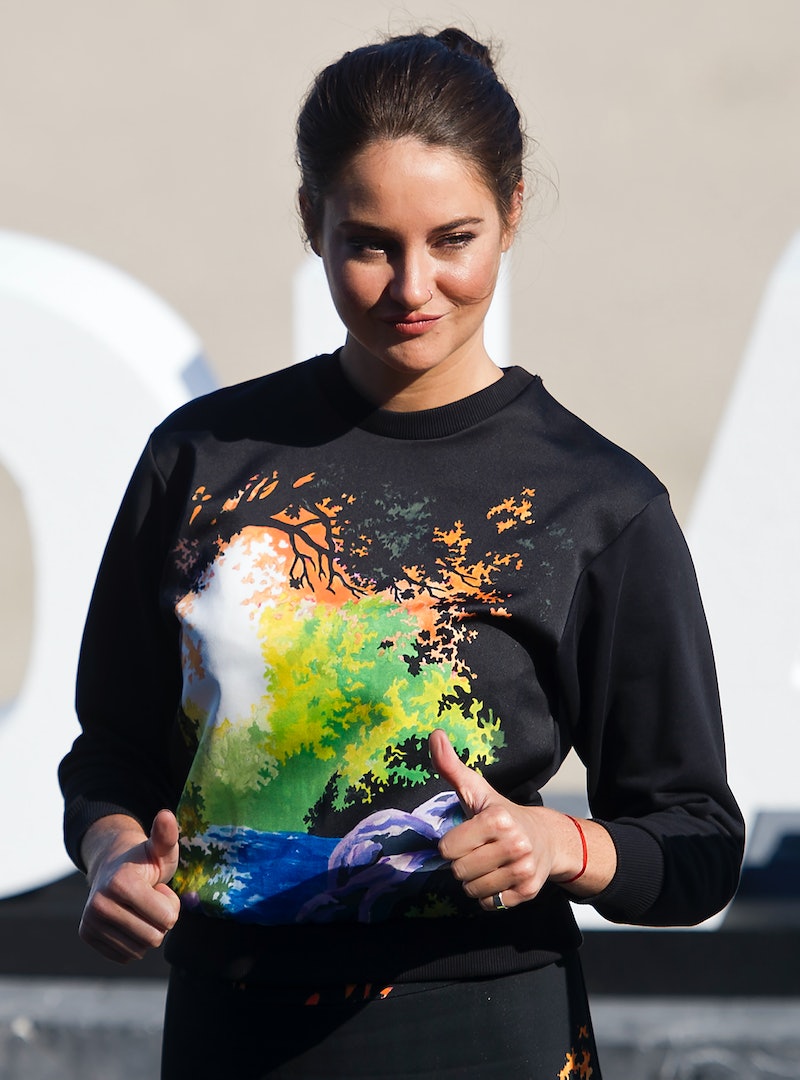 On Monday afternoon, news broke that Shailene Woodley was arrested for alleged criminal trespassing in Sioux County, North Dakota. This reportedly happened after she joined 100 others in peacefully protesting the construction of the Dakota Access Pipeline. The Morton County Sheriff confirmed to E! News that the actor, along with 26 others, was arrested. Bustle has reached out to the Morton County Sheriff's office, but did not receive an immediate response. Woodley's legal rep told Bustle, "We do not comment on client matters." But if you want the star's side of the story, look no further than Woodley's Facebook videos from the scene. The 24-year-old posted live footage of the two hours leading up to her arrest.

Earlier: While it's lengthy, there are several parts worth watching. (Of course, you can watch the entire two hours, but I'm focusing on the most important parts, for the sake of time.) In the beginning, Woodley narrated what happened when police arrived on the scene in riot gear. She contrasted the sight of armed officers with the seemingly peaceful protest occurring around her. As she put it, "This is America. America. Look what we're faced with when trying to protect the water." She also showed signs being held by the protestors with statements ranging from "Defend the sacred" to "Water is life."

As for why this is all happening, the Dakota Access Pipeline is a controversial project. On Sunday night, the U.S. Court of Appeals rejected the Standing Rock Sioux Tribe's request for the pipeline's construction to be halted. The $3.7 billion project would transport oil across four states, according to NBC News. While the project focuses on economic benefits, the flip side is that it involves building on some of the tribe's sacred land. Not only that, but environmentalists believe it could affect the tribe's clean water supply, since the pipe would flow beneath the Missouri River.

According to CNN, project developers believe the pipeline "is the safest, most cost-effective and environmentally responsible way to move crude oil, removing dependency on rails and trucks." The Energy Transfer website explained, "the Dakota Access Pipeline will reduce the amount of crude oil shipped by truck and by rail and increase the amount shipped by pipeline."

Near the end of her video (you can skip ahead to the last eight minutes), Woodley is seen returning to her vehicle with a group of people, including her own mother. She then talked to police officers, who she claimed "had giant guns and batons and zip ties and they're not letting me go." An officer told her on-camera, "You're going to be placed under arrest for criminal trespassing." Woodley questioned the officers, before being placed in handcuffs. He said that she was arrested because she was "identified."

Before walking away in handcuffs, the Divergent star claimed to the camera,

"So everybody knows… we were going to our vehicle which they had all surrounded and waiting for me with giant guns and a giant truck behind them just so they could arrest me. I hope you're watching mainstream media."

From the looks of the footage, it does appear that she, as well as the rest of her group, cooperated with the officers' request to return to their vehicles.

While Woodley's videos are helpful in showing her perspective, they don't tell the full story, since there's not more of an explanation into the police officers' decisions or actions. Hopefully more clarity will be provided as soon as possible.