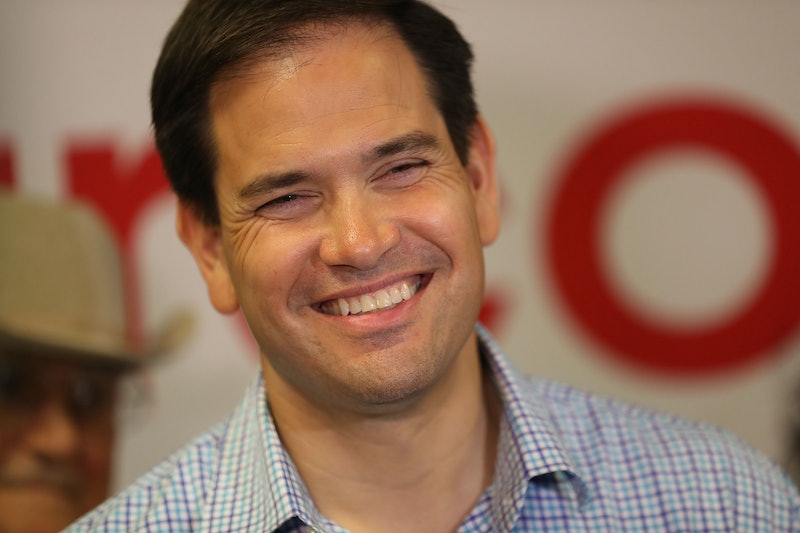 The GOP is still reeling from the audio clip of Donald Trump bragging about being able to grope women without permission in 2005, which was published Friday and has dominated the news ever since. Although many elected Republicans have retracted their endorsements of the Republican presidential candidate in light of this, some have chosen to downplay the appalling nature of those comments and remain loyal. And incidentally, a lot of these pro-Trump Republicans used to care about sexual assault before their party's candidate suggested that he, in fact, doesn't respect women.

The first poll since the release of the tapes suggests that the comments have legitimately damaged Trump's chances of becoming president: An NBC/WSJ poll showed Clinton leading Trump by 11 points in a four-way matchup with Gary Johnson and Jill Stein. Nevertheless, most of Trump's Republican enablers are sticking with him throughout this controversy, offering up various excuses for his on-tape sexual depravity.

But it wasn't always this way. There was a time when these same folks cared deeply about sexual assault, or at least pretended to, and vocally spoke out against it. Those days are long gone, of course, but let's take a trip down memory lane to a quainter time — a time when the GOP was willing to at least give lip service to the idea that, hey, sexual assault is a bad thing.

Less than two months ago, the Speaker of the House gave a press conference on the importance of providing support to survivors of sexual assault. He continues to support Trump's presidential campaign, and decided not to retract his endorsement after the tape leaked.

Trump supporter Chris Christie, also the governor of New Jersey, sent out a press release in 2011 proclaiming that "sexual assault is a violent crime and its victims must be treated with respect and compassion." This belief didn't compel him to drop his support for Trump after the 2005 tape was released, however.

Florida Senator Marco Rubio once gave a shout-out to a local football player who "stepped in to stop a sexual assault," and has called campus sexual assault "a grave concern" for American students.

Former presidential candidate Rand Paul said in 2014 that it was an "injustice" for sexual predators to "walk free." He hasn't retracted his Trump endorsement, though.

The governor of Texas once bragged that he does "more than just talk tough about sexual assault." Now, he doesn't even do that, as he continues to support Trump's presidential bid.

In April, The junior senator from Iowa trumpeted her "bipartisan effort to help end sexual assault" on college campuses. She stood by her endorsement of Trump after his comments about groping women without permission leaked.

The Texas Senator once pleaded with his Twitter supporters to "use your voice to help stop sexual assault." He himself could have done this by retracting his endorsement of Trump, but he hasn't.