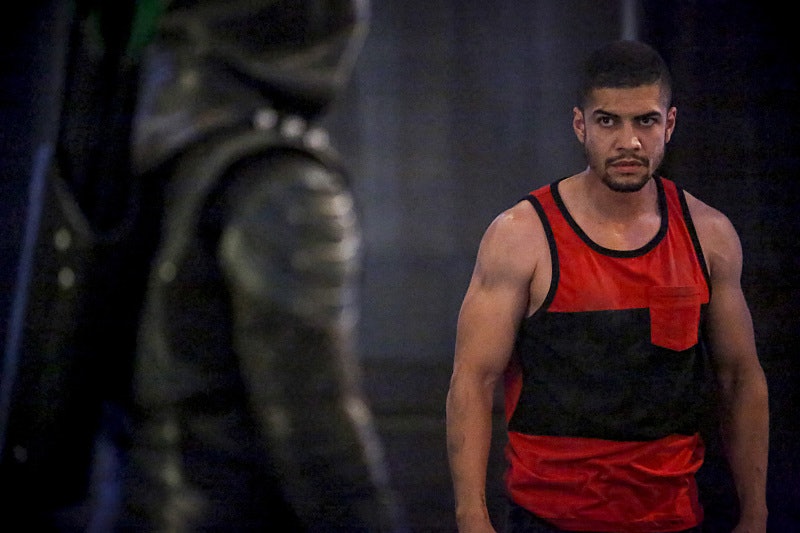 Tobias Church may have gotten the upper hand on Oliver Queen during the Arrow Season 5 premiere, but that was mainly due to the fact that he's so outnumbered now that the members of Team Arrow have gone their separate ways. However, it looks like that's all going to change in the very near future thanks to Oliver's decision to recruit other vigilantes to join his merry band of heroes. One such vigilante came into Oliver's radar last Wednesday who goes by the name of Wild Dog aka Rene Ramirez, played by Rick Gonzalez. And for those of you unfamiliar with who Wild Dog is on Arrow , let me assure you that he's going to become a vital part of Team Arrow's ensemble.

In the comics, Wild Dog's real name is Jack Wheeler, who was a star football athlete in college until an injury forced him to quit the team. He then enlisted into the Marines and later fell in love with a woman who was eventually killed by a gunman. That's when Wheeler decided to take a stand against street violence by donning a hockey mask and becoming the vigilante Wild Dog. Like most of the characters on Arrow, he doesn't possess any magical abilities or superpowers like The Flash's metahumans, but he is skilled in hand-to-hand combat and is more than qualified to have Oliver's back.

Of course it's possible the series will take some liberties with Wheeler's comic book background, so some of the details may not entirely parallel each other. But the overall thing to know is that this character is one of the good guys and wants the same thing as the rest of our vigilante crew: to make Star City safe — something it hasn't been in a very long time or possibly ever.

Some fans may be hesitant to welcome another member of the group into the fold, not because new characters aren't compelling or interesting because they definitely are, but rather because if may feel as though the series is trying to replace Diggle, Thea, and Laurel. And while I certainly understand that concern, I don't think these newcomers are going to make you feel that way. They aren't looking to edge out the characters we've come to know and love. No one could ever do that. But their presence will serve not only to assist Oliver in his time of need, but also make him remember that there are decent people out there that he can trust. The Green Arrow has a tendency of trying to do things all on his own, so this should get him to open up a bit more and see that doesn't always have to be the case.

Basically, all I'm saying is to go into this storyline with an open mind. No one can replace the characters we've lost (RIP Laurel), but that doesn't mean we can't come to love new characters along the way. Plus, is there really any such thing as too many crime-fighting heroes? No, no there isn't.