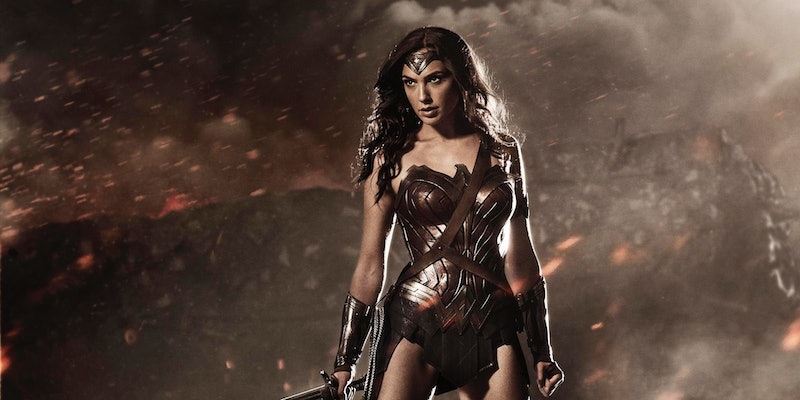 Comic book fans have waited years to see one of pop culture's most well-known female superheroes take on the big-screen: Wonder Woman. Even more so after writer Greg Rucka revealed that Wonder Woman is bisexual, for those who hadn't already gotten the memo. But whether or not her sexual identity will be explored in the film as well was up in the air — at least until now. Gal Gadot spoke about the chance that Wonder Woman will be bisexual in the movies, and, while that won't be explored in the upcoming film slated to debut on June 2, 2017, the actress said it's a definite possibility.

Variety reporter Brent Lang addressed the question to Gadot, referencing Rucka's revelation that took the world by surprise for some reason. And she answered the question like a boss. "It’s not something we’ve explored," she said. "It never came to the table, but when you talk theoretically about all the women on Themyscira and how many years she was there, then what he said makes sense. In this movie she does not experience any bisexual relationships. But it’s not about that. She’s a woman who loves people for who they are. She can be bisexual. She loves people for their hearts."

So, essentially, even though Diana Prince doesn't have a romantic relationship with a woman in the upcoming film, she is someone who loves people for their heart and thus it's completely possible for her to be bisexual. I don't know about you, but this makes me excited that a future film might explore this side of her, or at least reference it. If nothing else, this is very much aligned with the strong female ties already established in the DC's first Wonder Woman trailer.

Legitimizing every sexuality, even when it comes to fictional characters, is something that is gaining more and more attention in 2016. Fans have fought for Disney's Elsa to get a girlfriend, and even speculated on whether or not Marvel's Captain America should have a boyfriend. Representation is incredibly important, especially with how popular superhero movies are, and the LGBT community deserves to see themselves on screen just as much as anyone else. Whether Wonder Woman ever gets an on screen female love interest or not, Gadot is certainly opening up the conversation.

But this isn't the only take on Wonder Woman that might set the DC film apart from other manifestations of the hero in the past. According to Gadot, she and director Patty Jenkins "cared a lot about simplifying Wonder Woman’s agenda, because it is simple. It was her heart that we cared about, not her being this warrior. When you tell a story from the heart, all of us can relate, because all of us want to live in a safe, quiet, and peaceful world."

If nothing else, this is just further proof that DC has chosen the right actress to portray the famous hero, because she's not going to shy away from talking about every aspect of Wonder Woman's character. Fingers crossed for future films, guys. This gives me hope.