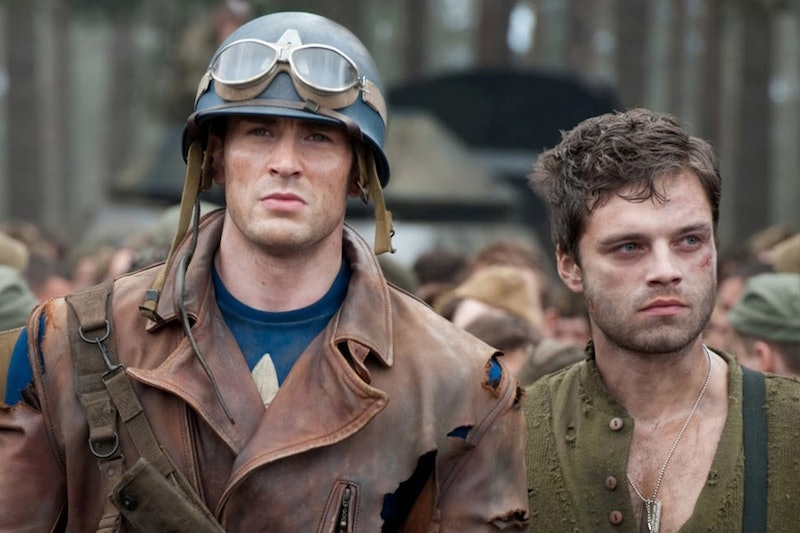 On Tuesday morning, as is often the case, all hell broke loose on the internet. The trending hashtag #GiveCaptainAmericaABoyfriend rose to near the top of the list and stayed there for most of the morning as fans argued over one big idea: Captain America getting a boyfriend. Is that good or bad? Would it be representation or shameless pandering? Should that boyfriend be Tony or Bucky? To be perfectly honest, I've already chosen my side (it would be good representation and the boyfriend should be Bucky), but both sides are making very good cases. When it comes to LGBTQ characters in Marvel superhero movies, there isn't exactly a long list to choose from. In fact, the only one with acknowledged non-heterosexual proclivities is Deadpool... from a movie that came out in 2016. So would giving Captain America a boyfriend be the right move for Marvel? Let's examine the issue.

Civil War spoilers are ahead.

There are a lot of solid reasons for why fans would like to see Captain America explore a relationship with Iron Man. One of the big ones is that the comics do sort of back it up. There is a storyline from Dark Reign: Fantastic Four #2 in which Reed Richards, a.k.a. Mr. Fantastic, searches for alternate universes to see how Civil War (yes, that Civil War) could have ended. In one of them, Tony is not Tony, but Natasha Stark, and Iron Woman and Captain America avoided the events of Civil War entirely by getting married instead. That's a thing that actually happened. Couldn't a wedding happen again, in the actual movies, even if Iron Man is a man this go 'round?

On the other hand, some fans would rather see Captain America and the Winter Soldier hook up. And, honestly, even without the backing of the comics, there's a lot of evidence to support that option, too. If you look back at every single Captain America movie, the most important person on Steve's radar was not one of his on-screen love interests, Peggy or Sharon Carter, but Bucky. After all, Steve traveled alone behind enemy lines and into a Hydra base to rescue Bucky in The First Avenger. It was Bucky's resurgence that unbalanced Steve to the point that he was willing to die alongside Bucky on the sinking Helicarrier in Winter Soldier. And it was partially for Bucky that Steve defied 117 countries, Iron Man, a Wakandan king — and even gave up his shield and his role as Captain America — in Civil War.

If Steve had done even half of what he's done for Bucky for Peggy or for Sharon, this hashtag probably wouldn't have caught as much steam. Steve's relationship with Bucky is the best developed relationship he has, and the relationship that has gained the most screen time in every single Captain America movie. Much like in Dark Reign: Fantastic Four #2, fans have picked up on the idea that, if Bucky were a female character, he and Steve would have gotten together two movies ago. And fans are increasingly less willing to accept "they're just good friends" as an excuse for this kind of a storyline.

But fans are tired of interpreting things. They want an explicit LGBTQ storyline, and they want it now.

Detractors of the #GetCaptainAmericaABoyfriend hashtag make the solid point that, instead of co-opting canonically heterosexual characters in order to pander to fans, Marvel should give more film visibility to the wealth of LGBTQ superheroes in the Marvel comics like Northstar, America Chavez, Ultimate universe Jessica Drew, or Mystique (who, despite being bisexual in the comics, has only expressed attraction to male characters in the films). And that is a great point. Marvel absolutely should give canon LGBTQ characters visibility in the movies. However, this kind of canon purism with regards to Captain America still seems very narrow-minded. After all, why can't Steve Rogers be bisexual in the films? "Because he's not bisexual in the comics" doesn't seem like a plausible answer when Comic Book Steve Rogers also never did things like kiss Black Widow as he did in Winter Soldier; be unworthy to lift Mjolnir as he was in Age of Ultron; or give up his shield just because Tony said he wasn't worthy as he did in Civil War. What about allowing Steve to explore his sexual orientation in the films ruins the character, exactly?

Ultimately, it is absolutely true that LGBTQ superheroes need more visibility. And it is absolutely true that Marvel should put their focus on giving more of their bisexual, pansexual, and asexual characters their own films and storylines in other movies. However, #GiveCaptainAmericaABoyfriend isn't about co-opting a heterosexual character. It's about asking for the MCU to open its new interpretation of an old comic book character to include another interpretation of that character's sexual orientation too. It's about asking for one of Marvel's most prominent cinematic superheroes — the one who stands for truth, justice, and the American way — to help fans understand that people questioning their sexual orientation can be heroes, too. It's about acknowledging that it's easier for film studios to work with an established, popular character than to take a chance on a new one who might not make as much money as Captain America already has. Hell, it's about asking for a payoff following three storylines that involve Steve choosing Bucky over the rest of the world.

Whether or not Marvel actually #GivesCaptainAmericaABoyfriend, and a visible one that is not left up to fans' interpretation, is yet to be seen. It would be a truly progressive move if it happened, and one that fans deserve.