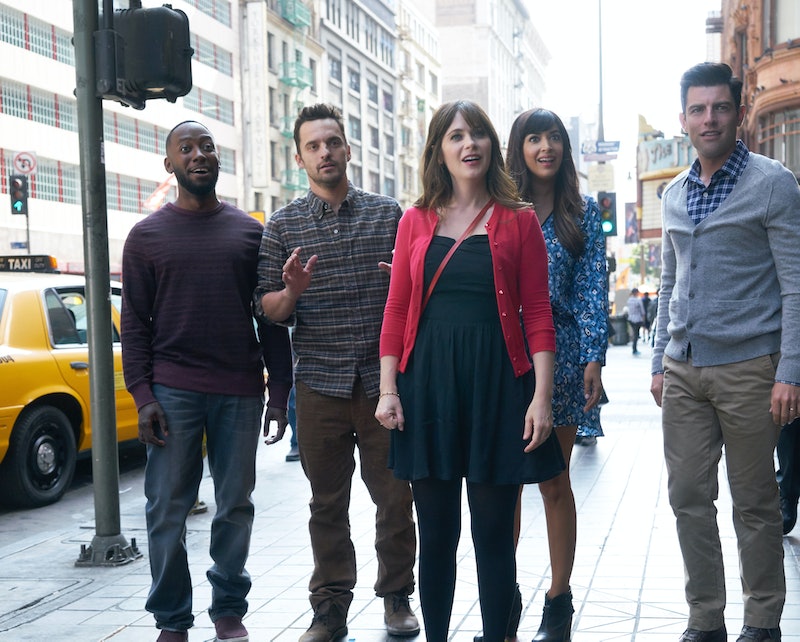 There may have been a lot of hype centered around the Brooklyn Nine-Nine and New Girl crossover episodes, but the latter sitcom actually had another surprise in store, which involved a brief Coach cameo on New Girl 's half of the story. Just when the gang were gearing up to head back to Los Angeles, who should they bump into but their former loftmate on the streets of New York City. And while he initially acted hurt that they hadn't tried to visit him during their stay, it was immediately laughed off since he's done the same thing to them on multiple occasions and the group embraced in a heartwarming hug. Pretty sweet, right? Well, that wasn't the only interesting thing to go down throughout the episode.

After Jake accidentally crashed Jess' car during a police chase, she found herself at the 99th precinct with Captain Holt where she began venting about her former bad experience while visiting the Big Apple. But that's when it hit her — the last time she came to NYC she had such a bad time that she decided to cut her trip short and leave early, which led to her catching her boyfriend Spencer in the throes of an affair, prompting her to move out and find new roommates. So, in a way, New York City was the catalyst that sent her entire New Girl story into motion.

It that tripped hadn't sucked, she may have stayed with Spencer for who knows how long and perhaps never met Nick, Schmidt, Winston, or Coach. So really, New York City is to thank for pretty much all of her most important friendships. That made Coach's cameo all the more special, given that he was initially introduced in the pilot, thereby making the entire New Girl story come full circle, in a way. And here I thought I couldn't love New York anymore than I already do.