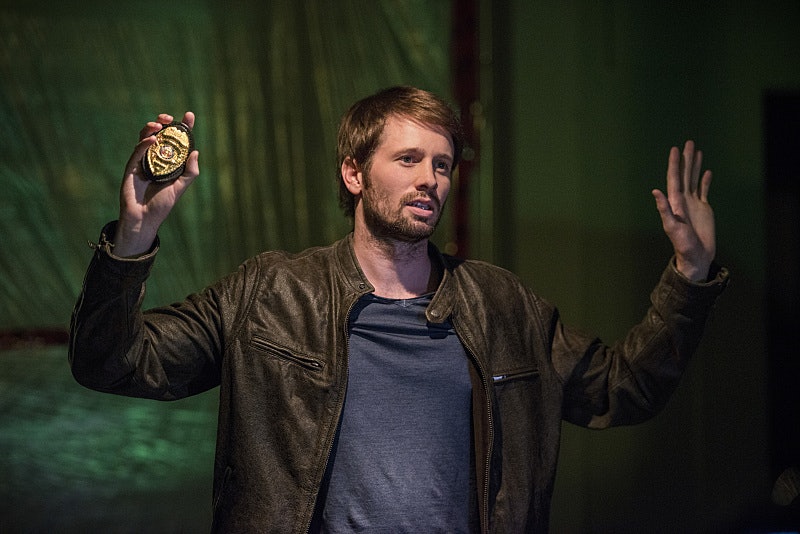 Arrow may be about saving the world and protecting Star City, but it's also about one other big thing: romance. After Olicity fell apart at the end of Season 4, Felicity moved on, and in the Season 5 premiere, it was revealed that Felicity has a new boyfriend, Detective Malone. The detective is a new character, and one who is doing his part to fill in the role of the recently departed Captain Lance in the Star City PD. So far not much has been revealed about Malone, but his name isn't based on any DC Comics character and a SCPD detective has never been a major Green Arrow foe, so it's possible that he's simply is who he claims to be: a nice guy and perfect rebound for Felicity.

But it's rare that a character on Arrow is exactly who they say, so it's not surprising that fans have been closely watching Malone to see if it's possible that he could potentially hold some secrets. For example, he might have some connection with Prometheus — he seems too nice to actually be the mysterious masked figure, but he could have some other connection with him, as his meeting with the Green Arrow suggested. Of course, after five seasons of watching every Star City newcomer turn out to be a villain, this all might be a misdirect and Detective Malone could wind up being a valued part of Team Arrow, rather than a double agent.

If that's the case, his ultimate role may be as a stopgap between the Olicity Season 4 breakup and the potential for Oliver and Felicity to have a better relationship, whether it's romantic or simply friendship. But what's in the past, is in the past, and while the show will likely reveal that Oliver once again wishes he could get back with Felicity, Detective Malone will be standing in his way.

Does Malone have a chance? Well, according to producer Wendy Mericle's interview with TV Guide, Olicity will rear its head in Season 5's fifth episode. "I think there will always be lingering feelings between these two," Mericle said, though she also warned, "we're not necessarily going to see them reconcile this season." Until then, Det. Malone, who so far seems like Oliver's opposite — with his time for supportive backrubs at the end of a hard day — will have Felicity's heart. Fans, however, aren't so thrilled about this prospect.

But how will Detective Malone affect the season besides standing in the way of an Olicity reunion? Well, he's the resident law and order specialist, which means that his opinion on the Green Arrow will be very important going forward. And his working relationship with non-Arrow Oliver will also be important, since as both the mayor and now also some kind of secret Russian gangster (according to those flashbacks), Oliver is going to be juggling quite a few different identities in the rest of Season 5. Malone could either be his biggest ally or a major roadblock.

Only future episodes of Arrow Season 5 will show if Malone is really a nice guy like he seems, or if the's hiding a dark side.