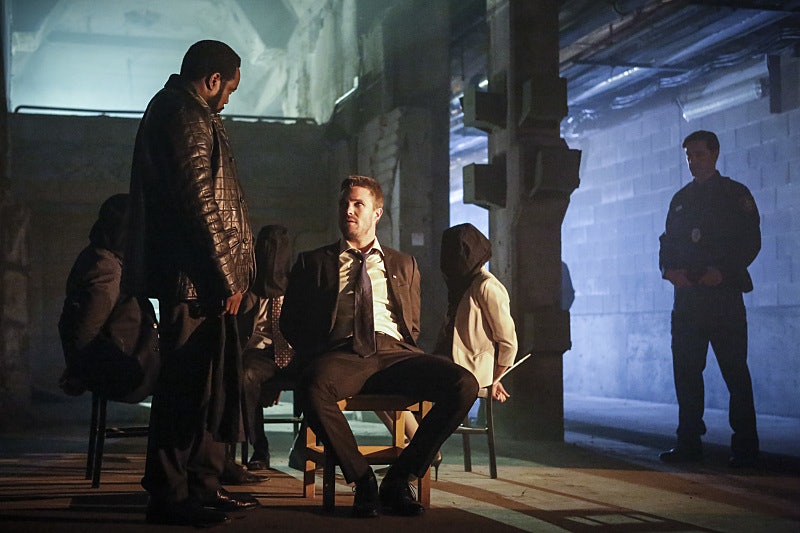 So far, one of the best additions to Arrow Season 5 is new villain Tobias Church, whose status as an original character makes him far more unpredictable than the series' past, comic book-based antagonists. He doesn't have superpowers, he doesn't have a weird quirk, and his goal to unify all of the underworld crime in the Star City will be a bigger and more dramatic journey without the power to control people's minds or travel through time. But because it's fun, and because Arrow loves to keep its viewers guessing, which DC Comics characters could Tobias Church hypothetically become over the course of this season and beyond?

Everyone behind Arrow has been very clear to point out that Tobias Church is just a Star City gangster with an above-average drive to destroy the Green Arrow, not a comic book baddie in disguise. But if that were to change — whether through Tobias receiving transformative powers or being revealed as a major villain in some other way — there are ways to bring comic book history into Tobias' story. From Green Arrow's famous antagonists to characters from the larger DC universe, here's a few people who have enough similarities to Church to make a big twist possible.

This gang, as their name suggests, burned down buildings for the insurance money. It's a simple, superpower-free way to integrate Church into comics continuity as he continues to fight against Oliver.

In the comics, Komodo murdered Oliver's father, and the fact that Arrow somehow hasn't done this storyline yet suggests it's ripe for finally being explored. Komodo, a highly powered mercenary, was already a character in Arrow Season 3, but did not play a very central role. I would love to see Tobias take over his story, because the idea of this personal backstory finally getting some play in Arrow is very appealing.

Chad L. Coleman, who plays Church, told Bustle's Kelly Schremph that one of his major acting inspirations was "Jack Nicholson from the Joker, just enjoying being maniacal. In the comic book world, that's who came to mind for me." Now, I doubt Arrow would bring the Joker into its world, but it's possible that like Nicholson's version of the character, Tobias Church could start as a gangster only to become a total maniac.

This minor villain's whole schtick is that he brought together criminals in order to pull off more ambitious crimes. That sounds a lot like what Church is already planning, so maybe he'll take the chance to adopt a secret double identity when it comes time for him to unite the various villains of Star City.

Here's another character who was technically already on the series, but was missing his signature detail. Though the Season 3 portrayal of the villain was fair, since Brick may have gotten his name from his super-hard skin, in the comics he's primarily a gangster and an underworld kingpin. But he's also a metahuman who was physically transformed into a monstrous-looking creature, even if he's far more accomplished as a gangster than as a super strong, invulnerable villain. This would be a great choice for Tobias, since being bulletproof would be the least of Oliver's concerns when it comes to defeating him.

He's more of a Green Lantern villain (because the two "Green" heroes were paired up in some comics back in the day), but Hector Hammond/The Brain, whose brain swells to an incredible size, giving him supernatural intellect and powers, could be a weird yet awesome direction for Tobias Church. Often, gangsters are portrayed as lacking intelligence, or simple yes-men, but already, Church has proven that he's above that. Maybe next he'll be a full-on super genius, like The Brain.

While most of the villains that have similarities to Tobias Church have no superpowers, it might be fun to see the character go through some kind of physical transformation and become a superhuman like Waxface, a minor villain who can change his appearance in order to better commit crimes.

A crook who's revealed to be an intergalactic gangster? It's a little weird, even for Arrow, but you have to admit that it would be kind of cool if there was a late-season reveal that Tobias Church is really from space like this DC villain.

Of course, even if Tobias Church remains an original character the way he's supposed to throughout Season 5, I'm sure the Arrow writers still have a few tricks up their sleeves.