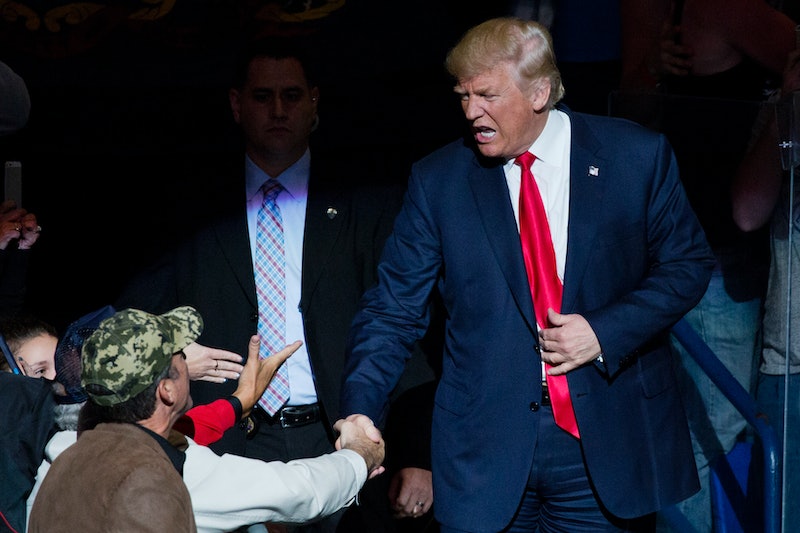 "That is sexual assault. You bragged that you have sexually assaulted women. Do you understand that?" That's what Anderson Cooper asked Donald Trump at the second presidential debate on Sunday. Cooper was referring, of course, to a hot mic tape of Trump doing exactly that in 2005. Cooper point-blank asked if Trump understood that he was referring to a sex crime. And Trump, predictably, said: "No, I didn’t say that at all."

In that moment, Trump didn't mount a defense of himself. He didn't say that he was joking about something he would never do. He repeatedly used the term "locker room talk." And to me, that showed that Trump was implying that the problem with what he'd said was lewdness, and not the actions and mentality he described.

Trump, when pressed on it, denied that grabbing women by their genitals without their consent was sexual assault. And when pressed, some of his Republican allies have said the same. Alabama Sen. Jeff Sessions, arguably Trump's staunchest ally in the Senate, was asked about Trump's comments by the Weekly Standard. He said: "I don't characterize that as sexual assault. I think that's a stretch."

When asked something similar by the Weekly Standard, Republican National Committee spokesman Sean Spicer said: "I don't know. I'm not a lawyer." After that was reported, Spicer disputed he ever said, but The Washington Post reported listening to a recording shared with them by the Weekly Standard, noting it was "of a man who clearly sounds like Spicer, in the spin room, speaking those exact words."

Trump campaign manager Kellyanne Conway went on Fox & Friends and similarly downplayed what Trump was talking about in the tape:

I write about politics. I'm not bothered by cynicism from political operatives. I understand that people will often get down in the muck in order to advance what they believe in. They can support someone for office they think is unfit because they detest the alternative. They can hate some positions of a candidate, but support them for other reasons. And I understand that, for many people, this is a job, and their livelihood depends on their ability to swallow their principles and fight hard.

But at this rate, on Nov. 9, Trump will probably not be president. And yet we will have nevertheless lived through a period of time when people, in order to promote a candidate for office, have told the public that grabbing a woman's genitals without their consent isn't sexual assault. This is a moral problem, not just a political one. This is politics so dirty it cannot be washed off. After the election, the stain will still be there. It will be there in the young men in this country who hear this, even when many are horrified to hear Trump bragging about a crime.

We've heard a lot about "locker room banter." Trump and his allies insist that when women aren't around, men say all sorts of horrible things about them. And yes, I actually have heard some pretty awful things said about women in locker rooms. But from my own experience, that was in high school, when boys, lacking understanding of their new sexuality, latched on to only the violent and gross parts of it, joking about things they knew nothing about.

We grew up. We had someone teach us that we are better than our most animal instincts. For me, it was a camp counselor when I was 15 giving us an important talk before we went to bed one night. All the men I know well have had someone explain it to them. It's hard not to learn as you mature.

When Trump and his team insist that there is any gray when discussing actions this dark, they make it just a little easier for those boys to remain boys and not become men. It doesn't just pervert this election. It goes well beyond the White House. It goes into every house in this country. This is bigger than the most powerful position in the most powerful country in the world. This is about more than who Donald Trump is. This is about who we are.