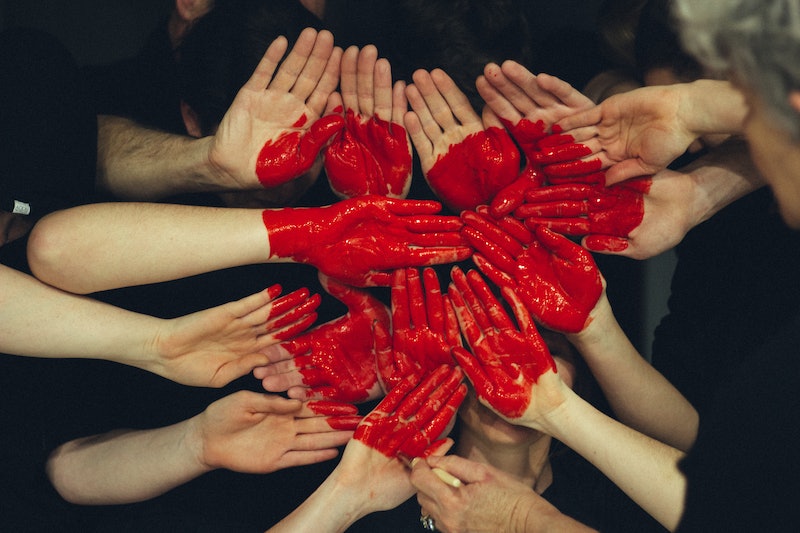 Almost everybody has to deal with bullies in their lifetime, and it's likely possible that you've at least known a bully, whether you were an adolescent or later on in life. Nobody's perfect, but as these 13 anti-bullying quotes for National Stop Bullying Day attest to, nobody should be picked on, ever. So what's the best way to end bullying on a national scale? Start small, because if you can't fix what's going on around you, how are you supposed to solve a nation's crisis?

Bullying can occur no matter your age or situation, and it often becomes disguised the older we get. First things first, take note of your own actions. Is there anyone at work you talk down to? Do you have any friends who you tend to peer pressure into doing things that they don't want to do? Bullying comes in many shapes and sizes — not just in the form of a kindergartener pushing over a preschooler on the playground — so make sure that you're not a part of the problem.

Once you've assessed your own situation, decide if there is any bullying going on around you, be it in your neighborhood, at your school, or in your work place. If so, figure out how you can help. Every situation is different, but you'd be surprised how much an honest talk with a bully or a comforting word to a bullying victim can do to change the cycle.

1. "Children should be able to live a life free from bullying and harassment and it is time that we all took a stand against this." — Katherine Jenkins

2. "I realized that bullying never has to do with you. It's the bully who's insecure." — Shay Mitchell

3. "Most comedy is based on getting a laugh at somebody else's expense. And I find that that's just a form of bullying in a major way. So I want to be an example that you can be funny and be kind, and make people laugh without hurting somebody else's feelings." — Ellen DeGeneres

4. "The whole bullying issue has really struck a nerve with me. It affects so many different types of people at a vital time in their lives." — Kenny Wormald

5. "Bullying is never fun, it's a cruel and terrible thing to do to someone. If you are being bullied, it is not your fault. No one deserves to be bullied, ever." — Raini Rodriguez

6. "Courage is fire, and bullying is smoke." — Benjamin Disraeli

7. "I've been actually really very pleased to see how much awareness was raised around bullying, and how deeply it affects everyone. You know, you don't have to be the loser kid in high school to be bullied. Bullying and being picked on comes in so many different forms." — Lady Gaga

9. "We focus so much on our differences, and that is creating, I think, a lot of chaos and negativity and bullying in the world. And I think if everybody focused on what we all have in common — which is — we all want to be happy." — Ellen DeGeneres

11. "I was of the type who gets bullied rather than the one who does the bullying, which I'm glad about. I'd rather be that than a bully." — Lily Cole

12. "For too long, our society has shrugged off bullying by labeling it a 'rite of passage' and by asking students to simply 'get over it.' Those attitudes need to change. Every day, students are bullied into silence and are afraid to speak up. Let's break this silence and end school bullying." — Linda Sanchez

13. "Simple peck-order bullying is only the beginning of the kind of hierarchical behavior that can lead to racism, sexism, ethnocentrism, classism, and all the other 'isms' that cause so much suffering in the world." — Octavia E. Butler