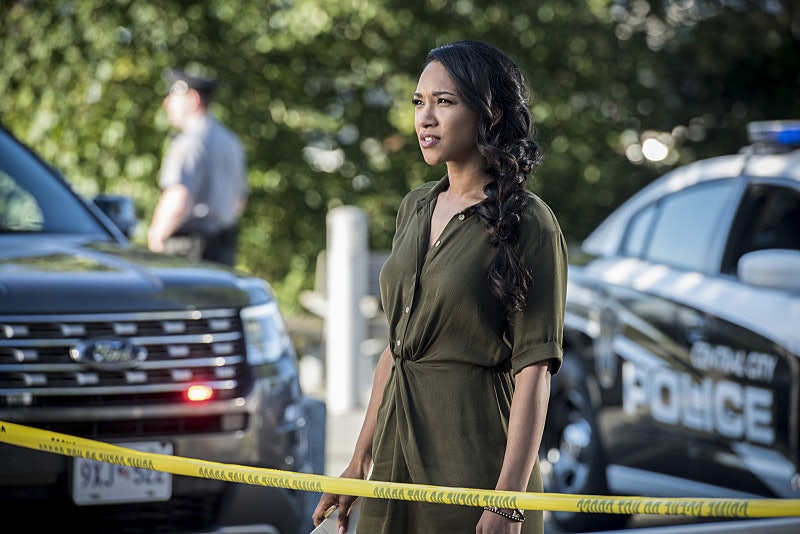 After Barry changed the timeline, and then changed it back, we know that Wally and Iris West are alive. There are many subtle changes that Barry has yet to discover, but at least that much is certain. However, what happened to Iris on The Flash in this new, altered timeline, is still a little unclear. She and Joe aren't speaking, and it isn't even really clear where she is. Is Iris coming back?

Since the above photo is taken from Tuesday, Oct. 11's episode, "Paradox," I think it's safe to say that Iris isn't gone for good. That's the positive news. Now all we have to do is piece together the clues and figure out what happened between them. Why aren't Iris and Joe speaking? Is Iris still a reporter? What is her relationship with Barry in this timeline? Based on the way that Wally and Joe were surprised that Barry even mentioned her, I'm guessing that they don't have one. At least we know that Barry and Joe are on good terms, providing that Barry doesn't bring up his boss and mentor's daughter. On Earth-2 and in the Flashpoint timeline, the two of them did not have the loving, surrogate father and son relationship that Barry knows from before he became The Flash. That animosity seems to have transferred to Iris.

Maybe something happened with Iris and Wally's mother. Maybe this has to do with Eddie, Iris's former fiancé and Joe's former partner. There are plenty of reasons that Iris and Joe could have had a falling out over the years. Maybe, in this timeline, the decision to hide Barry's vigilante identity from Iris had harsher consequences. I really liked the way The Flash handled her anger over being lied to in Season 1, and it would be interesting to see the show explore that again.

Whatever it is, Barry is sure to feel responsible. As a surrogate West, he cares very deeply about Joe, Iris, and their status as a family. I'm sure that, on top of whatever metahuman threat that's plaguing Central City now, he's going to add repairing Iris and Joe's relationship to the top of his superhero to-do list.