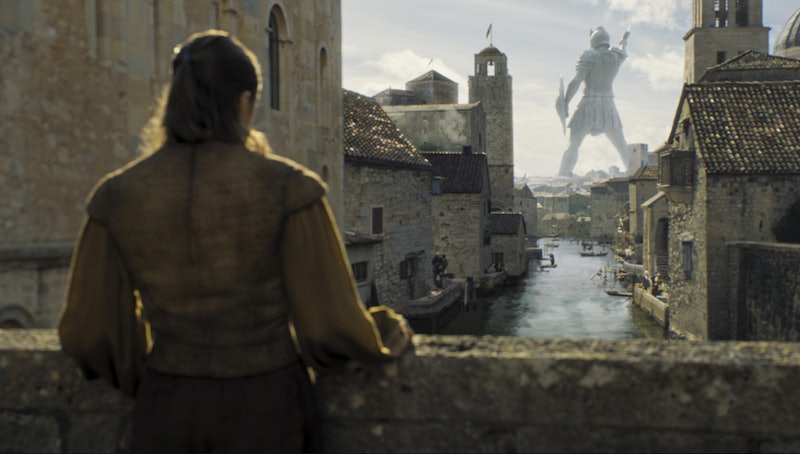 Of all the Starks in Game Of Thrones, Arya is definitely the most well-traveled. In her short life, she's lived in King's Landing, traveled on the Kingsroad, worked in Harrenhal, dealt with bloodshed at The Twins, taken a boat across the Narrow Sea, and lived as A Girl serving the Faceless god in Braavos. But, where is Arya Stark headed next? Based on one very curious Maisie Williams on-set sighting in Corbet, Northern Ireland — as well as the costume the actress was wearing — it seems like the littlest Stark lady might be headed home for a family reunion.

The Daily Mail posted a few images of Maisie Williams exiting her trailer in an outfit on Oct. 11 that resembles what a soldier would be wearing if they happened to be living somewhere as cold as the Westerosi north. The garb also happens to look a great deal like the costume that another fierce warrior girl from Game of Thrones, Lyanna Mormont (Bella Ramsey), often dons. While it's not confirmation of anything, it certainly is telling: It would only make sense that Arya would go home after her many travels, the vengeance killings here and there, and her declaration that she is Arya Stark and she's... well, going home.

The Twins, where Arya was last seen murdering Walder Frey, is pretty much just a hop, skip, and a jump from Winterfell, so the journey will be a piece of cake for someone as resourceful (and able to change her face) as Arya Stark. Theoretically, it will be easy for her to pursue a family reunion. But, after all she's been through, how is that sort of connection going to work for her? My theory is that Arya will come in to Winterfell with the face of someone else. She's been through a lot, so she'd understandably have trouble trusting anyone — wearing someone else's face would be much, much safer.

Or, maybe Arya will head over to Bear Island instead to serve as a guard to the aforementioned Lyanna Mormont. In order for her to destroy those remaining on her list (Cersei, Ilyn Payne, etc) it would makes sense for Arya to pair up with someone who has an undisputed claim to their throne and some money behind her. Their semi-matching outfits definitely point to some sort of similarity, even if that is only in terms of temperament, fashion sense, and location. Those girls seem like they could be the best of allies — they look innocent but pack a serious punch.

Fans will have to wait until Season 7 to really get any straight answers. For now, it seems that Arya Stark will indeed be rocking some northern-style clothes, which is sort of a spoiler in and of itself. Let's just be grateful for the little things.