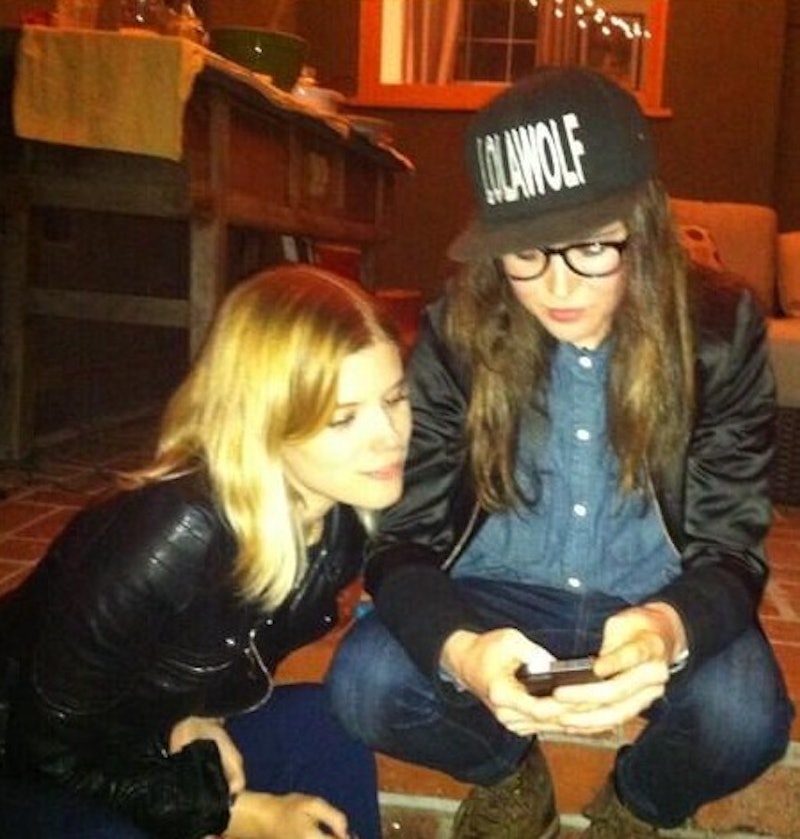 Watching True Detective is a labor of love for anyone who wants to watch a great series with amazing acting and strong female characters. While critics and fans agree that HBO show hit the bullseye on the first two points, it can be a little uncomfortable to acknowledge that the dart missed the board completely on the last — who can forget the way True Detective treated women, most often portrayed as victims or sex workers? (Or, in Michelle Monaghan's case, the tossed around object of affection for Woody Harrelson's Marty and Matthew McConaughey's Rust?)

Well, Kate Mara and Ellen Page are hoping to change that by starring in Season 2 of True Detective themselves. Sort of. Okay, not really, but that hasn't stopped the two from volleying joking tweets back and forth and taking pictures with the hashtag #TrueDetectivesSeason2. So, get ready to dream after seeing this exchange between Mara and Page on the House of Cards star's Twitter feed:

Because, it's true, True Detective is most definitely in need of a female voice when its second season premieres. Sure, the infamous Bechdel Test may not be the only way of telling if a show or movie is completely female-friendly. (Pacific Rim, for example, would fail it, and yet Mako Mori is still a strong female character in her own right. And films that do, like, for example, Snakes on a Plane , don't exactly scream feminist.) But True Detective would be smart, and progressive, should it hire two intelligent women fully capable of solving a complex murder case... without talking about the men in their lives.

And, as the first season of True Detective proved, these characters don't need to be perfect to attract an audience. They don't need to be good, in the moral sense of the word. They just need to be there, with their flaws, their strengths, their brains, their wits, and their relationship with the world taking center stage.

Nancy Drew had Bess and George, Velma Dinkley had Daphne Blake, and Veronica Mars had, well, herself and a taser, but also Cindy Mackenzie. But Page and Mara are inspiring a True Detective with two female leads and talent and chemistry besides. And, hey, if HBO won't take them, then the internet probably will. Make way for the adventures of the #TinyDetectives.