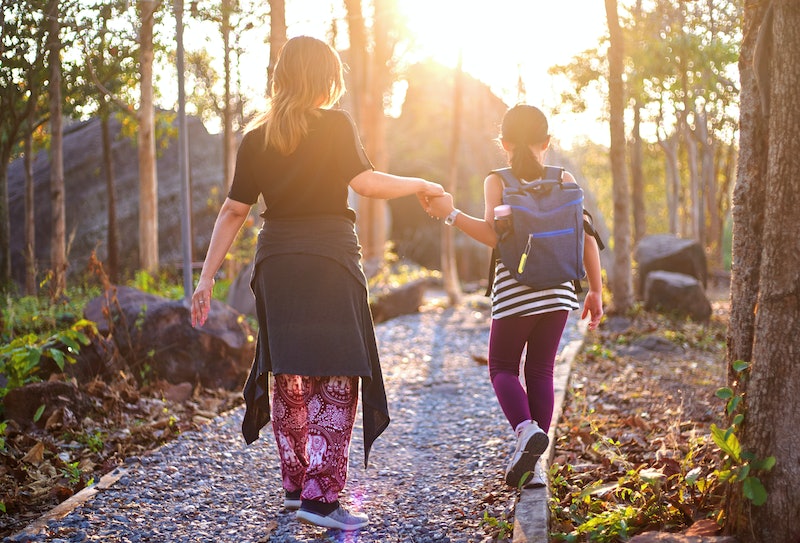 There are (obviously) a lot of factors to consider when it comes to raising children — and unfortunately, the cost of childcare is a major obstacle for many people. For that reason, it's eye-opening to see recent data on the most expensive countries to raise children; indeed, they're not necessarily where you would expect.

Childcare and the overall cost of raising children are pretty complex, and it's important to look at it with an intersectional lens. For example, some communities face additional barriers and layers of systemic oppression that make finances and family planning, including childcare, much more difficult than it is for other groups.

According to a recent report from Society at a Glance 2016, the average costs of childcare in nations participating in the Organization for Economic Co-operation and Development (OECD) is about 15 percent of a family's net income. Statista and the Independent's Indy100 blog compiled the data and put it into a handy chart which ranks the countries which spend the most of their net income on childcare to put it all into perspective:

So what's causing the cost of childcare to rise in these countries? Let's take a look at the factors that may be affecting the top five.

Ah, the glorious land of beans and toast, London fog, and... really, really expensive daycare. According to Daniel Martin at the Daily Mail, there is very little government-subsidized relief for the working and middle class in the UK, which frequently results in families having to choose between people (often women, as is in the case in many places) working and paying the subsequent childcare costs, or staying home and sacrificing their careers. In the UK, the cost of childcare is nearly three times more than it is in Germany or France.

Martin points out, however, that as of 2017, almost all families in the UK will qualify for 30 hours of free childcare per week for children ages 3 to 4 (that is, young kids who haven't yet reached school age). At least there's that!

The land (almost) down-under is apparently also the land of expensive childcare. Interestingly, the costs of childcare in New Zealand is about twice what it is Australia. What gives? The New Zealand Herald suggests that the high price of childcare may come down to New Zealand's "high proportion of private childcare providers seeking profits."

According to Rhian Lubin at the Irish Mirror, parents in Ireland are pretty unhappy with their childcare system overall. Lubin explains that many parents want a change to the "Norwegian model of childcare and early education to be implemented, even if it meant higher taxes and a reduced child benefit payment." As another solution, many in Ireland are calling for the government to subsidize after-school programs.

As someone who doesn't have children, I have to confess that I'm only knowledgeable about this issue by proxy; even so, though, it really is one that affects all of us, whether or not we have kids. Reports suggest that the cost of childcare can be more than the cost of college tuition, which is totally mind-boggling. Here in the United States, the cost of childcare can vary widely depending on what state you live in — and sometimes even what city or district within the state.

In Switzerland, reports suggest that the cost of full-time childcare can be more than two-thirds of the average salary, which is truly jaw-dropping. Samuel Jaberg and Duc-Quang Nguyen at Swiss Info suggest that the lack of government financing leads to the high cost of childcare, in spite of some tax breaks and aid programs already on offer.

While these costs may be kind of scary, it's important to keep in mind that change is possible. Whether or not childcare is an issue you currently have to worry about, it's good to educate yourself on what obstacles others may be experiencing and what we can all do to help make structural changes.