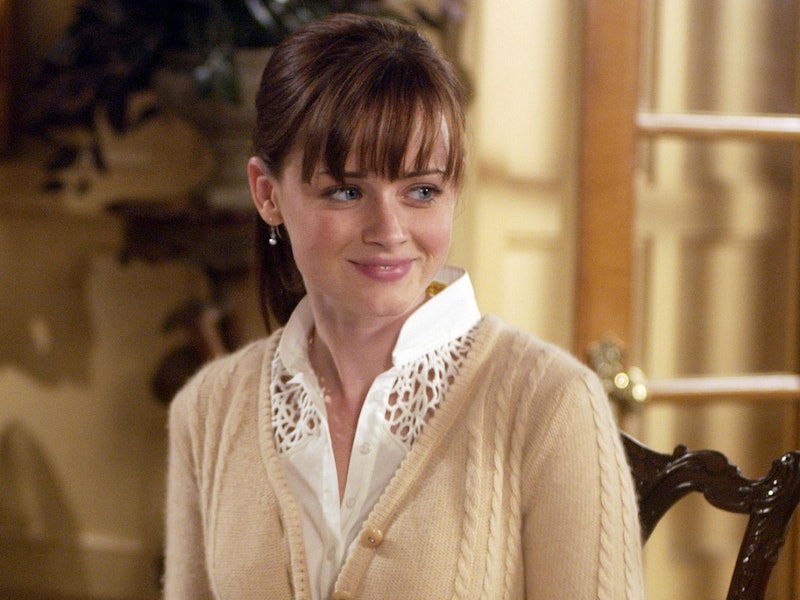 There are so many theories about what might happen in Gilmore Girls: A Year In The Life that it's getting difficult to keep up. Since the show's original run finished way back in 2007, it's natural that fans would speculate about what's been going on with Lorelai and Rory in the years since we last saw them. Many theories revolve around the men of Stars Hollow, and who all of our favorite female characters might hook up with. But some of the most interesting speculation focuses on the women of Gilmore Girls because, obviously, they're impressive, wonderful, feminists, who should be known for their achievements and not just their love lives. That's why I think that my Gilmore Girls theory about Rory that makes a lot of sense.

While I'm fully on board with the idea that Rory ends up with Logan (or Jess, for that matter), I'm also more than OK if she ends up alone. Rory Gilmore has always been incredibly strong and independent, traits she learned from her mom, and, at the end of Season 7, she famously chose her career over her relationship with Logan. She is ambitious, but she loves her family, which is why I think Rory might become a mother in the Gilmore Girls revival.

In Aug. 2016, HollywoodLife posed the question, "Could Lorelai or Rory have a bun in the oven?" in response to a Netflix promotional photo featuring Pop Tarts and an apple. It was a valid question considering the reference to the one time Lorelai craved an apple — when she was pregnant with Rory — and the reference to the study guide snack Lorelai prepared for Rory. The dual meanings of the image meant that this promotional photo was either a smart throwback to Season 1, or a hint that a pregnancy is in the show's future. Since Rory and Lorelai have always shared the same eating habits, generally involving junk food, it seemed likely to me that Rory is, or gets, pregnant in the Gilmore Girls revival.

In Feb. 2016, Amy Sherman-Palladino told TVLine, that Rory is "single in the sense that she’s not married. But she’s dating, like any young woman with that face would be." While this doesn't rule out the idea that she could end up with one of her ex-boyfriends, it also means there's a real possibility that Rory could get pregnant and decide to raise the baby alone. Why? Because she's as independent as Lorelai, who was also a single mother.

The idea that Rory's narrative arc in the revival could mirror Lorelai's feels very possible, and would be perfectly fitting for her character. Never one to settle for anything less than perfection, she wouldn't be with someone just because she got pregnant. Raised to be fiercely stubborn and self-sufficient, Rory would be a brilliant mother. After all, she learnt from the best. She'd also have the support of her loving family and friends around her, if she decided to live in Stars Hollow.

It's easy to get distracted by amazing eye candy like Jess, Dean, and Logan but, at its heart, Gilmore Girls has always been a show about a mother and a daughter. We've followed these two women on such an incredible journey, and it would make absolute sense if the show ended with Rory following in her mother's footsteps by raising a baby in Stars Hollow. Boy drama aside, Rory Gilmore would be an amazing mom, and I hope we get to see her become one in Gilmore Girls: A Year In The Life.