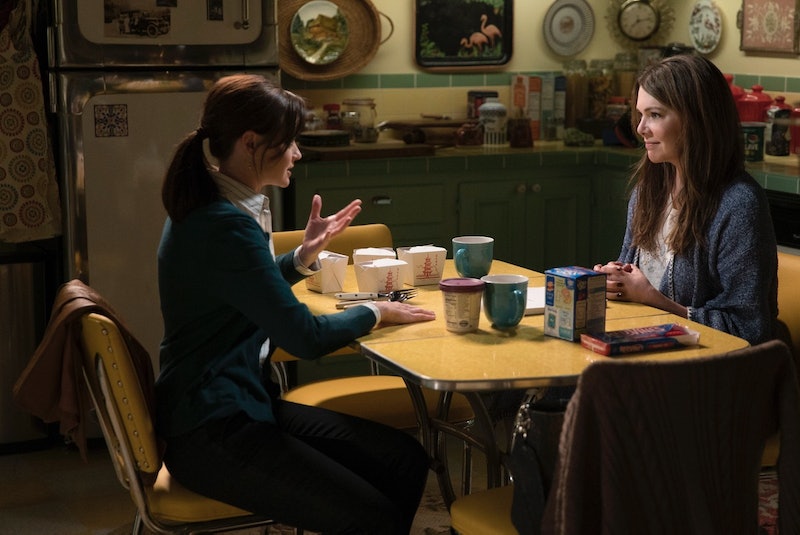 We've being spoiled when it comes to Gilmore Girls related news of late. First, Entertainment Weekly revealed the first page of the reboot's script, and it was all kinds of awesome. Now, Entertainment Weekly's latest Gilmore Girls interview from their September 16 issue has arrived on the internet, and it's everything. Featuring an interview with stars Lauren Graham and Alexis Bledel, many pressing topics are covered, but perhaps most important is the mention of Rory's love life in the Gilmore Girls revival. While fans are desperate to find out what's happened to all of the characters, the mystery sounding Rory's boyfriends is always a topic of excitement. But, in the new interview, Graham is quick to point out that Gilmore Girls: A Year In The Life is "sneakily feminist," and here's why that's important.

The actress is clear that Gilmore Girls is a feminist TV show, and always has been. She tells Entertainment Weekly that, when it comes to Lorelai and Rory, "Their main strength is that they have themselves and each other." As fans know, this is absolutely true of the mother and daughter, who have supported each other through a multitude of life changes and relationships. As well as being the best team, Lorelai and Rory are both fiercely independent, and are clearly capable of looking after themselves without needing a romantic relationship.

Bledel unanimously agrees with Graham in the interview, and, when asked whether she'd considered who her character Rory would end up with, she says, "I was wondering what she had accomplished in her career." She makes an incredibly important point here, particularly when looking at Gilmore Girls through a feminist lens. Rory Gilmore is extremely accomplished, works hard, and has so many aspirations for the future. Why, then, is Rory's list of ex-boyfriends the only thing that anyone seems to care about? It makes total sense that Bledel was excited to see where Rory ended up career-wise, as the book worm and newspaper editor had so much potential when the series ended in Season 7.

Graham also uses the interview as an opportunity to talk about the endless discussion surrounding Rory and Lorelai's love lives. The actress says, "The show is sneakily feminist in that it's always been great for them to have love, but they're also OK when they don't. It's why we sometimes bristle at 'What team are you on?' It's like, 'It doesn't matter.'" As the main characters in Gilmore Girls, it shouldn't matter who Rory and Lorelai end up with. It's natural that fans are keen to find out what's happened in the interim years since the series ended, but both Gilmores are interesting and accomplished women who are sure to have achieved so much — regardless of who they might be dating.

It's exciting to hear Graham and Bledel talk about their characters, and the direction they're going in when Gilmore Girls returns. Clearly, they both care about Rory and Lorelai as much as their fans do, and want the best for them.

More like this
The 'Hocus Pocus' Sequel Finally Has A Release Date & It Makes Total Sense
By Shannon Barbour and Radhika Menon
Here's How To Stop Being Codependent In Your Relationship
By Madeline Howard
How To Respond To A Partner Who’s “Stonewalling” You
By Marilyn La Jeunesse
Are Gemini & Scorpio Compatible In A Relationship?
By Kristine Fellizar
Get Even More From Bustle — Sign Up For The Newsletter