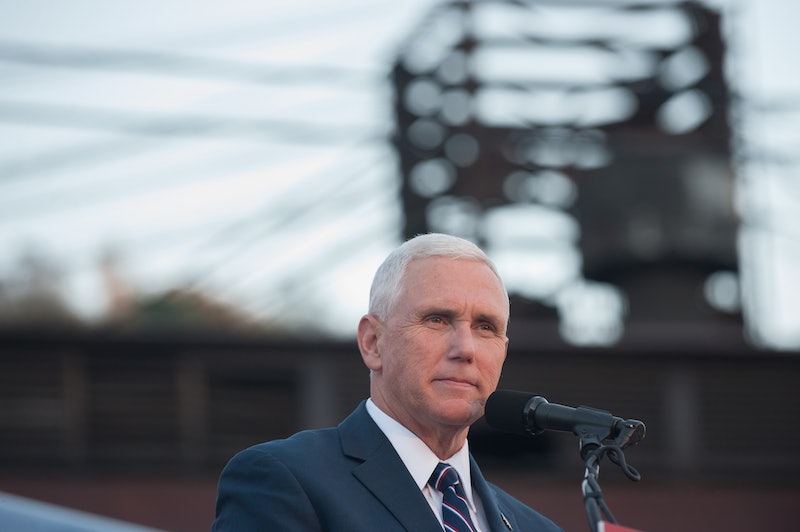 The full reality of the Trump movement may just now be hitting Mike Pence. At a rally in Iowa on Tuesday, Pence was confronted by a woman calling for revolution if his running mate, Donald Trump, isn't elected into office on Nov. 8. “I will tell you for me personally, if Hillary Clinton gets in, I myself, I’m ready for a revolution, because we can’t have her in,” said the woman, who has not been identified. Although Pence largely kept his composure, he quickly responded negatively to the woman's call for action. "Don't say that," Pence said, accompanied by one of his now-infamous head shakes. "There’s a revolution coming on November the 8th, I promise you.”

The clip demonstrates something many people already knew. Many Trump supporters don't trust the election, and won't be satisfied unless Trump wins. The same could be said for Clinton supporters, but thus far, none have talked that publicly of revolution if Trump wins. Trump's own harsh, vulgar, repugnant words have made the idea of revolution seem almost tame, but it's unclear if Pence got the full scope of that before signing on to be Trump's running mate. Pence maybe was supposed to be the calm in the storm that would remind people that the world will keep spinning if Clinton is elected, but this video seems to categorically reveal that even he doesn't have the clout within the Trump movement to dissuade people from these radical ideas.

Furthermore, this clip just illustrates how dissimilar Trump and Pence really are as politicians. Pence is an establishment darling who worked his way up the ranks with quiet, measured rhetoric, whereas Trump is literally exactly the opposite. He came out of nowhere with hateful words, trying to instigate controversy and conflict without much of an overarching moral principle to follow. Pence, who has at least had his religion to ground many of his political decisions, seems really out of his element with this vague talk of revolution not staked to any firm plans or ideology. Even as problematic as his politics may be, there's a certain predisposition toward pity for Pence. Maybe he got into this for the right reasons, wanting to guide the party and its nominee back toward a more purely conservative vision. But that hope, if it was there, is certainly gone now.

Ultimately, however, it's still Pence's fault that he signed on to this campaign. Since the very beginning, Trump has been stoking the fires of people's legitimate anger with inflammatory words and spreading distrust in American political institutions. Even before Pence agreed to be the vice presidential candidate, Trump was talking about the "rigged election" and how the mainstream media was secretly working for Clinton. Trump has been breeding distrust in the democratic workings of the American electoral process since way before Pence become his running mate, so the Indiana governor should hardly be surprised that people are incited to act upon that augmented anger.

Obviously, people have the right to say whatever they want — that's the coolest thing about the United States. However, the woman's comment is really inflammatory language, which is allowed but shouldn't be encouraged, and that is exactly what Trump has been doing for the last year. Helping to incite a revolution probably wasn't on Pence's political agenda, but it's what he's got now. What Pence does going forward will be telling, both for the election and his own future in politics.