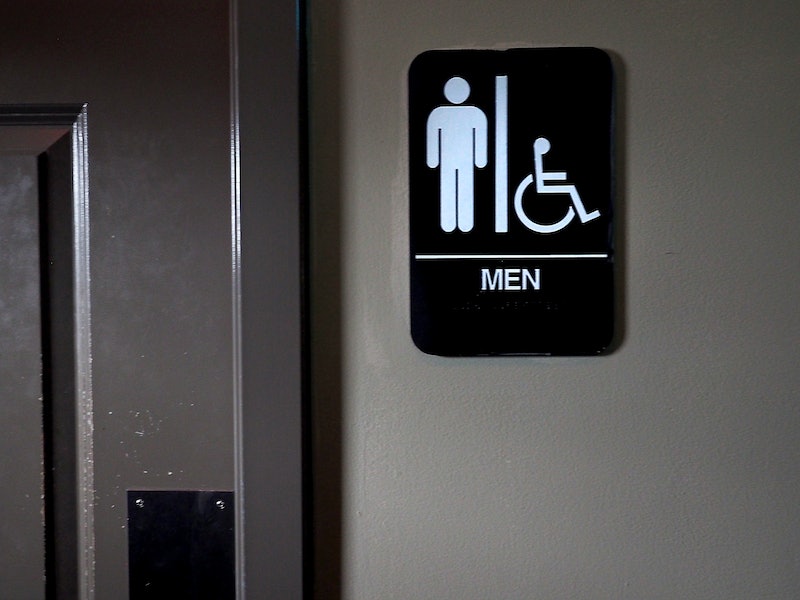 It shouldn’t be a shock that sometimes dads need to change babies’ diapers, but, given the dearth of changing facilities in men’s restrooms, you might think that most fathers have never encountered a wet nappy. Thankfully, President Obama has signed a law requiring that men’s bathrooms have baby-changing stations, at least in public federal buildings. It’s a simple thing, but it’ll go a long way to promote equality in parenting, and ensure that both moms and dads have sanitary places to change their babies.

The fact that most men’s bathrooms don’t already have stations for changing babies’ diapers is ridiculous. It’s wrong on an ideological level — because it implicitly assumes that changing diapers (and childrearing in general) is a woman’s job — but also a practical one because the fact is, there are a lot of men out there who have babies and who contribute to their care — guys who share childrearing duties with women, guys who have kids with other guys, and guys who are single parents. And these men shouldn’t have to struggle to find appropriate facilities to manage one of the most basic aspects of infant care.

Fortunately, taking care of a baby in public just got a little bit easier. In April, Rhode Island congressman David Cicilline introduced the Bathrooms Accessible for Babies in Every Situation Act, aka the BABIES Act, requiring that “all publicly-accessible, federal buildings be equipped with baby-changing facilities in both male and female restrooms.” On his website, Cicilline explained,

No mom or dad should ever have to worry about finding a safe, sanitary place to change their baby — least of all in a federal building that’s paid for by taxpayers. The BABIES Act is a commonsense proposal that makes government buildings more welcoming for families and helps promote good public health.

In September, the House passed the bill by a bipartisan vote, and Obama signed it into law last week. Within the next two years, publicly accessible federal buildings (including federal courthouses, congressional buildings, Social Security offices, and some post offices) will have to make available at least one “physically safe, sanitary, and appropriate” changing station on every floor. To be clear, this law only impacts public federal buildings, but hopefully it will encourage businesses, restaurants, and other venues to install changing tables in both their women’s and men’s restrooms.

This law has been a long time coming, with many people campaigning for years to have more dad-inclusive changing facilities. In 2015, Ashton Kutcher complained about the lack of changing tables available to fathers, and started a Change.org petition to remedy the problem. New York State Senator Brad Hoylman and California State Senator Ricardo Lara have both campaigned for “potty parity” at the state level, as have a number of male bloggers, and regular fathers who all just want a clean place to change their kids’ diapers.

We all know that President Obama loves babies, so lets celebrate his signing of the BABIES Act with some Obama-With-Babies greatest hits: