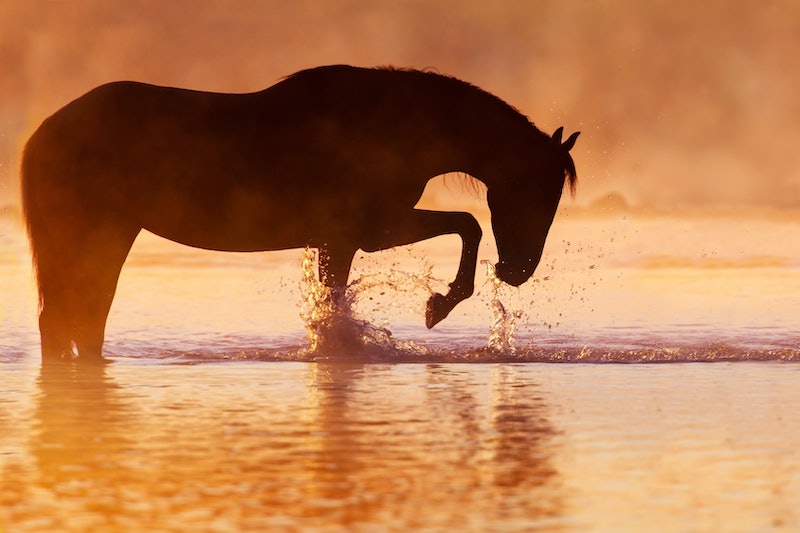 Mythical creatures have always fascinated me. Yes, I'm one of those people who believes in the Loch Ness monster and mermaids, and I don't care what anyone says. As such, this recent AskReddit thread discussing creepy creatures from folklore around the world kept me occupied for an embarrassing amount of time, because, well... there are so many bizarre beings I've never even heard of, and that's fascinating. Think things that will suck your blood, and shape-shift, and chase you in your car. Cool, right? I mean, even if there's no solid evidence to confirm their existence, isn't it fun to believe in something so magical? (Yes.) While my gut tells me you won't be running into these guys anytime soon, it's still incredibly fun to imagine.

Each story has several versions and variations, but the general theme is pretty similar across most of them. These tales have been terrorizing and haunting cultures for generations, with rumors of creatures that will pull you into a lake or harvest your guts while you're trying to sleep. They're vicious, they're evil, they'll make you want to sleep with the lights on.

But hey, it's October. So, in the spirit of Halloween, read on for some freaky stories about mythological creatures from across the globe.

According to some legends, Mothman is as big as seven feet tall and makes a terrible shrieking noise. There have been numerous rumored sightings of the freaky creature, including one in 1966 near an abandoned factory from World War II, where the creature reportedly chased the witnessing family in their car going over 100 miles an hour. There were several more sightings the next year, where the Mothman was spotted hovering over the town's bridge. Reports became less frequent after the bridge collapsed, and stopped completely after it was demolished. (Have you seen The Mothman Prophecies? That's what I'm talking about here.) Some believe that the creature shows up before disasters and tries to warn people. That's very admirable for such a terrifying being.

This vampire-like creature of the Philippines is said to be an evil, blood-sucking monster. It preys on sleeping victims (both men and women — no gender discrimination here). They're said to hate garlic and salt, so make sure to keep a healthy supply on hand.

Tiyanak comes in the form of a precious baby — but wait! It's actually another vampire from Philippine mythology and lures people with its crying. Once it attracts them, Tiyanak reverts to its true form and attacks its latest victim.

Many places around the world have their own version of this mythical being. In Canada, they have Sasquatch. In the Himalayas, they have the Yeti. Here in the US of A, we have Bigfoot. He's often described as being seven or eight feet tall, with a strong brow, a head like a gorilla, and enormous feet — as big as two feet long.

Some stories of Black Annis portray her as an old, haggard, one-eyed woman with sharp teeth, long, black nails, and a blue face. She hides in the trees and attacks unknowing travelers. She feasts on human flesh and hangs it on the walls of her cave like trophies. Black Annis is said to have dug the cave using her sharp claws.

Aaaaaand I'm never getting on a horse again. The nykur is, by some stories, able to shapeshift and change itself into nearly anything, living or dead. One of the few defenses one has against it is to say its name. One tale tells of a sleeping girl who was being dragged into a lake by a nykur. She woke up in the middle of it and yelled, "Leave me alone, nykur!" The horse immediately dropped her and disappeared into the water.

This tiny being from Wampanoag folklore, no more than a few feet tall, still resembles a human, excluding its giant nose, ears, and fingers. Its skin is smooth and gray, and sometimes it glows. They can appear and vanish at will, shapeshift into a sort of porcupine, use magic, shoot poison arrows, and create fire. Once friendly with people, they turned on us and will kidnap, attack, and blind their victims, and even push them off cliffs.

Stories have circulated throughout Japan about the existence of giant, human-shaped creatures, white in color, that live in the icy waters of the Antarctic. They have arms, legs, and even five-fingered hands that look like our own. Other tales talk of fins and mermaid tails instead of legs. They only like to come out at night, making them even harder to photograph. What's more, they can also be mistaken for chunks of ice. The cool part is that the Antarctic is still largely unexplored, meaning that it's totally possible the Ningen is real.