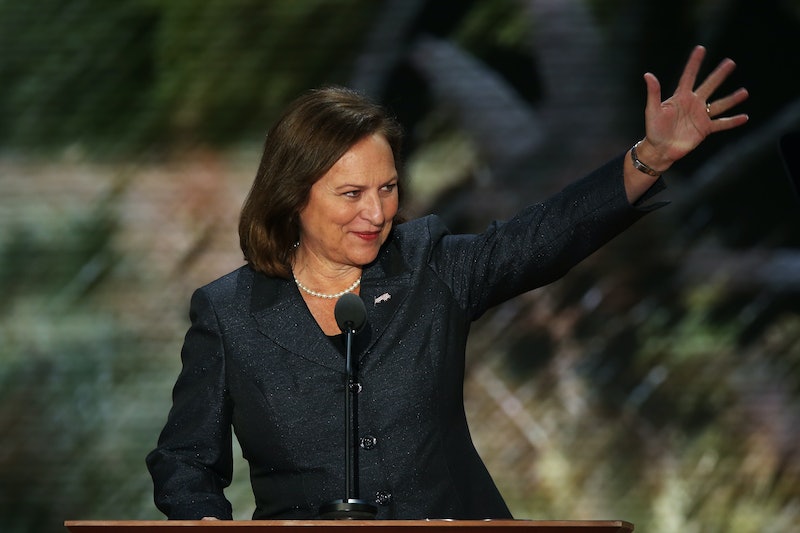 Republicans who condemned Donald Trump's comments in a leaked 2005 video already seem to be warming to the candidate yet again. Nebraska Senator Deb Fischer renewed her support for Trump on Tuesday, days after calling for him to resign from the ticket. This back-and-forth support among GOP members shows how quickly they're willing to forgive and forget what are truly unforgivable actions.

Fischer's initial response to the tape — in which Trump can be heard describing sexual assault and boasting about what he perceives as his desirability to women — was a call for Trump to step aside. She even called his comments "totally unacceptable" and "disgusting." However, 72 hours later, Fischer had completely changed her tune. She denied that she had ever said she would not vote for the Republican ticket.

Moreover, her justification for supporting Trump in spite of his comments centered around his refusal to quit the race. Since Trump refused to drop out, she seemed to say, you might as well vote for him. Forgive me if I don't find her logic tremendously persuasive.

The many Republicans who condemned and re-endorsed Trump over the past week are obviously caught in a bit of a bind. They want to seem like loyal party members — and, I imagine, to reap the benefits of party membership, particularly fundraising — but they don't want their constituents to think they support Trump's vile comments about women, even if the comments don't actually bother them very much.

Fischer's wavering is indicative of bigger problems within the Republican Party. Establishment politicians who see their party's declining support among key demographics, particularly women, are panicking as they see their future electoral chances jeopardized by the polarizing nature of their nominee. Yet the party doesn't want to openly reject its nominee, either, partly because many Republican voters do support Trump, and losing those votes in local or Congressional elections could be calamitous.

Members of the GOP are stuck between a rock and a hard place, as they decided to either condemn Trump and garner favor with the moderate voters who could break electoral ties in the future, or embrace Trump and ensure the short-term benefits of capitalizing on his extreme popularity with a subsection of the Republican base. Fischer, like many Republicans, is struggling to have it both ways.

Nobody embodies this problem more than House Speaker Paul Ryan, who continues to say he will vote for Trump, despite the fact that Ryan has called Trump "racist" and claimed to be "sickened" by the comments in the Trump tape. However, Ryan will not continue to campaign for Trump. In response, Trump told Bill O'Reilly that he didn't want or care about Ryan's support.

Ryan's would-be middle way seems only to have alienated both groups he sought to keep, and the actions of Fischer and others in the party make it clear that the GOP is completely unsure of how to continue during this election cycle. Theoretically, the party could consolidate itself once more after the election, but the party's current disarray seems like it will be very hard to undo.