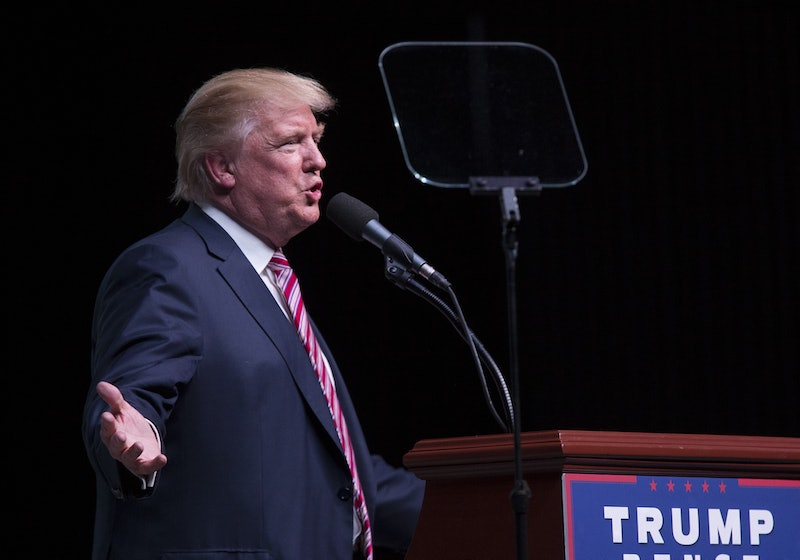 In the wake of the release of a 2005 tape in which Republican nominee Donald Trump was recorded talking about "grabbing [women] by the p*ssy" and kissing them without their consent, the Republican Party is having what might generously be called "an infighting problem" right now. But even as many Republican officials stand by Trump, a series of tweets from Republican Marybeth Glenn shows they're risking a lot by not denouncing him. "This particular tweet storm was about Trump," Glenn, a Christian conservative and blogger, explains to Bustle in an email, "but more about the fact that after the tape surfaced of Trump bragging about being able to sexually assault women, the elected officials I had supported for so long refused to revoke their promise to vote for him." The effects of so many officials refusing to unendorse Trump might last for years to come — and it could be very bad for everyone, not just Republicans or the Republican Party.

As Glenn points out, the fact that many other Republican leaders have not withdrawn their endorsement of Donald Trump in the wake of this latest story is a big deal. True, not all Republicans have stood by Trump. Although it is too late to replace Trump's name on the ballot now that early voting has begun in many states, many Republicans have called for Trump to drop out or have, at the very least, withdrawn their support. But many others have not denounced him at all. For instance, while Paul Ryan, has said he will no longer defend Trump, he has also declined to withdraw his endorsement.

And that sends a message to women voters, including Republican women who have had to watch their party stand by a man who has spoken about touching women's genitals without their consent and kissing women without permission — and who boasted he can get away with it because he's rich and powerful.

Many conservative women have taken issue with the party's response, including Marybeth Glenn, who tells Bustle that she's "been #NeverTrump since Trump announced his candidacy." She took Twitter to voice her outrage in a series of tweets that have rocketed around the internet in the days since she wrote them.

As Glenn points out, this loyalty to Trump is not only a slap in the face of the millions of women who have stood by the Republican Party since long before Trump decided to run for office. It's also a pretty terrible long-term strategy for Republicans.

Overall, women tend to lean more towards the Democratic Party, but around 25 percent of all registered women voters still identify as Republican; indeed, in 2012, 44 percent of women voters cast their ballot for Mitt Romney. This means that women still represent a large part of the Republican Party. If Donald Trump alienates Republican, women he's unlikely to win the election — but it doesn't end there. If women desert the Republican Party because they feel the leaders don't respect them or understand their concerns, that could cripple the party for years to come.

But Republican leaders' potential worries don't end with leaving themselves open to charges of sexism, or even pissing off female voters. It's what happens once women start leaving the party that should not only scare the Republican leadership, but all of us who live in this two-party system.

The vision Glenn lays out of what life might be like in a post-Trump world is pretty concerning for both Democrats and Republicans. In a country with a two-party system, we the people rely on both parties to work for the good of the country and to both push each other to be better — so that ultimately, no matter who is in power, the country wins. But if one party is increasingly controlled by people who are openly racist, sexist, and bigoted, the whole nature of that relationship changes.

In that scenario, we'd basically be living in a world where we're either going to have a de facto one-party system with Democrats always winning national office, or we're going to have to accept that a party heavily influenced by open bigotry is going to have control over people's lives. Both of those options are terrible, but if the Republican Party keeps alienating voters like Marybeth Glenn, it's also clearly a very real risk.

There are some encouraging signs, though. For one thing, Glenn says the reaction to her tweet thread has been largely positive — though, of course, not entirely. "I've been getting a lot of support from both sides of the aisle; it's been overwhelming, to be quite honest. From TV/Movie stars to political activists from the left and right, so many people have been incredibly encouraging," she tells Bustle. "I've had a few 'get back in the kitchen' or 'we need to repeal the 19th Amendment because of women like you' comments from die-hard Trump supporters, but for the real conservative women who have been speaking out against him for so long, their vitriol is nothing new."

So what is Glenn planning to do about this election? She's decided to vote for a conservative candidate she feels best exemplifies her political convictions: Evan McMullin.

McMullin, who hasn't received the same attention that third party candidates like Jill Stein or Gary Johnson have, is a former CIA operative, senior advisor to the House Committee on Foreign Affairs, and chief policy director of the House Republican Conference. He only announced his candidacy in August of this year, but a recent poll has him in a statistical three-way tie with Trump and Clinton in his home state of Utah — meaning he might be the third party candidate with the biggest chance of actually winning votes in the electoral college.

For Marybeth Glenn, he's also a candidate she can get behind.

"He's a strong advocate for my brand of compassionate conservatism, pro-refugee, pro-immigrant, pro- small government, etc., and exactly what our movement needs to begin rebuilding," she says. His running mate, Mindy Flynn, is also a woman, one that Glenn says "women like myself can be proud to stand with."

Hopefully, the Republican Party will recover from the Donald Trump effect, will shake off the racist and sexist voices that are so dominant now. If they don't they are clearly going to lose more moderate voices like Marybeth Glenn.