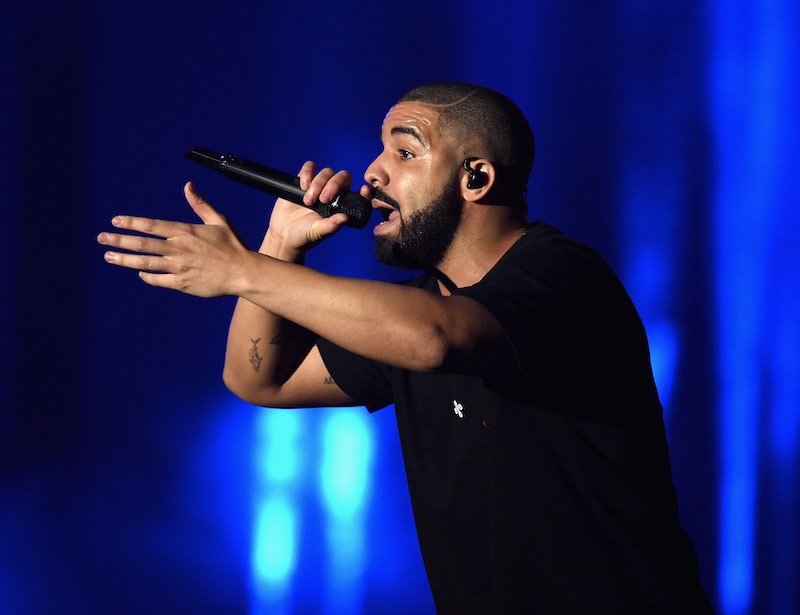 Judging by a dark post on Drake's Instagram that came only a day after reports of the singer and Rihanna breaking up spread across the web, it may really be over for them. Though, the "Too Good" singers never even explicitly confirmed they were together, does Drake's Instagram confirm he and Rihanna broke up? On Tuesday, a slew of reports came out claiming that DriRi called it quits. A source told E!, “Rihanna and Drake are seeing other people at the moment. They are not exclusive anymore. They still love each other, but their schedules have gotten in the way ... Anything can change between them though, for better or worse. They are still in each other's lives." At the time, Bustle reached out to Drake and Rihanna's reps for comment, but has yet to hear back.

The news was pretty sad. But also pretty confusing when considering the fact the couple never actually confirmed that they were dating. Yes, Drake revealed that he was in love with Rihanna at the VMAs (and had been his whole life). And yet still, the two never confirmed anything about a relationship, despite the fact that they appeared to be dating for months and were even caught in some public displays of affection.

But, the relationship seems to have ended just as mysteriously as it began. Drake’s recent posts on Instagram are now factoring into his relationship status. He posted a sad picture with the caption, “Too mix up in drama to free my mind but I'm praying for you even in your darkest times.” He punctuated the statement with an emoji skull, just in case the post wasn’t depressing enough.

In addition to learning that sad Drake makes us all very sad, fans also gleaned that things are probably over between he and Rihanna. Though, this pain may also be a source of inspiration for the recording artist. Hours after his first cryptic post, he followed up on Instagram with a picture of himself at work, captioned with an emoji light bulb. Heartbreak can be a source of inspiration, I just wish it wasn’t in this case.

But, who knows? Maybe a skull is just a skull and a light bulb is just a light bulb? Considering the fact that we have been kept in the dark regarding this relationship, there is a lot we don’t know. Let’s just hope the couple will reconcile and that this is just a rough patch. Because we need more Drake and Rihanna in the future.