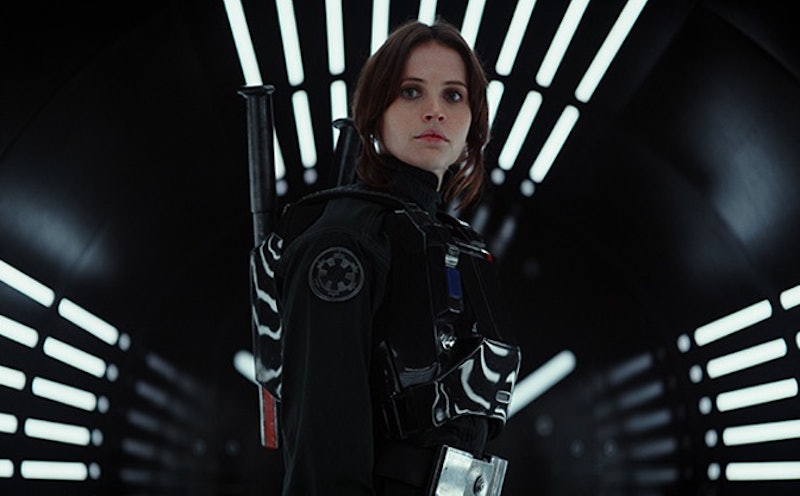 Make sure you're sitting down, Star Wars fans, because this is about to blow you away. A new Rogue One poster has arrived, and not only is it stunning, it puts Felicity Jones right up front. This is huge for the franchise, as it's the first Star Wars poster to put a woman this prominently (The Force Awakens post put Rey at the center, but she is dwarfed by Kylo Ren above her), and make it clear that Jones, a woman, is the indisputable star of the next film from the most famous sci-fi franchise in history.

It is a sad reality that women are often marginalized in marketing campaigns for sci-fi and fantasy movies, even when they are the star. This is always depressing to see, especially for female fans of sci-fi. By having Jones' character take the lead on the poster — while also protraying her as a strong fighter — Disney is making a bold statement: this Star Wars movie is led by a woman, and you are going to like it.

To which I say, bravo! Rogue One looks amazing and putting the focus on Jones' character is only going to heighten my interest in the movie. Who wouldn't want to see a layered female character leading the resistance against Vader? This is the stuff Star Wars fans' dreams are made of.

Set before the events of A New Hope, Rogue One is set to reveal a brand new part of the Star Wars universe. Before Luke had a chance to discover his special destiny, there was already a resistance movement working behind the scenes to disrupt the Empire. Jyn Erso (Jones) is a key member of the rebel group, who along with a band of unlikely allies, makes it her personal mission to chip away at Vader's control. In other words, she is the hero the Star Wars universe forgot about until now.

Jyn is not the first female character to play a major role in the Star Wars franchise — Leia, Padme, and Rey have all been integral to the story — but she is the first to lead an ensemble cast all on her own. Seeing her take her rightful lead place on the poster is like Disney is promising young women everywhere they care about telling stories about their adventures too, while also encouraging young men not to close themselves off to stories centered around women. It may not seem like a big deal, but the Rogue One poster is seriously important.

Star Wars gains new fans all the time, and many of those fans are kids. While Star Wars is often seen as a "guy" thing by its first generation fans, both Rogue One and The Force Awakens have made it clear the franchise is inclusive — not only to women, but to people of color (the Rogue One cast is wonderfully diverse). Sci-fi stories are for everyone, and the new Rogue One poster is going to make sure no one misses the message by not downplaying Jyn's role.

This is a brave new world for Star Wars, and it is one I cannot wait to visit.

Editor's Note: A previous version of this post mistakenly implied that no Star Wars poster had previously placed a woman in the center.