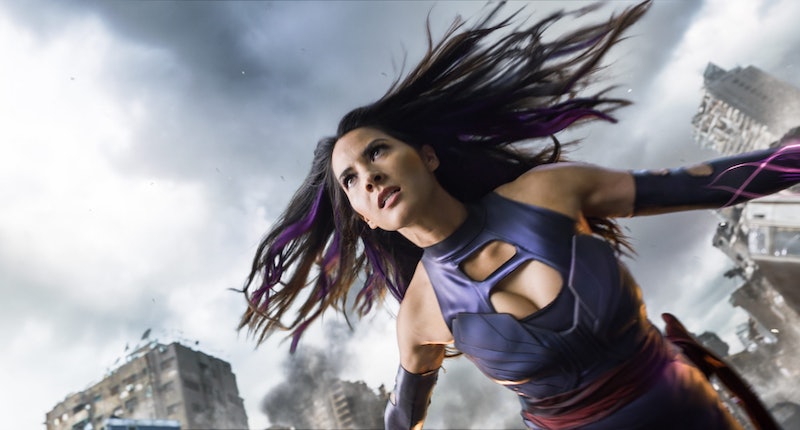 The X-Men franchise has spawned six films, not including the various spinoffs and solo movies, and yet to me, they seem like they've all been pretty much about the same thing: two white men — and their primarily white allies — fighting. Seriously, every X-Men movie can basically boil down to Charles Xavier and Magneto arguing over what they see as the relationship between mutants and humans. And while the conflict is one that warrants multiple films, it's also one that's grown increasingly tired, especially when the diversity of the cast remains shockingly low. The latest film in the franchise, X-Men: Apocalypse, has a serious diversity problem, and it's one that both diminishes the film's central conflict and feels like a huge slap in the face to viewers who thought they'd be seeing a less-white X-Men going forward.

After receiving a fair amount of criticism for the lack of diversity in X-Men: Days of Future Past (most non-white mutants were dead in the first five minutes), the announcement that X-Men: Apocalypse would feature three new(ish) non-white mutants was more than welcome. Pre-production buzz and early trailers promised roles for three major characters — Storm, Jubilee, and Psylocke — played by actors of various non-white ethnicities. It was a pretty big deal, particularly since Jubilee and Psylocke (as played by Lana Condor and Olivia Munn, respectively) are the first big Asian X-Men featured in a film, something that the actors themselves don't take lightly. "Jubilee gets to represent the Asian outsiders who have really haven't had the easiest time fitting into society," Condor said in a February interview with Paper .

Jubilee seemed to be on track to be a substantial character in Apocalypse, as did Storm and Psylocke, since all three women featured somewhat prominently in the film's promotional material. While most of the marketing for Apocalypse focused heavily on the mostly white cast (Jennifer Lawrence's Mystique, James McAvoy's Charles, Sophie Turner's Jean Grey, etc.), the strategic inclusion of Storm, Psylocke and Jubilee in early trailers and promotional photos suggested that their roles would be, if not as big, then at least fairly prominent.

Sadly, that's not the case. (Spoilers ahead!). Storm, a black heroine played by X-Men newcomer Alexandra Shipp, does have a relatively meaty supporting role, as Apocalypse's first horseman. She says a few lines and matters to the story, as we see her meet Apocalypse and grow her powers. Yet disappointingly, that's the closest a POC mutant gets to having an actual arc throughout the film. Olivia Munn's Psylocke is far less substantial, though she is heavily featured in the final battle sequence. She speaks only a handful of words throughout the film, and her main mutant power seems to be ditching all of her clothing once she joins Apocalypse. Her presence is felt in the film, but mostly just as kickass eye candy.

Then there's Jubilee, a Chinese-American mutant from the comics whose introduction to the X-Men films was largely publicized. When Apocalypse director Bryan Singer announced that he had cast Lana Condor as Jubilee for X-Men: Apocalypse , many fans assumed she would play a substantial supporting role in the film. Her casting was announced around the same time as that of Turner as Jean Grey, putting Jubilee and Jean Grey somewhat on an even playing field. And yet, in the finished product, Jubilee is little more than a glorified extra. Her name is barely mentioned, lines barely heard and powers unseen. That's right, Jubilee never once uses her powers in Apocalypse. Instead, she's relegated to being Jean's silent, Asian friend. (Talk about your Asian sidekick.) It's a pretty big gut punch to fans who were looking forward to seeing Jubilee on the big screen, not to mention those who were looking forward to seeing an Asian American superhero.

And even the characters who get a decent amount of screen time — Storm and Psylocke — fail to leave much of an impression. With little dialogue and even less character development, those two's only impact is that they let the movie boast a "diverse" cast. (Apocalypse, played by Guatemalan American actor Oscar Isaac, does play more heavily in the film, but his ethnic makeup doesn't become a factor, as the mutant is blue for most of the film.) This is nothing against the actors, who do their best with what little they are given. And, hey, beggars can't be choosers — we all know how few roles there are for actors of color in Hollywood. But the fact that the filmmakers behind Apocalypse seemed to believed casting a few non-white actors in minimal roles counted as a real effort to make the film more diverse is insulting.

Apocalypse's under-use of its non-white characters is also a huge deficit to the X-Men franchise, which is currently competing with the Marvel Cinematic Universe. In Captain America: Civil War, the MCU successfully continued to give The Falcon, Marvel's first African-American superhero, a substantial supporting role, and introduced the Black Panther, Marvel's first African superhero, extremely effectively. Civil War featured almost as many superheroes as mutants in Apocalypse, and yet each and every one had more dialogue and agency than the minority characters in Apocalypse. When put in this context, the attempts at creating a more diverse world of superheroes in Apocalypse is frustrating and unacceptable.

The extreme lack of diversity in X-Men: Apocalypse is especially disappointing considering that the theme of the X-Men franchise has always been the struggle for equality and acceptance. Mutants want to be accepted by humans, who are fearful of people who are different from them. It's a conflict that has drawn innumerable comparisons to the LGBTQ movement — X-2's famous "coming out" scene comes to mind — and the history of racism in the U.S. (Days of Future Past was about preventing a global genocide). For a movie franchise that preaches inclusion, it could stand to include some more non-white actors.

Bottom line: when your movie has more blue characters (Mystique, Beast, Nightcrawler, and Apocalypse) than people of color, maybe you should rethink your casting approach.