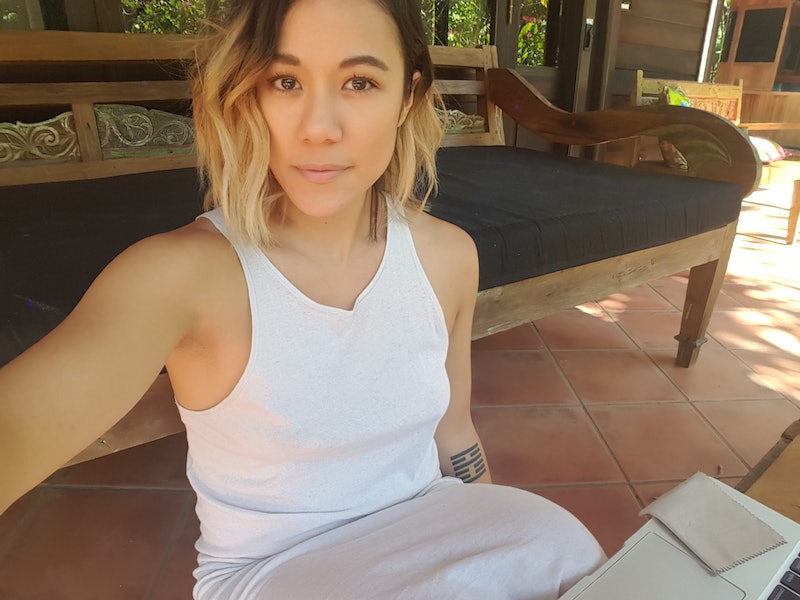 I've been happily living the braless life for over a year now. My acute aversion to brassieres, however, has existed ever since I was an awkward tween. I was always told that the uncomfortably-wired undergarment was good for me, and I believed that squeezing into one was a necessary rite of passage to womanhood. "What do you mean? Of course you have to wear a bra!" my mom used to say when I whined in protest. So I followed orders and hooked on a beige, slightly-padded one every morning, thinking I was taking the obligatory express train straight into adulthood.

Years later, I finally realized that this whole must-wear-a-bra thing was utter bullshit. First of all, research shows that wearing a bra 24/7 can actually be bad for you. Yep, bad for you. (You can't fight science, Mom!) More importantly, as I got older, I learned that there are a whole lot of things society tells us we have to do that we actually don't — regardless of what the advertisements and magazine covers tell us, there's no right way for boobs to look. It's all about how you and your nipples feel —and how healthy you are. So in honor of breasts all over the world this National No Bra Day, I'm encouraging anyone out there who has boobs to leave their brassiere in the drawer today, and meet the world with free breasts.

Here are seven reasons not to wear a bra.

1. We've Been Brainwashed Into Thinking We Need One To Look Socially Acceptable

Ever since we were little girls, we were told that women are meant to wear bras and that bras are meant to be worn by women. Fashion magazines tell us which bras we need to have, how many we should own at any given time, and even how to properly arrange our brassiere drawer. In a way, we've been taught that any foundation to a good outfit starts with the underwear and the bra.

The problem is not with wearing a bra in and of itself, but rather the fact that we were never even given the option of whether or not we wanted to wear it in the first place. You don't have to wear a bra to look socially acceptable, and there's nothing inherently vulgar about your breasts just because they are sexualized by society.

Even though bras are meant to be comfortable items of clothing that support us as we're moving throughout the day, the majority of bra-related commercials sexualize the very existence of a bra. We see women flailing around on their luscious bed in a lacy push-up bra, gazing lustfully into the camera while they mysteriously bite their bottom lip. The reality of putting on a bra is very different, though. In fact, the reality of putting on a bra in the morning can be one of the most unsexy things you do all day. You fumble around to hook the clasp in a way that's not going to cut off your circulation, all the while reading a day-old email and trying to remember if you already put on deodorant.

All the more reason to toss the bra out the window and discover your own version of sexy, regardless of what the oversexualized ads say. For me (and for a lot of other friends I know who have adopted the braless way of life), letting my breasts roam without boundaries has made me more body positive. I'm no longer trying to force my boobs to be a shape they're not. You might also find that you feel sexier than ever before when you let your body take the form it's naturally meant to be in.

You know that "Ahh!" feeling at the end of the day when you take off your bra and unleash your boobs from a day of shackles? Well, you could have that feeling every second of the day. Not having a tight bra wrapped around your rib cage can make it easier for you to move around, have a midday stretch, and even breathe easier. Of course, not everyone will feel more comfortable without a bra; those of us with very large breasts may actually need that support in order to move freely themselves. But it's possible you would be more comfortable without one, so at least give it a shot before you make a decision about your own breasts.

4. It Keeps The Girls Perkier

Believe it or not, researchers have found that strapping yourself into a bra could have negative effects on the health of your tits. At the Centre Hospitalier Universitaire (University Hospital) in Besançon, France, a team of researchers surveyed 330 women between the ages of 18 and 35 over 15 years, finding that the individuals who didn't wear a bra experienced less sagging than those who wore one religiously.

Jean-Denis Rouillon, sport science researcher and professor at the University of Franche-Comte in Besançon, led the study and concluded that the breast tissue can be damaged from long-term bra use. "Medically, physiologically, anatomically – breasts gain no benefit from being denied gravity. On the contrary, they get saggier with a bra," he said in an interview with France Info. The ladies who went braless saw 0.3 inches more of a lift in their nipples compared to the bra-wearing folks. It's suggested that young women who abstain from bras will see "increased collagen production and elasticity" over time, which basically means your boobs will stay perkier and firmer as you get older. So while there's nothing inherently wrong with sagging or aging breasts, if you prefer them perky, it seems like you have a lot to gain from tossing out your bra.

5. There Are So Many Other Better Alternatives

When I gave up bras, I initially thought I would never find anything to replace them. However, I quickly found myself floating around in the magical world of bralettes. There are so many different styles and fits out there, each one more adorable than the next. So on the off chance I feel like wearing any sort of undergarment for my breasts, I now have an array of options that are cuter and more comfortable than any push-up bra that's ever been in my dresser. You can experiment with everything from bralettes to bandeaus, all in the name of comfy boobs and cute fashion.

6. A Lot Of Clothes Simply Look Better Without One

There were so many dresses I wore this past summer that would have been a disaster if I had tried to pair them with a bra. I'm talking about those loose-fitting, open-back numbers that feel almost as comfortable as wearing pajamas. It's a nightmare to find the perfect bra that matches correctly, and if you don't find one that's just right, the whole outfit is potentially ruined. You're better off chucking the brassiere and trying on your top without it.

7. Because You've Probably Never Even Tried It Before!

A lot of us have become so used to playing the bra game that we may have never even thought about taking a break from it. If that sounds familiar, think about just testing it out. Going without a bra is pretty liberating for many people who carry around boobs on the regular, and that could be the case for you. Then again, it might not be, and you'll find that going braless is a huge pain in the ass (or in the breasts, rather). But you'll never know the truth until you figure it out for yourself. Happy boob exploring!