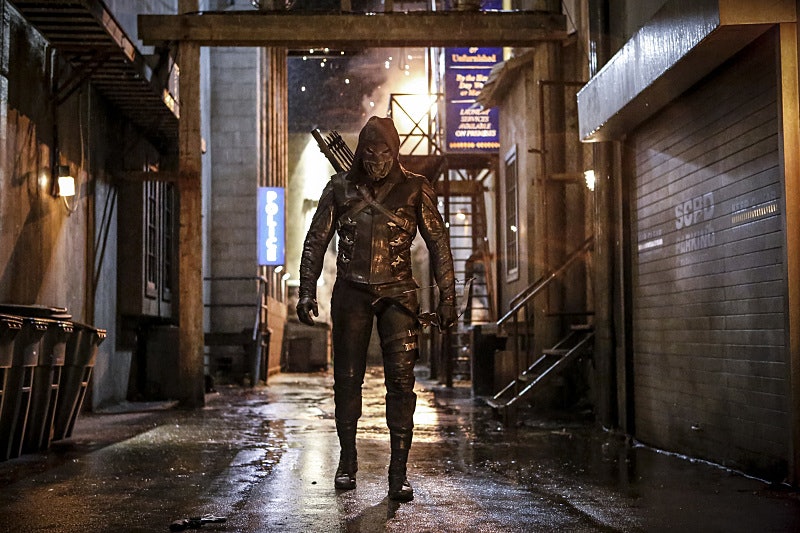 Wednesday night's Arrow episode "The Recruits" gave fans a lot to think about. Not only did Oliver try to embrace his new teammates, but we were given another peak at the masked man, Prometheus, during the episode's final few minutes, who seems very concerned with keeping the Green Arrow safe... at least for now. I say that because he definitely didn't like when Tobias Church almost killed him earlier that day. In fact, it made him so mad that he threatened to put an end to Church altogether if he ever tried that again. But why? What does Prometheus want with Oliver on Arrow ? I seriously doubt he's keeping him safe out of the goodness of his heart.

The most logical answer to this is that Prometheus wants the Green Arrow all to himself and doesn't want anyone else to beat him to the punch. We know that Prometheus is somehow connected to Oliver's sordid past, so maybe he wants to make his former acquaintance suffer for whatever went down between them. Then again, maybe he has something else in mind entirely. Could it be that he's secretly looking out for Oliver while just trying to be bad? (Probably not.)

Either way, Oliver officially has a target on his back, which is really nothing all that new. Suffice to say, it's a good thing Mr. Queen has finally come around on adding new members to Team Arrow. Something tells me he's going to need all the help he can get very, very soon.