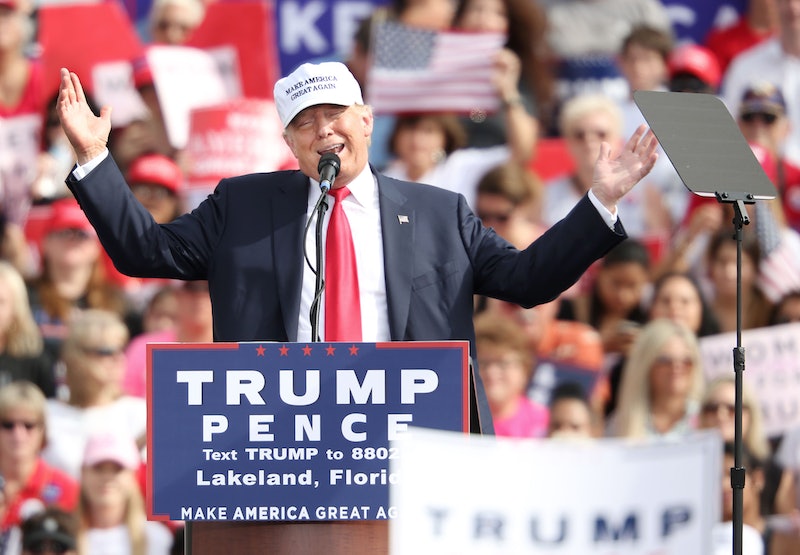 Sunday night at the second presidential debate, Donald Trump suggested that if he were elected president, he would put his opponent, Hillary Clinton in jail — or at least appoint a special prosecutor to do so. Clinton replied, saying that "it's just awfully good that someone with the temperament of Donald Trump is not in charge of the law in our country." To which Trump replied, "Because you'd be in jail." The charge is unprecedented in modern American politics, and now Trump is making the jail argument again — this time at a campaign stop in Florida.

That would make you think he's rather serious and not making quips, as his campaign keeps trying to assure you. It's one thing to make a joke in the heat of a very contentious debate, but it's quite another to repeat the claim at a campaign rally, when you're on stage alone. It came out totally differently too. He wasn't responding to a jab from Clinton; he was finishing his own argument against her private email server. At the rally, he laid out his views on the matter quite succinctly and said, "She deleted the emails. She has to go to jail." But then he went on:

This is the most heinous, the most serious thing that I've ever seen involving justice in the United States — in the history of the United States. We have a person that has committed crimes that is now running for the presidency.

All the while his campaign manager keeps saying this is a joke or a quip. On Monday Kellyanne Conway said on MSNBC's Morning Joe, "That was a quip. And I saw in NBC's own reporting it was referred to as a quip, so I'll go with NBC on it." But that was before round two of this rhetoric. You'd think she'd come up with a different argument, but no. Not so much.

She went on CNN's The Situation Room and told Brianna Keilar that she was hung up on this "one thing" and that she was taking it "literally," which I guess Keilar and the media are not meant to do. Keilar had tried to point out to Conway why this is such a big deal: "[Trump] is talking about going around the Democratic process, I mean talking about jailing your political opponent is something." But Conway somehow doesn't see it that way. "No, he's not," Conway said. "You're taking it literally. You're just stuck on this one thing." Conway thinks the bluster is just fine:

In other words, what are you saying, you're saying that (Trump) had to stop and say, 'Here's how you get to jail, here's the process.' That's completely ridiculous ... he's talking about what a lot of Americans want to know why the heck this woman wasn't punished at all and why news outlets like this one think that's okay.

But a large group of political scientists don't agree with Conway — and they don't think it's fine. On Tuesday, The New York Times ran an article titled, "Trump's Threat to Jail Clinton Also Targets Democracy's Institutions." For it, the outlet interviewed a number of poli-sci profs who said this is the kind of step autocratic leaders like the late President Hugo Chávez of Venezuela or President Robert Mugabe of Zimbabwe would take. That's probably not the route the United States wants to go. Former Republican U.S. attorney general Michael Mukasey told NPR that it "would make us look like a banana republic."

That's not a good path for a future leader to embark upon. Now Trump may not care about the moral or political arguments, but given the importance of rule of law for business, you'd think he'd want to stop repeating this jail argument.