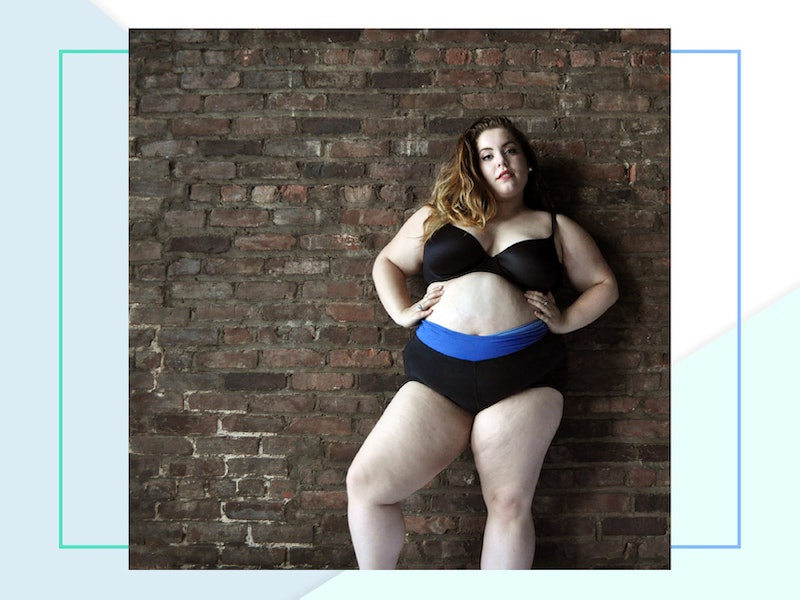 Hannah Caldwell is not prepared to take off her clothes. She is on set to photograph other people for Snapchat, part of her job as an Associate Social Media Editor at Bustle. But there's a gap in the shoot schedule that needs to be filled, and she suddenly finds herself contemplating whether the bra and panties she's worn are suitable for the public eye.

When she was first asked if she'd be interested in participating in the shoot — a mere 10 minutes or so before call time — there was little hesitation to Caldwell's response. "I'm happy to [shoot] if you want," she told me over GChat. "[But] I am not wearing attractive underwear lol."

The social media star and beauty maven is rocking some spandex shorts and a simple black bra. Somehow, the effortlessness of her undergarments feels like a metaphor for the way she approaches many things, impromptu lingerie shoots and body image alike.

"Most of the [time], I don’t think about how my body looks, I just live in it," she tells me later. "But I did walk by a window this morning on my way to work and thought, 'My arms look fat.' The beautiful thing about those kinds of moments is that I can have the thought, tell my mind to shut up, keep walking, and not think or care about it anymore."

Caldwell is not inherently against the word fat, by any means. It's a term she's readily embraced when it comes to other people's positive utilization of it, as well as when it comes to most of her body, most of the time. Her biggest hang-ups, however, are her arms. "They usually seem to look bigger than I think they will and there’s always been an accompanying sense of disappointment or shame or even disgust."

These are feelings often tied to the F-word. Not because there's actually anything disappointing, shameful, or disgusting about fatness or visibly fat people, but because we are so often told to believe there is. Sometimes, however, re-programming ourselves and reevaluating what fat actually is, and what it looks like, starts with our tolerance and understanding of other humans.

"I find it so easy to support other people, friends, celebrities, or strangers in celebrating bodies as they are and finding every body beautiful," she tells me. "But when it comes to my own, it’s so much harder."

Here, Caldwell echoes a sentiment a lot of self-identified body positive people might sometimes experience. The notion that all bodies are worthy of tolerance and possessing of their own beauty is arguably an obvious one, but applying it to yourself isn't always quite as simple.

In the moments when her own body image is wavering, Caldwell finds it important to go about her day as she would any other. "I’ve never let myself not wear a tank top for fear of my arms looking fat, even if it means I’ll feel down on myself at some point during the day," she explains. "I’m trying to do that more and more. Just letting myself live in the body I have and slowly learning to love it."

Another useful tool on her own journey to better self-image has been language. Caldwell believes it's crucial to think critically about the terminology we all use both in reference to our own bodies and those of others. She offers the example of some of her Instagram friends, many of whom comment about how "so-and-so is such a skinny mini" or scroll through Facebook snaps and tell their plus size buddies, "You look so thin in this picture, so who cares if you're making a weird face?"

"None of these comments are meant to be harmful, but they are," Caldwell adds. "[They] make us feel like skinny is the goal, that fat is the enemy." Although she thinks mainstream media is responsible for a fair share of the body negativity and fat antagonism so rampant in culture at large, the implementation of more mindful language in the day-to-day can have a positive influence on both yourself and those around you. When we refuse to use the word "fat" as a synonym for unhealthy, unattractive, lazy, or unflattering, for example, we can help frame it as the morally neutral descriptor that it actually is.

Of course, doing so won't necessarily stop other people from being fat shaming, nor will it prevent instances of body shame with strangers. Caldwell finds the subway of New York City a particularly body negative space. The same week of the shoot, she chose to sit in between two man spreaders during one of her morning rides. "I was trying to make a positive impact on society," she later jokes. "[But] one of the people next to me looked offended by the width of my hips and moved away from me."

"I guess my only advice in a situation like this when you feel stigmatized is try your best to realize that it’s their problem, not yours," she tells me. "If people can’t deal with the way you look or your mere existence, then there’s not much you can do besides wish them the best and continue to sit pretty on your now very roomy subway seat."

It isn't always easy to brush off instances of fat shaming that make you feel like your body is somehow flawed. But Caldwell's words are precisely right: The problem is not you, nor is it your body. The problem is the intolerance making you feel that way.

There is no justifiable reason for a person to be mistreated because the way they appear, though. To many, this is a simple lesson: One taught sometime approximately around the first grade and positively cultivated ever since. To others, it's a lesson they'll probably never learn. To keep the thought alive in your own life, however, it's crucial to stop apologizing for your body, to carry on living, and to push outside of your comfort zone when opportunities present themselves, and you feel comfortable doing so.

On Caldwell's shoot day, for example, she wasn't prepared. "I had just eaten a burrito and had been sweating profusely 90 percent of the day," she says. "I wasn’t planning on taking my clothes off in front of co-workers [...] But I was forced to get out of my head and not worry that I was wearing the shorts with the blue band instead of all black or that I hadn't washed my hair in days or that I had almost certainly sweat most of my makeup off." She just did it — baring her arms and all — and she felt pretty proud of herself after.

More like this
I Tried Kendall Jenner's No-Pants Look As A Plus-Size Woman
By Sarah Chiwaya
Instagram & Facebook May Finally Lift Their Notorious Nudity Ban
By Allie Fasanella
24 History-Making Black Women You Probably Didn't Learn About In School
By Ayana Lage and JR Thorpe
25 Inspiring Quotes From Black Women To Celebrate Black History Month
By Kyli Rodriguez-Cayro and JR Thorpe
Get Even More From Bustle — Sign Up For The Newsletter
From hair trends to relationship advice, our daily newsletter has everything you need to sound like a person who’s on TikTok, even if you aren’t.