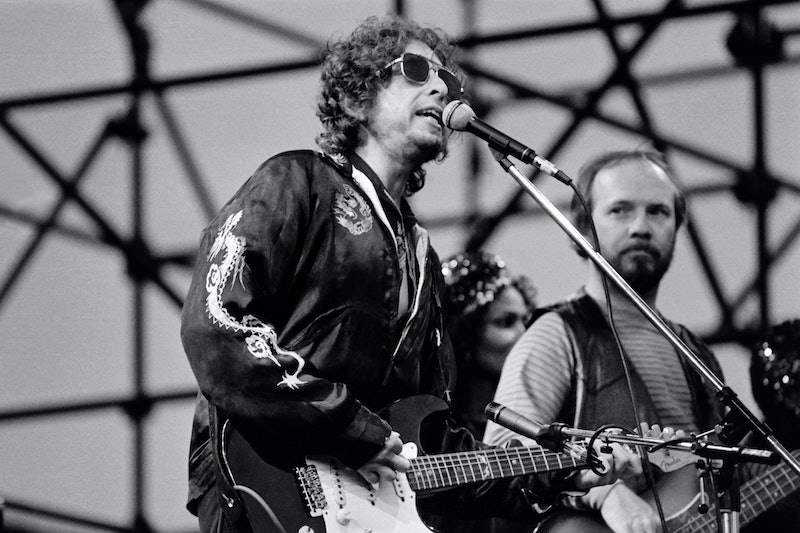 When news broke that Bob Dylan was winner of the 2016 Nobel Prize in literature this morning, people seemed to react in one of two very different ways: pure elation that the music icon won the much-deserved honor, or angry confusion that a singer was given a prize his body of work didn't qualify him to receive, or even deserve. My own feeling about whether or not Bob Dylan deserves the Nobel Prize can be simply summed up in the words of Professor Sara Danius, the Swedish Academy member who announced the prize winner: "Of course he does, he just got it."

A huge fan of his music since my parents played his records for me at bedtime, I'll admit that I have a biased opinion when it comes to Bob Dylan's Nobel Prize win. His music evokes in me the same kind of emotion, inspires the same kind of deep thought and introspection, that the greatest Nobel Laureate's novels and poems do. It's moving and inspirational, deeply honest and enlightening, whether it's heard over the airwaves or written on the page.

Not a novelist or a traditional poet, Dylan was awarded the Nobel Prize “for having created new poetic expressions within the great American song tradition,” according to the Prize press release. Inspired by blues and American folk music early on in his life, Dylan's own songwriting emulates some of the same styles and traditions of his favorite genres, including storytelling, but breaks and bends the boundaries of songwriting itself. His influence over the decades is undeniable, and his work throughout the years has changed the fabric of music's history.

Though his medium isn't what we typically think of as particularly "literary" like so many of the works of previous Nobel Prize winners, it's impossible to deny its contribution to the canon. As the Swedish Academy explained, Dylan "is the object of a steady stream of secondary literature." His artistic contributions to the world, though not bound in cloth and leather, have taken on an identity that almost transcends definition, existing somewhere between songwriting and storytelling and poetry. Van Morrison called him the greatest living poet and George Harrison was quoted saying Dylan "makes William Shakespeare look like Billy Joel,” but it isn't just the convictions of other music icons that have convinced me of Dylan's writing merits. It's all the time I've spent with his discography that makes me sure.

From his love songs to his protest cries, Dylan's vast library of songs may not be what we typically consider "literary," but when considered in its entirety, it is literature. His body of work, like any good work of literature, is superior and lasting, made up of timeless compositions that reach into the very core of what it is to be a human. And, like the definition of literature itself, Dylan's own writing has been recreated and reinvented over and over again throughout the years, each time presenting itself as being of the time. Always rich, always powerful, and always beautiful, Dylan's song lyrics are all the evidence that's needed to prove his songbooks deserve to be shelved alongside the great Nobel Prize winning authors of years past.

A Pulitzer Prize winner, Rock and Roll Hall of Famer, a Golden Globe, Academy Award, and a 12-time Grammy winner, Presidential Medal of Freedom recipient, Bob Dylan's list of accolades goes on and on, and the newest addition — Nobel Prize Laureate — is just as deserved as all the rest.