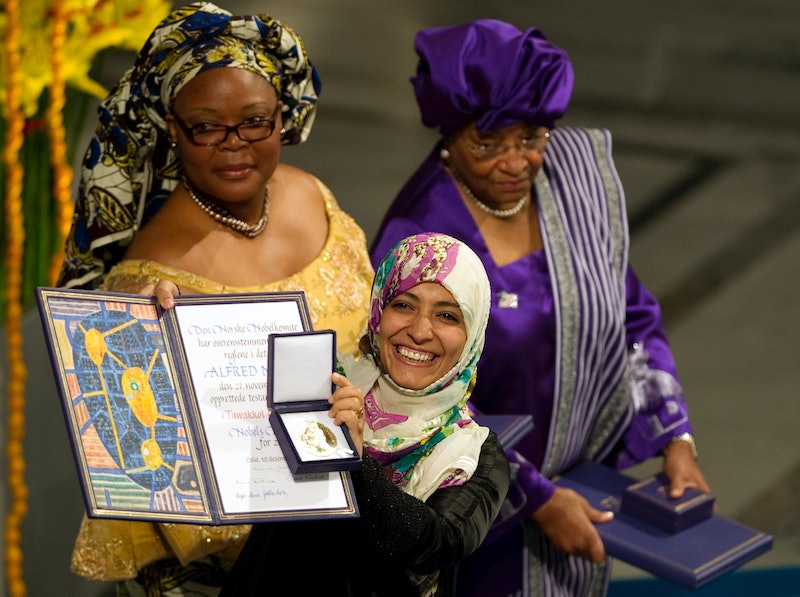 Amid the furor surrounding Thursday's announcement that musician and world-famous mumbler Bob Dylan had won the 2016 Nobel Prize for Literature, the world's foremost literary award, some people noticed a little problem: this was the final Nobel announcement of the year. And not one of the six categories (physics, chemistry, medicine, literature, economics and peace) featured a single female Nobel prize winner. This is a radical step backwards from 2015, where 20 percent of the total winners were female (which, even by itself, is a pretty upsetting statistic). And, unfortunately, it continues a trend throughout the history of the Nobel Prize: over the awards' history, they've only been given to 49 women, versus 825 men. Yes, you read that statistic correctly.

The justifications for this 2016 woman-drought are varied: Perhaps "nobody was good enough" this year. (Considering that the Nobel Prize award work done years before, this isn't exactly a good argument.) Perhaps there will be a corrective influx of female winners next year. Perhaps political considerations shut out various female candidates. (If you don't think a lot of campaigning and outside hand-wringing goes into the nomination of various candidates, you obviously haven't been paying attention. One of the reasons the Syrian poet Adonis, a favorite, likely didn't win this year is the situation in Syria; the Nobel committee, New Republic predicted accurately, "won't touch it with a ten-foot pole.") But it should make us consider other options: that perhaps the Nobel Prize is the crowning aspect of a wider global culture that doesn't give sufficient means or attention to female achievement.

The growth of female representation among the Nobel Prize Laureates has been growing, from a total of 23 Laureates between the years of 1901 to 1960 to a total of 19 just in the last 15 years. That may, to be honest, be commensurate with the increasing participation of women in the workforce, particularly in STEM fields. In the past century, women have received far more opportunities to attain excellence in their fields than ever before in history; but the Nobel Prize selection lays out, starkly, that the journey is still far from over. It's not just a matter of finding the "best possible people" every year; getting a Nobel is an intricate accumulation of factors, many of which may still be prejudiced towards men.

The most interesting part about the Nobel Prize, and a crucial factor for those defending it, is that it's awarded to those likely coming to the end of their professional lives (it can only be given to living candidates), who've become giants in their fields. Many Nobel Prize are given for research done decades previously (this year's medicine Nobel did his winning work in the early '90s, around 25 years ago), or for an artistic oeuvre built up over a lifetime (as with Bob Dylan). This could be used to defend the Nobel: it's arguably lagging behind the big picture, rewarding the older champions of the discipline while younger blood is currently doing the work of the future. But this isn't sufficient, for the reason that Nobel Prizes are used for decision-making about prestige and power now.

As a (very unscientific) child, I idolized Marie Curie, the only woman to have won the Nobel Prize twice. The notion of women as capable of accessing that unique club, arguably the most rarefied in modern human existence, was hugely inspiring.

I'm particularly talking about STEM, here. A 2015 study found that, in labs led by Nobel Prize winners, gender disparities were astonishing: they tended to be just over 75 percent male in the U.S., and even higher in Europe. Elderly Nobel Laureates, it seems, particularly male ones, select young excellent scientists in their own image, entrenching further gender disparities in their particular fields. This matters: working in a prestigious lab is an extremely big deal in science, setting you up for more funding, better resources, bigger projects, and a more substantial career. The idea that Nobel winners are progressively shutting women out of that should give winners, and selection committees, pause — and that's before we even get into the alarming minority of scientific Nobel winners who've gone on the record with sexist ideas about women in science.

For all that the Nobel is designed to award brilliant research done in the past, what it does for the future is equally important. The Nobel Prizes for STEM subjects appear to be caught in a difficult cycle: it awards prestigious men, who employ men, who then have the resources to get the prize in the future. It's a tricky problem, and one that the Nobel alone can't address.

As a (very unscientific) child, I idolized Marie Curie, the only woman to have won the Nobel Prize twice. The notion of women as capable of accessing that unique club, arguably the most rarefied in modern human existence, was hugely inspiring. As every woman in the years since hammered through the doors (Aung San Suu Kyi, Doris Lessing, Toni Morrison, Elizabeth Blackburn), I celebrated, as did many other women around the world who wanted stars to lead us by. Women, Nobel Prize winners dictate, can aim high. In that sense, role models are a crucial part of the Nobel project; and the comparative lack of female ones reveals some very poor things about the world.

The Nobel committee is not solely to blame for the lack of women in this year's awards ... They do, however, need to recognize that, as an institution, they're part of the cycle that produces excellence, not just the reward at the end of the race.

Significantly, I think, 26 of the female Nobel Prize winners have won for either Literature or Peace, over half of the entire female contingent. This still represents a fundamental and hideous gender gap in those fields, but it provides an interesting idea: possibly it's easier for women to get "softer" Nobel Prize than "more difficult " — aka technical — ones. (This is, of course, a ridiculous division: the idea that Malala Yousafzai or Ellen Johnson Sirleaf, for example, have faced fewer challenges or battled higher odds than physicists is nonsense.) Have political activism and literature simply been more open to female excellence, if still in a startlingly unequal way, in the past century than the sciences? Have there been more opportunities for women to become extraordinary (at least in the eyes of the Nobel selection committee) in areas that prioritize emotion, communication, and artistic sensibility, or is it simply easier to convince a Nobel committee of the excellence of female endeavors in those fields? Is it, perhaps, a little of both?

Implicit bias is a deep and abiding part of women's existence in STEM. Study after study has revealed that cultural preconceptions about women as less capable in science, mathematics, engineering and technology pervade all levels of the career ladder; the Nobel, at the very top, is just one. It's worth keeping in mind that Nobel selection committees may very well be no different, and that they're also viewing the culmination of bias over entire careers. Work to equalize Nobel awards can't just start at the top. It must also begin at the bottom.

The Nobel committee is not solely to blame for the lack of women in this year's awards, though they're likely taking a long hard look at themselves at the moment. They do, however, need to recognize that, as an institution, they're part of the cycle that produces excellence, not just the reward at the end of the race. What should they do with this burden? A Nobel Academy to foster young researchers? Extensive mentorship programs? It's up in the air. But in light of 2016's difficulties, other places need to examine the issue too, from Nobel winner-run labs to Ivy League colleges and private research facilities.

Because if the work "isn't good enough" for the Nobel, it's not because women aren't smart enough. It's because the world is still holding us back.

More like this
Wimbledon Alters All-White Kit Rule Amid Candid Period Discussions
By Catharina Cheung and Rachel Mantock
The 7 Best Undershirts for Women
By Elizabeth Enochs
You'd Look So Damn Sexy In Any Of This Lingerie That's Wildly Popular On Amazon
By Laura G.
Claire Foy & Rooney Mara Revisit A Devastating Tale In 'Women Talking'
By Bustle UK
Get Even More From Bustle — Sign Up For The Newsletter