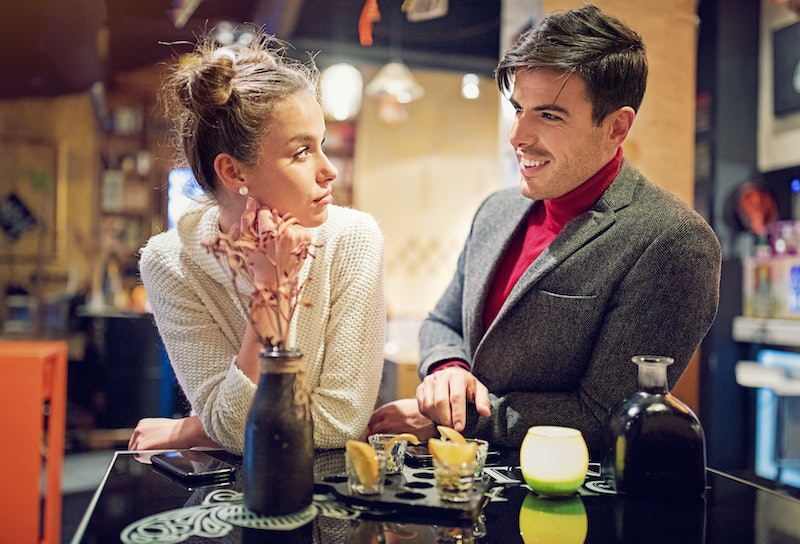 You never know what you're going to get on a first date. You might find yourself sitting across from someone who makes your heart swell so much that you want to jump over the table and kiss their face off. Or, you might find yourself wanting to jump over the table and hit them over the head with a frying pan, Looney Tune-style. That's the thing about first dates — you're confronted with someone, who in this context, is a perfect stranger. You don't know about each other's boundaries. You're unfamiliar with each other's social habits. You don't know what subjects are off limits. You haven't yet learned about what makes the other person tick, or boil. What's just words to one person can be weapons to another.

So when you're on a date with someone, and they say something that offends you, it will catch you off-guard. You might not know how to react, what's more, you might feel uncomfortable reacting at all. When you're sitting in a dim and quiet restaurant, and even the sound of a fumbled fork sounds like a racket, it can feel inappropriate to rock the boat. You might feel like you can't react the way you normally would and that can be really unsettling.

But if someone says something that fundamentally doesn't agree with you, how do you respond politely, while being true to your morals and not making a scene? Recently, I had this experience and was so surprised by how difficult it was to find the words to defend my feelings to a stranger. Here's how to deal with an offensive remark without flipping a table:

Remember, the best way to stand up for yourself is calmly and collectively. So while you might feel the need to lunge out of your seat and start shouting, find your center and take some deep belly breaths. This will help take the edge of the remark off. You want to think before you speak, and you want to do so with poised intent.

Some offenses are not malicious — they're merely a result of poor wording, nerves, or miscommunication. But other offenses are ignorant, which can be seriously dangerous. If someone makes a generalization that offends your race, culture, religion or heritage, gender, or orientation, you will probably feel a strong need to stand up for yourself. And if you're comfortable doing so, go for it. Just make sure that you approach the conversation from an informative place and not a antagonistic place.

See It Their Way

It's not always necessary to put yourself in the offender's shoes. Sometimes people who say offensive things deserve to be judged for them, you don't always need to pardon someone with empathy. Though it doesn't hurt to try. For the sake of sparking an enlightening conversation for the two of you, ask yourself why this person might have the opinions they do. Ask yourself if their perspective has any validity.

Take The Opportunity To Teach

Maybe this person has never been called out on their offensive sentiments. This is your opportunity to respectfully educate them with your point of view. Explain to them where you're coming from. Give them examples. Ask them to put themselves in your shoes. You might make a difference in this person's perspective.

Stand Up For Yourself

If you go through with defending yourself and your date's reaction doesn't lessen the blow, feel free to leave. If you feel strongly about something and have taken the time to explain your feelings, and still feel unsafe or offended, you're allowed to continue to disagree. You don't need to stay for dessert.

Know When To Drop It

Considering the fact that you're in a public place, this conversation can only go so far before it becomes inappropriate. If you're not satisfied with their answer, it's your right to call for the check and head out. You're not required to live out the entirety of a date. There are no rules.

If you found the courage to stand up for yourself and put someone in their place, follow through with it. Don't let up. If they reach out to you and pretend nothing happened and ask for a second date, decline and tell them why. If they continue to defend themselves, agree to disagree and ask that they stop contacting you.

If you're an avid dater, you're probably learning that there are more kinds of people than you could have ever accounted for. But more than anything, in dating other people, you've learned about yourself. You won't forget the people who ruffle your feathers or rub you the wrong way, but don't let them keep you from holding onto any optimism regarding the dating world. For every person who says something mindless, there's another person who's waiting to say something enlightening.