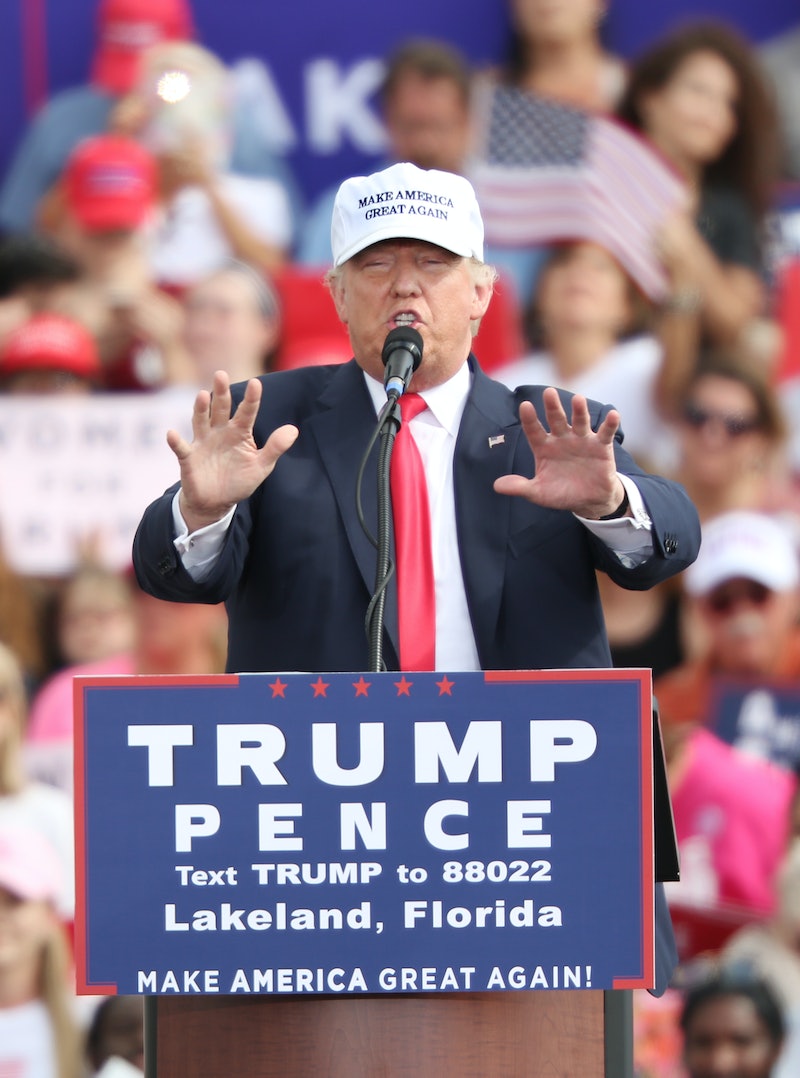 In a week that has seen Donald Trump's campaign all but implode from numerous accounts of the nominee committing sexual assault, two additional women have come forward with allegations of sexual assault. Jessica Leeds and Rachel Crooks have told The New York Times about alleged encounters with Trump, with their accounts of sexual assault spanning back decades to as recently as 2005 (the same year, consequently, Trump discussed how his star power allowed him to "grab women by the pussy"). But the nominee's online defenders have found a new method of silencing Trump's alleged victims with the hashtag #NextFakeTrumpVictim.

This hashtag suggests that these stories of sexual assault were drummed up to distract people from the recent WikiLeaks dump on Hillary Clinton's emails. These supporters believe that Leeds' and Crooks' stories, among the others reporting instances of assault, were implanted by the "liberal media" and by Clinton supporters as an attempt to fan the flames of the #TrumpTapes. (But really, Trump is taking care of self-destructing pretty well on his own.)

Both of the stories recently covered by The New York Times are disturbing, and certainly fit in line with Trump's known pattern of behavior toward women. Leeds claimed she encountered Trump while sitting next to him on an airplane in the '80s. The 74-year-old recounted that Trump lifted the armrest between them, began touching her body, and lifted up her skirt before Leeds ran back to the coach section of the airplane. "He was like an octopus," she told the Times. "His hands were everywhere. It was an assault."

Crooks told the Times that Trump grabbed her and kissed her directly on the mouth outside of an elevator at Trump Tower, after failing to release her from a handshake. She was a 22-year-old receptionist at Trump Tower at the time.

However, the #NextFakeTrumpVictim trivializes this serious issue by arguing that all of these accusations are heinously false.

This is the exact wrong response to these allegations. It clearly shows why victims of assault often do not come forward at all — they are shamed and distrusted, and to do just that with this hashtag only perpetuates a cycle of victim-blaming on a massive scale.

Not only are their experiences invalidated, they become unwarranted warnings for other victims: don't come out with your story unless you want to be publicly shamed, too. It's a reality for sexual assault victims that spans from their own communities to the laws that so often fail to protect them.

And when evidence of Trump's past assaults are so clear — from the 2005 Access Hollywood video to the Entertainment Tonight clip in which he promises he'll be dating a 10-year-old girl in another ten years — these women's stories sound anything but fake.