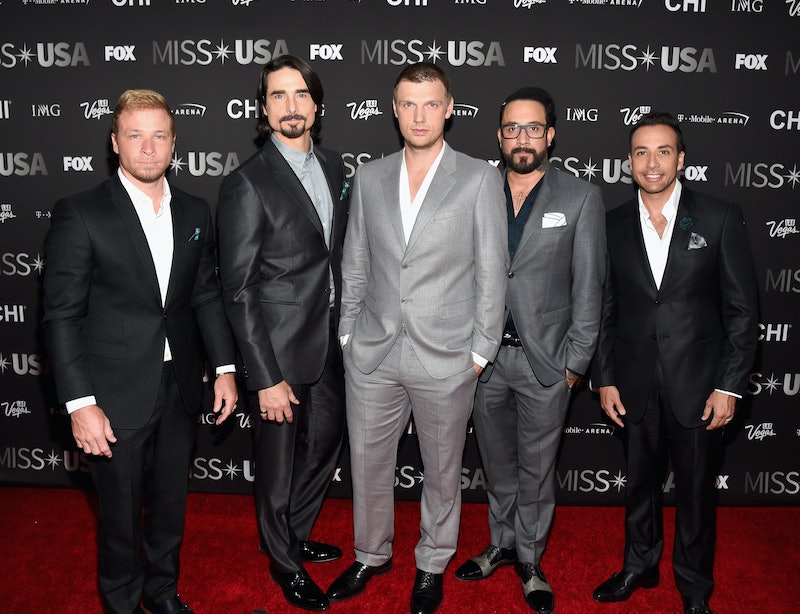 In such uncertain times, it's comforting to know that, sometimes, the world truly can be broken down between good guys and bad guys. And, without flailing miserably into the current endless tally of political debate surrounding him, US presidential candidate Donald Trump seems determined to maintain his seat on the bad guy side of the split. Thankfully, to redress the balance, we do also have good guys — and in this story, our fellas from the Backstreet Boys are our knights in matching, carefully coordinated armor. And why? Well, currently the Backstreet Boys want Trump to stop using their song, "I Want It That Way," as part of his campaign. Which is, apparently, something that the Presidential candidate has been doing at his recent rallies. And honestly, I'm horrified by this — is nothing sacred to this man?

In an email to The Daily Beast, Backstreet Boys publicist Steven Trachtenbroit made a public disassociation between the boy band and Trump, stating, "[The Backstreet Boys] did not approve this and we are not associated with the Trump camp." And may I be the first to breathe a deep sigh of relief, and add an extra sheen of pride to the well-maintained Backstreet Boys shrine that I keep hidden in my closet.

I'm beyond glad that the Backstreet Boys have swooped in to stop this man in his tracks before he could sabotage such a precious, iconic song for all of us. Because, if they didn't shut that down, then whatever would be next? Would we see him spending the entirety of the next Presidential debate swerving questions by performing the dance routine from "Everybody (Backstreet's Back)"? Or would he start using Mean Girls quotes in order to appear like he totally understands and respects women?

Whatever the bizarre truth is behind the story, here's to you Kevin, Brian, Nick, Howie and A.J. for saving the sacred, American institution of the Backstreet Boys for all to enjoy. May the loss of "I Want It That Way" shrivel Trump's entitlement to power, and may you fine boys sing it out even louder and prouder for being reclaimed. I salute you.

More like this
Drake’s Surprise Performance With The Backstreet Boys Was Fans’ Fire
By Stephanie Topacio Long
Britney Spears’ Honeymoon Plans Include Watching This Movie With Her Husband
By Grace Wehniainen
Rihanna Is America's Youngest Self-Made Woman Billionaire, According To 'Forbes'
By Hugh McIntyre
Adele Says It Would Be “Wonderful” To Have Kids With Boyfriend Rich Paul
By Jake Viswanath
Get Even More From Bustle — Sign Up For The Newsletter