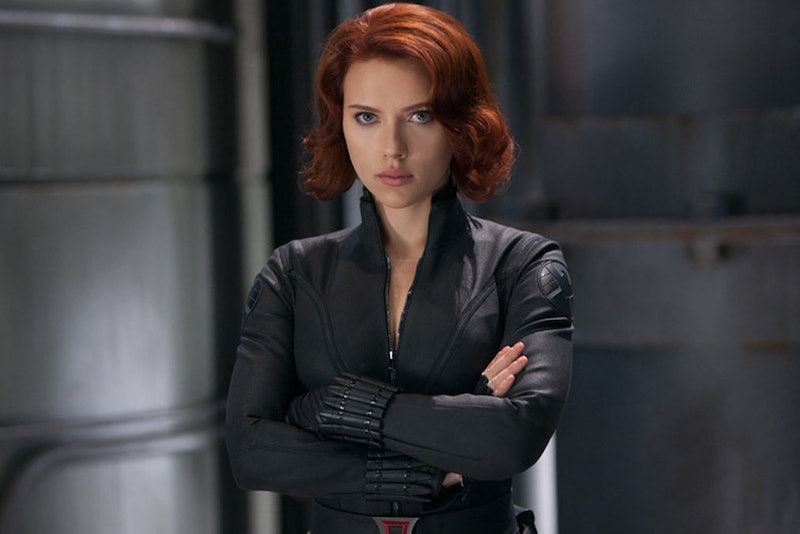 With the increasingly incredulous (yet still somewhat amusing) Marvel titles getting released every month, the world is still perpetually wondering: where is that stand-alone Black Widow film? The bulk majority of the Avengers were fited a handful of of movies each (sans guy-with-the-arrows), and it's been over-stated that an Natasha Romanoff spin-off is way overdue. The cool news is that Scarlett Johansson is down for a Black Widow movie... so long as it's on her own terms.

In a recent interview with Variety, Johannson talked about how she'd be down to return as the S.H.I.E.L.D. spy if they really gave a multi-faceted look of who Black Widow is as a person. "I would like for it to happen under the right circumstances,” Johansson said. "I think there’s a lot of opportunity to mine that story line. She’s got a really rich origins story. There’s a lot of places you can go — you can bring it back to Russia. You could explore the Widow program. There’s all kinds of stuff that you could do with it. You could really uncover the identity of who this person is, where she comes from and where she’s part of."

It's great to hear the actress be so assertive about how the potential movie should be handled, since it's still so aggravating watching the rare female super heroine film get handled (or, rather, passed over).

If you're looking for a long answer as to why, why, why we have so few female-fronted entries in the Marvel Universe (or elsewhere), it all ties back to Hollywood execs not wanting to put their money behind something that might deter half of their demographic, i.e. menfolk. Every half-effort put into female super-movies such as Halle Berry's confusing Catwoman or the more recent box office bomb Jem And The Holograms ends in disaster. Producers don't feel like fronting a big budget for a type of film that's anticipated to not perform well, and so the cycle continues. If you're looking for a short version: money, dear boy. Emphasis on boy.

But the slight on Black Widow is such a specifically aggravating front perhaps because there's such a rich territory to work with, so many ways to humanize and explore this scarlet-haired badass. We know and have seen Marvel work wonders with unconventional properties so I can believe if they put the funds into a character that already has a hefty fanbase (and is played by Scarlett Johansson), it would be a big win for that genre if they put out that Black Widow film.

Somehow, I get the sneaking suspicion that she's not talking about the rom-comy vibe of last year's Saturday Night Live Black Widow parody trailer, with our girl working at Fashion Weekly, thrust in a love triangle between Hulk and Ultron. I don't know. But I am forever certain that a Black Widow is more than ready to stand on her two two, high-heel-boot-wearing feet. And, thank god, so is Johansson.