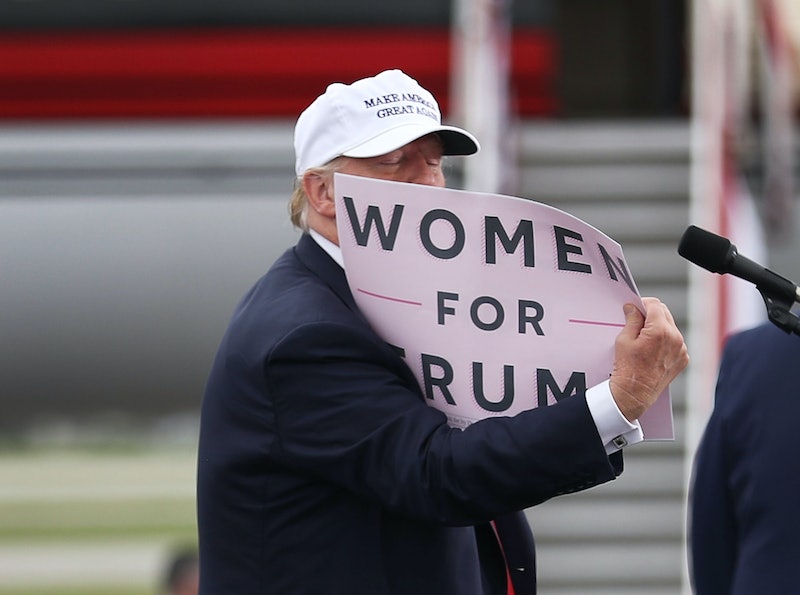 In his Oct. 13 speech in West Palm Beach, Florida, Donald Trump showed why women are afraid to come forward about sexual assault. "You look at her. Look at her words. You tell me what you think. I don't think so," Trump said referring to Natasha Stoynoff, a People reporter who alleged Trump sexually assaulted her in 2005. The New York Times published an account of two women who alleged the same thing, to which Trump both discredited these women's accounts completely and insisted that his supporters refuse to believe the "corrupt" media. This rhetoric is dangerous, and it only reinforces the many reasons why women are so afraid to come forward after a sexual assault.

"These vicious claims about me of inappropriate conduct with women are totally and absolutely false. And the Clintons know it. And they know it very well. These claims are all fabricated. Full of fiction and outright lies," Trump said. Trump has continued to deny these allegations, yet his campaign has yet to release any evidence corroborating his side of the story. Instead, he has relied on attacking the women who have been brave enough to speak out, and has painted the media (particularly the Times) as untrustworthy. According to Trump, the Times reporters who have taken time and diligence to report these women's stories have decided to "tell another totally fabricated and false story that supposedly took place on an airplane more than 30 years ago. Another ridiculous tale. No witnesses. No nothing."

Victims of sexual assault are shamed in many ways, but for a presidential candidate to use his public platform to further shame them and discourage them from coming forward, he is making it increasingly more unsafe for women to come forward.

Every two minutes an American is sexually assaulted; among those assaulted, those between the ages of 12 and 34 are at highest risk for being raped, according to RAINN. Instead of tackling the issues that really matter (such as how to combat these already harrowing statistics), Trump has strengthened the blame against women survivors and discouraged them (made it unsafe for them, really) to come forward.

Moreover, Trump is the king of contradictions and he made many of them throughout his speech. This excerpt from the speech highlights one of the most damaging and unnerving contradictions:

When Trump asked, "Who would have done that if you're doing this and you're one of the top shows on television?" I was instantly reminded of his comment from the 2005 recording on that Access Hollywood bus: "When you're a star ... you can do anything," he said, which he clarified includes his ability to "grab them by the p---y." So, yeah Trump, you would have done that ("that" being physically assault a woman while she was interviewing your for an article for her job) while you were doing one of the top shows on television.

His rhetoric is dangerous, divisive, sexist, and oppressive. His entire speech was basically reinforcing the BS idea that women shouldn't come forward after a sexual assault, and that we should continue to disbelieve their harrowing stories. I don't care how many years it has been, nor how many witnesses were around, nor what he tries to say to deny these women — we should share our stories over and over and over again until a man running for president of the United States understands that we matter and that our voices matter.