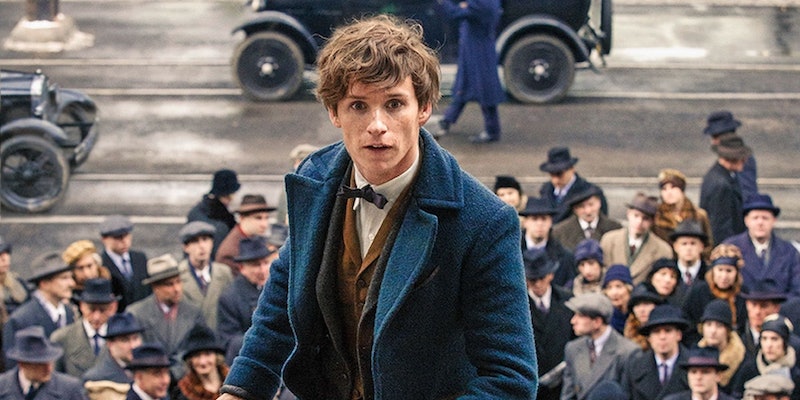 It's a great time to be a Harry Potter fan. On Thursday, it was been confirmed that the second magical empire to come from J.K. Rowling's brilliant brain — Fantastic Beasts & Where To Find Them — will be a five-film franchise. Rowling told a crowd at a Warner Bros. fan event livestreamed from both Los Angeles and London, “I’m pretty sure that there are going to be five movies, now that I’ve been able to properly plot them out." You read that right: Five movies. The London event also gathered together some of the films stars: Among them was Eddie Redmayne, the Oscar-winning actor who will be responsibly for playing the film's lead character, Newt Scamander. Naturally, his presence begs a follow up question: Will the actor play Newt Scamandar in all five films? In other words, will Eddie Redmayne be in all five Fantastic Beasts movies?

Of course, given that this announcement just happened, nothing has been confirmed. We know that, according to Variety, the director for the sequel won't change. David Yates will be directing the second Fantastic Beasts movie, also with a script by Rowling. At this point — unless something drastic or strange happens — we can count on Rowling writing the scripts for all five films. She even responded to the Fantastic Beasts Twitter announcement with, "I'm the screenwriter."

Casting, however, remains a bit more unclear. If Fantastic Beasts follows the same general path that the Harry Potter films did — and if Redmayne's schedule allows for it — he could continue with this franchise for years to come.

However, there's an alternate possibility many aren't considering — that the five films won't all follow Newt Scamander. Backing this up: A newly released Fantastic Beats feature hinted at some binding ties between Fantastic Beasts and Harry Potter. Rowling said, “In Fantastic Beasts and Where To Find Them, you’re learning about a part of history that’s talked about in the Potter books, but that you never see.” She later added, "There are ways in which we connect to the Potter books, that I think people will find surprising. They’re talking about the first time a wizard rose and threatened a world order. This was always where I was interested in going. This is what I wanted to do.”

There's ton of material that Rowling could explore and endless places she could take the story, which means there's a very real possibility that every single film won't revolve around Newt. After all, the film's not called Newt Scamander and The Fantastic Beasts is it? (Though honestly, if it were, I'd still be on board.)