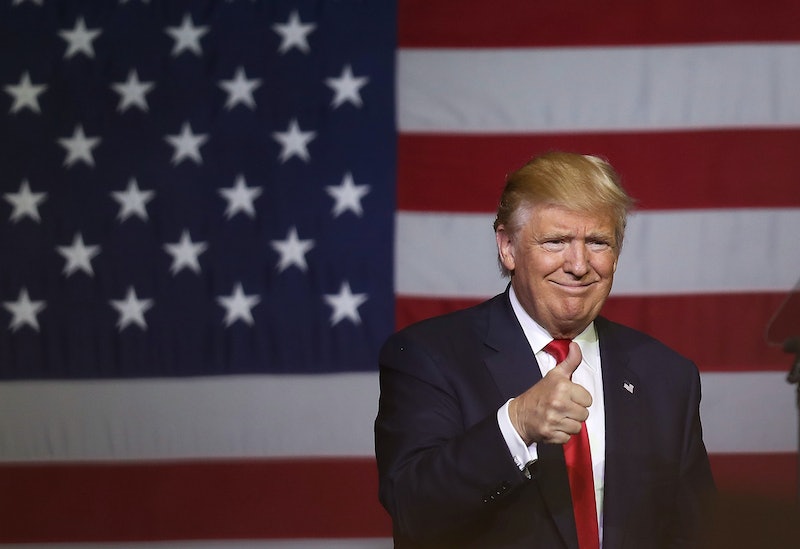 Donald Trump’s terrible, horrible, no good, very bad week continued unabated on Thursday, this time with the resurfacing of an interview Trump did with Howard Stern in 2006. In the clip, Stern’s co-host “jokingly” accuses Trump of having committed sexual assault — and unfortunately, Trump’s reaction to being called a sex predator tells us everything we need to know about the seriousness, or lack thereof, with which Trump views the issue.

“Donald, seriously,” Stern says in the clip. "You know about sexual predators, and things like that. I mean, uh—"

"You are one!" co-host Robin Quivers interjects.

Trump grins and nods as if to say, “you make a fair point.” Seconds later, somebody — it's not totally clear who — says “it’s true” to the idea that Trump is a sex predator, and everyone present, including Trump’s daughter Ivanka, have a big ol’ laugh about it.

It’s appalling. When Trump is accused of being a sex predator, he reacts the way a normal person might react to being called clumsy or forgetful. It’s as if he views sexual assault as a minor character flaw, like being late to appointments, as opposed to an illegal and morally reprehensible violation of personal autonomy.

Sadly, this is merely more confirmation of something we already knew. Throughout his decades in public life, Trump has made it very clear that he doesn’t view uninvited sexual advances as a legitimate problem — that is, it seems as if he doesn’t believe that consent is important. Trump has denied all allegations of non-consensual sexual contact, saying all allegations of such are fabrications.

His opinion became clear when the tape of Trump bragging about groping women was released on Friday, but it was evident before that. When Bill Clinton was accused of sexual harassment in the 1990s, for example, Trump called Clinton’s accusers “terrible” and opined that, actually, Clinton “is really a victim himself.”

Trump reversed his position on that matter a week ago. Operating under the incorrect assumption that it was in his political interests to attack Hillary Clinton for Bill’s affairs, Trump began siding publicly with the same accusers he had disparaged in the 1990s. But days later, when several women came forward accusing Trump of sexual assault, he reverted back to his default position on the matter, referring to his accusers as “horrible, horrible liars.”

Taken in totality, there is but one reasonable conclusion to draw: Trump doesn’t think being referred to as a sexual predator is a big deal. It’s really as simple as that.