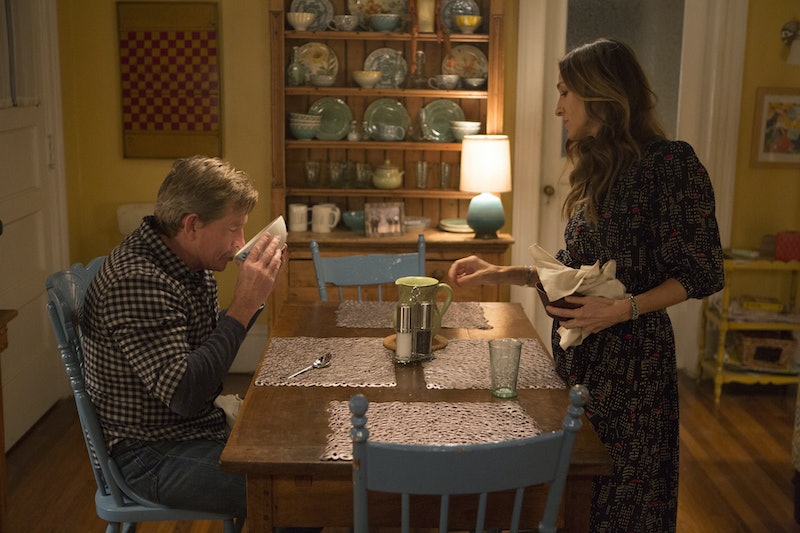 After Robert discovered that Frances was having an affair with Julian (portrayed by the always-excellent Jemaine Clement) during the series premiere of Divorce, the relationship between this estranged husband and wife only got messier. During the Oct. 16 episode, "Next Day," HBO's Divorce showed how ugly a marriage can get when people get hurt. Thomas Haden Church's Robert understandably acts out upon discovering Sarah Jessica Parker's Frances' transgression and the results are brutally funny in the second episode of this new series.

The performances are key in making these unfunny scenarios in this dark comedy laughable, like Parker going to her neighbor's house and switching from being the polite acquaintance to the ranting wife as her neighbors looked on with uncomfortable judgment. Or Church's incredulousness that the dog Frances brought home was actually the same dog from Diane's birthday party. Church's delivery of, "I'm not completely convinced that's the same dog, but let's move on" partnered with Parker trying to maintain her cool defined the hilarious, awkward tone of the show.

And speaking of Molly Shannon's character Diane, how — while Nick was in a medically induced coma after a heart attack that she helped bring on — she cared more about the fact that Frances didn't tell her about her affair with Julian than the state of her own husband. Parker played the straight woman in this hospital scene pitch perfectly as she acknowledged the absurdity of this moment — echoing exactly what the viewers at home watching were thinking.

Frances, Robert, and their friends are all severely flawed and it only increases the tension since they are all so poorly behaved. Whether Frances or Robert stay together is yet to be seen, but as their actions during the second episode of Divorce showed, they deserve each other regardless — and Parker and Church are making the most of this Divorce.

More like this
Who Is 'Umbrella Academy' Star Elliot Page Dating After His Divorce?
By Jake Viswanath
Everything You Need To Remember Before Westworld Season 4
By Brad Witter
Why Simone Ashley Had To Study Snails For Intimacy Training, Pre-‘Bridgerton’
By Grace Wehniainen
The Umbrella Academy Cast Breaks Down That Wild Season 3 Finale
By Gretchen Smail
Get Even More From Bustle — Sign Up For The Newsletter