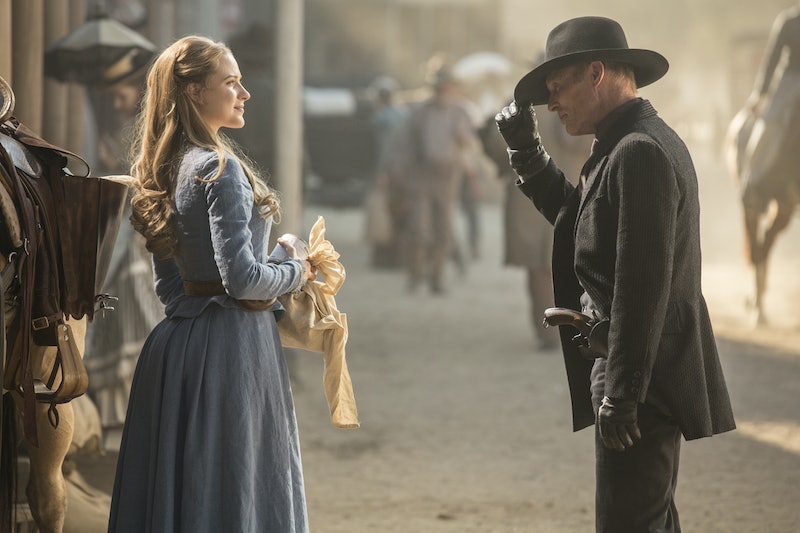 After just one episode of the new HBO series Westworld, sci-fi fans (including this one) are already enamored with the show — and we're hard at work theorizing and trying to make sense of its many intricate mysteries. Let me tell you, we've got our work cut out for us because even the seemingly obvious plot points can't be taken at face value. For example, one character has clearly been painted as a villain — but some viewers have been left wondering if the Man in Black is good or evil on Westworld?

I'm strongly leaning towards evil and a quick recap of his actions in the Oct. 2 series premiere should make it pretty clear why that's my theory. The nameless frequent guest of the theme park committed numerous murders and, in a particularly painful scene to watch, he dragged a screaming, terrified Dolores away from Teddy with the strong implication that he was prepared to sexually assault her. There are already a number of theories about this mysterious character, including that he himself may be a robot, or he's on a mission for revenge. But, in order to figure out if there's even a remote possibility that he has any goodness in his heart, it seems like William (Jimmi Simpson), who we met in episode 2, may hold the key.

How does William connect to the Man in Black, if at all? An interesting fan theory has gained remarkable traction over the past week — the two men are one and the same, and the show has presented us with two separate timelines that take place 30 years apart. Of course, this entire theory hinges on the idea that the onscreen events are not in chronological order and showrunners have conveniently forgotten to clue in viewers. It's definitely not far-fetched, though — after all, the majority of these characters don't age so it would be pretty easy to design a timeline that's meant to throw us off. If the number 30 rings a bell, it's because that's how long the Man in Black stated he's been coming to Westworld.

When William was introduced in the Oct. 9 episode "Chestnut," it quickly became clear that he was hesitant to engage in the physically and sexually violent "games" that are offered at Westworld. And, there are some convincing clues that indicate William is a younger version of the Man in Black — for example, he chooses the white hat over the black one, which could be a sign that he starts out as innocent and then goes over to the dark side. There's also some tell-tale dialogue between he and Logan. When William expresses his reluctance to participate in the games at Westworld, Logan tells him:

You have no idea. This place seduces everybody, eventually. But by the end you're going to be begging me to stay because this place is the answer to that question you've been asking yourself... Who you really are.

In a later scene, the Man in Black states that he's not leaving this time — a possible indication that, when he was a good person he did walk away, but he later returned because Westworld indeed showed him that he really is a villain.

A lot can happen in 30 years and, if William did grow up to be the Man in Black, it's possible that something traumatic happened to him in Westworld and turned him into the violent individual he is today. Or, he willfully shed his innocence and kindness because he gave in to the temptations offered by the amusement park. If the popular fan theory is true, it's likely that we'll gain insight into how and why William evolved into such an evil character. But, regardless of whether or not the reason happens to be personal trauma, I find it impossible to believe the Man in Black is anything other than a villain through and through.