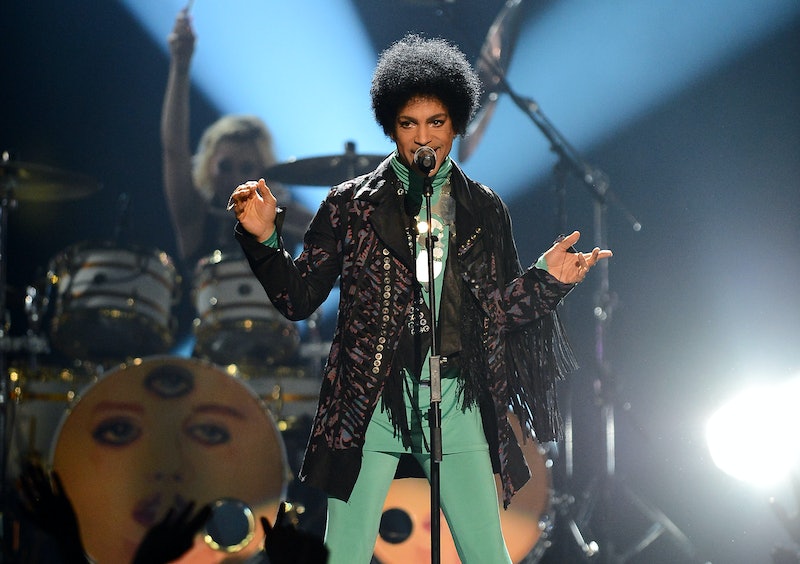 When Prince passed earlier this year, it gave me — and I'd assume lots of music fans — a nauseous jolt. It felt strange somehow to wrap my brain around the idea that someone so iconic and energetic could suddenly not be there anymore. It also posed a problem: his music and energy was predominantly about joy and celebration. So what would be a fitting way to mark Prince's passing? Tears and candlelit vigils didn't seem right, somehow. The best moments from the Prince tribute concert held at the sold-out Xcel Energy Center on Thursday night prove that dancing to the greatest pop music around was a much more appropriate way to commemorate the passing of the Purple One.

The concert wasn't without its issues: Vulture reported John Mayer dropping out last minute and Christina Aguilera being replaced by Jessie J. But, as you'll see, moments like Stevie Wonder and Chaka Khan's duet made the concert seem like a once in a lifetime occasion. So don't fret about the fact you didn't snag tickets or that you were based too far away. Dim the lights, turn your phone to silent, and recreate the beauty of the official Prince tribute concert courtesy of the awesome powers of the internet.

1. The Decor Was Over The Top Fabulous

Perfect for the most unabashedly glamorous man in the music industry.

2. The Audience Were Committed

This said, you're not exactly going to roll up in jeans and a tee to commemorate Prince, are you?

3. Your Favorite Celebrities Were Getting Glammed Up For The Occasion

Or Jessie J, who somehow became Prince. That eyeliner is even more Prince than the purple suit.

Proof of how ahead of his time Prince was. Long before Frank Ocean started laying down beats (the song's later refrain "Am I straight or gay?" feels like the press' obsession with Ocean's sexuality) or Miley came out as gender neutral, there was the effortlessly fluid Prince. "I wish there was no black or white/I wish there were no rules." Can you believe this song came out in 1981?

5. Jessie J Performed "I Wanna Be Your Lover"

Proof that you don't have to identify as male to slay while performing a Prince song. Extra snaps for that purple pantsuit.

6. Jessie J And Luke James Performed "Nothing Compares 2 U"

Prince composed the song for one of his side projects, The Family. It was made famous when performed by Sinead O'Connor, but that didn't stop him performing it when on tour. It's the perfect Prince tribute song, because honestly, who does compare?

The sheer breakneck speed of this song makes it a tricky one to cover — out of Prince's entire repertoire, this is probably the last song you'd choose for karaoke. Which makes it all the more impressive that Scherzinger nails it.

Beyond Prince, who could bring the energy and charisma to the hit that these two do?

9. Stevie Wonder And Chaka Khan Perform "I Feel For You"

Perfect, because, while Prince wrote the song, it's most well-known for Khan's cover.

Sure, nobody can fill Prince's shoes. But the only fitting tribute to Prince is one full of talented musicians, great melodies, and insane amounts of purple. So commemorate one of the most talented pop stars America has ever seen and sashay down memory lane this weekend, courtesy of the Prince tribute concert and the many, many posts on Instagram.

More like this
Photos Of The 'Elvis' Cast vs. Their IRL Counterparts Will Have You All Shook Up
By Grace Wehniainen
Cardi B’s New Single “Hot Shit” Features Kanye
By Alyssa Lapid
You Might Want To Rewatch 'Elvis' For This Britney Spears Easter Egg
By Grace Wehniainen
Sadie Sink Would Escape Vecna From 'Stranger Things' With This Taylor Swift Song
By Grace Wehniainen
Get Even More From Bustle — Sign Up For The Newsletter