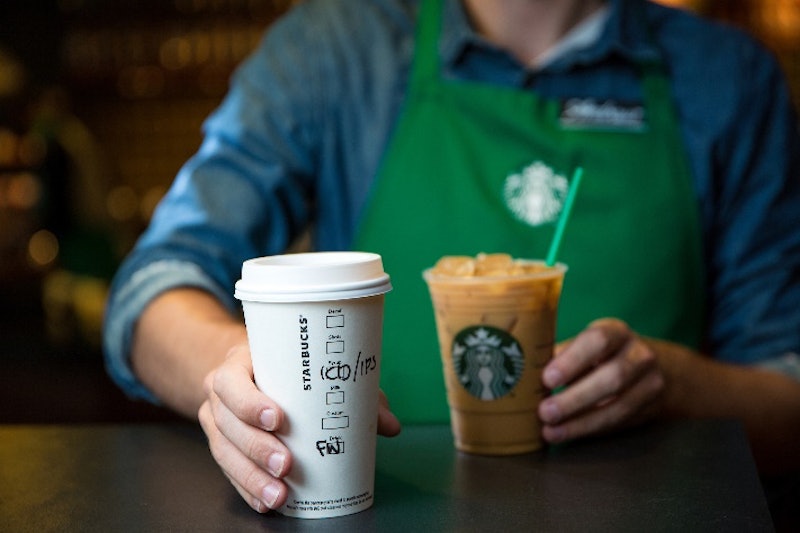 Attention, coffee lovers! If you were looking forward to the weekend, there's another reason to get hyped now: A new series of fall-inspired drinks called Starbucks "Barista Originals" will be available at participating locations nationwide for two consecutive weekends. These Barista Originals were created by Starbucks baristas from all over the country, and they're putting a new spin on some of fall's best flavor combinations — think pumpkin spice, cinnamon, and salted caramel. One word: Yessss!

According to a press release, Starbucks fans will be able to enjoy these tasty drinks from Oct. 13 to 16, and again from Oct. 20 to 23. (Yes, that means you can order these drinks n-o-w.) More than 7,500 Starbucks stores in the United States are participating, so chances are your local Starbucks is one of them.

The available drinks will vary from store to store; however, five in particular were originally selected via an internal contest meant to inspire baristas at each location. For the contest, Starbucks baristas were asked to submit their own innovative ideas for fall beverages via social media, including both hot and cold drinks (and Frappuccinos, and tea-based drinks, and, well... just about anything was fair game). Out of 20 of the most interesting submissions that were taste-tested, these five made the inspirational cut:

Starbucks stores will have the option of either featuring these winners and/or using them as inspiration to customize their own drinks locally. You can also look up the hashtag #BaristaOriginals, which baristas will be using to share their recipes so anyone in the nation can request them. So, basically, that means there's an infinite number of possibilities for new Starbucks drinks. Sweet!

It's awesome to see Starbucks giving baristas the opportunity to be creative and come up with their own concoctions (not to mention, engaging your employees is a big part of a healthy company culture). It's not easy being a barista, after all, with each day bringing tons of different drinks that need making and names that need spelling, all while keeping a smile and greeting at the ready. These two weekends will provide an opportunity for baristas both to gain more recognition and have fun — and might I say that the flavors they came up with sound absolutely scrumptious?

Personally, I'm dying to try those salted caramel drinks (because, like sweet and salty combos, I'm full of contradictions). But the pumpkin spice brews also sound delightful. Ugh. Either I'm going to be that person who takes too long to order, or I'll just have to try them all in one weekend and then use next weekend to get seconds or thirds of my favorites. Perfectly reasonable, I know.

I know where I'm heading to during my lunch break today. Do you?