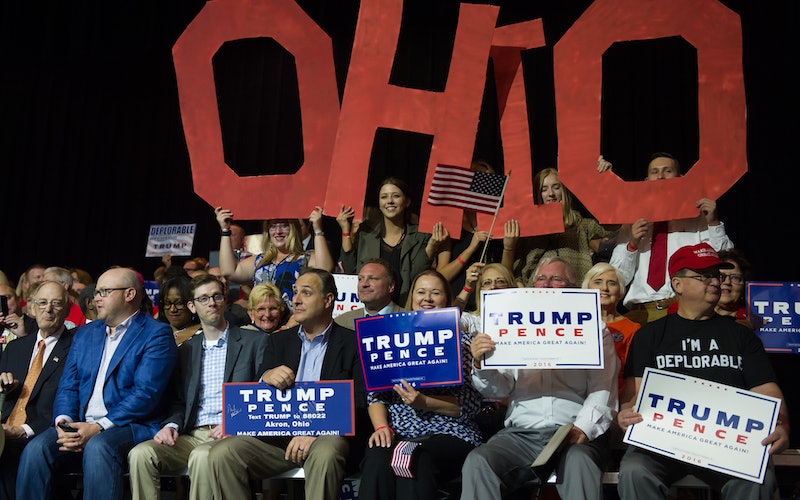 As the margin of defeat grows wider and wider in favor of Hillary Clinton, all eyes on Election Night will be on the "battleground states." It's why Republican candidate Donald Trump is campaigning extra-hard in states like Ohio lately, making a last-ditch effort to salvage his run after a slew of scandals. So what is a battleground state and why are they so important?

A battleground state, commonly referred to as a swing state, is oftentimes responsible for the electoral votes that the election comes down to. You'll remember in 2000 the election is said to have come down to the swing state Florida. And Florida often is, as CNN dubbed it, the "swingiest state." Since a presidential candidate needs to win 270 of the 538 electoral votes available, certain states offer more bang for the proverbial buck and become highly sought after votes as elections wind down to the final days. The competition heats up around these states and candidates spend more time campaigning in those places that are more likely to set a victory in stone.

They're the states that could go either way and aren't typically only red or blue — more likely to sway either way. They're also the ones that hold a lot of electoral votes since each state gets a certain number of electors based on the population of the state. The competitive states can vary from election year to election year.

This year, according to Politico, the publication casting the widest net when it comes to predicting the swing states, names 11 states that hold the most power this election season, calling out: Colorado, Florida, Iowa, Michigan, Nevada, New Hampshire, North Carolina, Ohio, Pennsylvania, Virginia, and Wisconsin. By CBS's estimation, the most contested states fall under a narrower view, naming only four states to be the most valuable citing: North Carolina, Florida, Pennsylvania, and Ohio.

Since the release of Trump's 2005 infamous "p---y" tape, the swing states are looking less swing-y, as it were. By Politico's standards, three polls from important states show Clinton pulling ahead by such margins that if those numbers continue through Election Day, they would make it especially difficult for Trump to ultimately win. Bloomberg spearheaded a poll in Pennsylvania that found Clinton ahead in the battleground state by nine points. A local Michigan poll found Clinton ahead by a whopping 12 percentage points. And in Wisconsin, a poll conducted by Marquette Law School found that the Democratic contender is beating her Republican counterpart by 7 points.