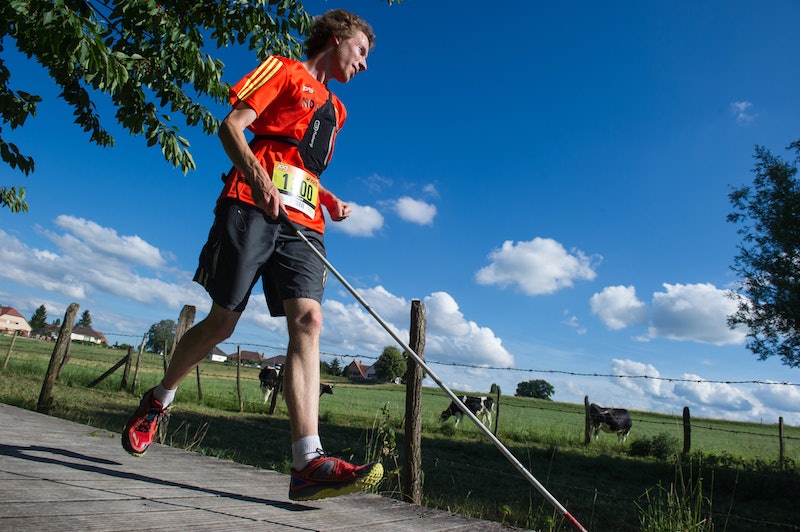 One of the biggest misconceptions about people who are visually impaired (and people with disabilities in general) is that they are totally dependent on others or incapable of taking care of themselves. Fortunately, there's a nationally recognized day especially reserved for breaking down that stereotype: White Cane Day, known more formally as National White Cane Safety Day.

Even though White Cane Day has been a national day of observance for the past 52 years, according to the National Federation of the Blind, not many people have actually heard of it or even know what a white cane is. The idea behind White Cane Day is to honor achievements within the blind community, as well as spread awareness about blindness and all levels of visual impairment or low vision. According to World Health Organization, around 285 million people around the world have visual impairment, a figure which includes 39 million people who are blind. That's a lot of people.

Another part of White Cane Day's mission is to educate people who may think of the white cane as a hindrance for those who are visually impaired, because many blind people consider it actually quite the contrary. Much like the way wheelchairs provide freedom and mobile transportation for people who need them, the white cane allows people who are blind to be more independent in their everyday lives.

Although White Cane Day is technically on Oct. 15, there have been related activities and events taking place all over the nation throughout the entire week. For instance, on Oct. 13, an elementary school in Washington state hosted sports games that kids who are visually impaired could participate in. Other activities people have organized include walks, educational sessions, and even music videos, like this one by Anne Tello:

In 2011, President Barack Obama also designated White Cane Day as Blind Americans Equality Day, a very official reminder that people who are blind not only have been contributing to society since the beginning of time, but also deserve just as much equal opportunity and respect as the next person. It's also one of several ways Obama has supported people with disabilities like myself, and one of the many reasons why I'm going to miss having him as our president.

While there have been many famous blind people, from activist Helen Keller to musician Stevie Wonder, White Cane Day puts an emphasis on the fact that every blind person has as much potential as anyone else. Society has a responsibility of making education, jobs, and other resources accessible to everyone, regardless of who they are. Even though we have a long way to go before stigma surrounding blindness and other disabilities is eliminated, having a day of observance like White Cane Day is a step toward the right direction.

More like this
10 Times Boris Johnson Got It Wrong On Trans Rights
By El Hunt and Sam Ramsden
If Your Refrigerator Is A Mess, These 25 Organizing Products Can Help
By Courtney Young
Here's Your Daily Horoscope For May 23, 2022
By Mecca Woods
An Honest Review Of The TikTok-Famous WalkingPad
By Kaitlyn Wylde
Get Even More From Bustle — Sign Up For The Newsletter