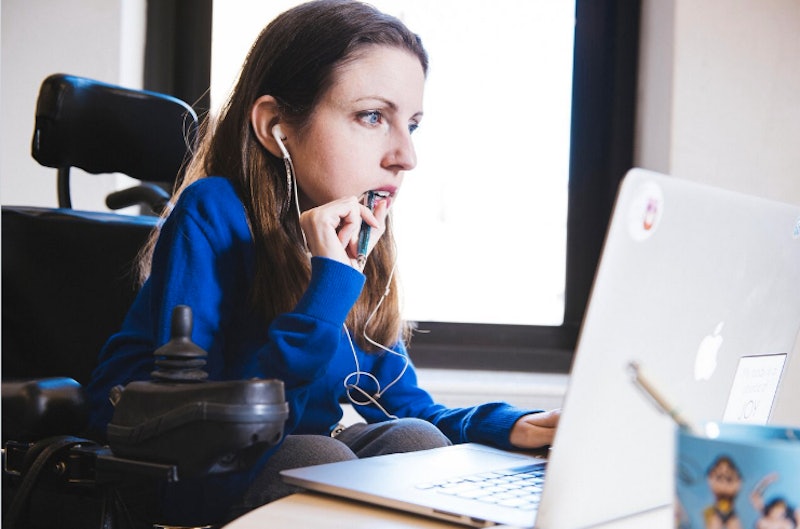 By now, most of us hopefully know that it's not OK to use the word "retarded" as derision or to reject people after a job interview just because they have a disability. This kind of ableism is flat-out insulting and discriminatory (and often illegal). Even so, there are still many things that don't seem ableist, but which nevertheless are. These overlooked actions, attitudes and phrases might seem innocuous or even helpful; in reality, though, they actually do a lot more harm to people with disabilities (PWD) than good.

In case you're confused about why we should even bother, here is what's wrong with ableism: Whether it's conscious or not, ableism projects the idea that people who have disabilities are somehow lesser than able-bodied people — similar, for example, to the way sexism, whether it's benevolent or hostile, projects the view that women are lesser than men. Everyone deserves to be treated with respect, including people with disabilities; their personal preferences for, say, what they'd like to be called should always be honored.

Of course, just because you slip and say something offensive to someone with a disability doesn't automatically make you an ableist. Even people with disabilities (including me) sometimes make these mistakes, too — not because we mean to be offensive, of course, but because our community is not homogeneous and people have different experiences depending on what disability they have. What's important is recognizing where we went wrong and actively both remembering and wanting to do better. It's about making sure our language is inclusive, and that our minds stay open to all different types of bodies.

Here are just a few things that may not actually seem that bad at first, but which definitely fall under ableism:

1. Announcing Someone Else's Disability In An Introduction

Unless there's a very specific reason for why someone introducing two people would refer to one of them as "disabled," it's awkward and out of place to say, "This is my friend John and he has cerebral palsy." Even if it's meant as a heads up, what this does is communicate, "This new person in front of you is disabled and that's the one thing you need to know upfront about them."

If people want to share their disability with a new acquaintance, they'll do it when they want to.

Imagine saying to someone, "Gosh, I'm so sorry you're black." That just sounds wrong, doesn't it? Now, replace the word "black" with "disabled." It's not all that uncommon for PWD to hear expressions of sorrow or regret over the origins of their disability, and yet it's just as disparaging as getting looks of pity.

In fact, a few days ago I met someone whose sister has a tracheostomy (trach) tube just like me. After learning why she needs a trach tube, I said, with genuine sympathy, "Oh no, I'm so sorry that happened." The young woman preceded to say, "Why? She's fine now." I felt so silly. I brush off unnecessary apologies all the time because I'm not sorry for having a trach tube, so why did I assume she would want to hear the same thing?

3. Forgetting That Disability Is Also A Type Of Identity

To be honest, it wasn't until a year or two ago that I realized being disabled is a characteristic of who I am — just like my Asian heritage — and not something to be ashamed of. I mean, I always told myself that; however, it didn't sink in until I realized how big the disability community is, and how proud many are of what makes them unique. When we talk about intersectionality, it's absolutely crucial to include disability alongside gender, race, sexuality, religion, socioeconomic background, and so forth. Disability is not an "accident," or "difficulty," or even a "special need." It is an identity.

This may vary from person to person. Some people are proud of their disability and want others to acknowledge that they have one, while others don't care whether it's overlooked or not. But there's a difference between saying "I think of you just like all of my other friends" and saying, "Well, really, I just pretend it's not there" — "it" being the disability. Indeed, if you're a PWD with an able-bodied significant other and they tell you, "I love you despite your disability," you might want to take that as a potential red flag. Most people I know want a partner who loves all of them, not parts of them.

The awesome thing about being a fiction writer is that you get to create characters and make things happen to them. But just as casting able-bodied actors as disabled characters is problematic because we need better representation of disabled people in Hollywood, writing about characters with disabilities can be dicey if you haven't actually gone through the lived experience of being disabled.

Let's say you're writing about a character with a prosthesis. Interview people who have a prosthesis instead of guessing or imagining what it's like. Need more explanation? Here's an article I wrote about how to write from the perspective of characters from marginalized populations.

6. Assuming That PWD Want To Talk About It All The Time

Um, hi. Yes, we may be disabled, but we have other interests too, like what Netflix shows are coming out and what we should be for Halloween.

I've lost count of how many times people have pointed to my trach tube and called it "that thing" or said "Ugh, that must be uncomfortable." Even my doctors say, "When are you going to take that thing out? You don't want it in forever, do you?" Well, actually, my trach lets me live and breathe every day, so it's been a pretty awesome device. (FYI, I much prefer when people ask me what my trach is or what to call it. It means they're open to learning about my disability, rather than dismissing it.)

8. Telling PWD Whether Or Not They Should Have Kids

You might think you're being a thoughtful, caring person by telling friends with disabilities that it's probably not the best idea to pass on their "disability genes" to their kids, but the truth is, that's really hurtful. It's also not really anyone else's business at all what someone's plans are for the future.

9. Insisting On Helping Out

I understand that it's in our nature to ask whether someone's OK or to want to help out friends who may look like they're struggling, but if a PWD says he or she doesn't need help, listen. We're not helpless, and we're still capable in many ways. After all, people with disabilities know themselves the best.