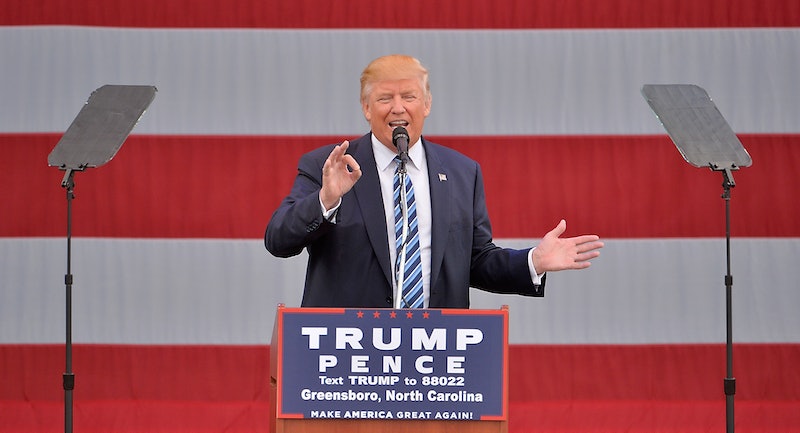 One of the most powerful arguments against Donald Trump is the fundamentally atrocious example he would set for America’s youth. Presidents are inadvertently role models to children, and Trump has said a lot of things that, um, aren’t good for children to hear a president say. In an interview Thursday, Mike Pence was asked to respond to an 11-year-old girl who said Trump’s comments about women “make me feel bad about myself.” He didn’t reply, but the question itself is more illuminating than any excuse Pence could have given.

“There was an 11-year-old girl who told our staff, and she said this completely unsolicited,” the anchor at the Columbus, Ohio, TV station said. “She was talking about Donald Trump’s words in campaign commercials. She said this: ‘When I hear those words and look in the mirror, they make me feel bad about myself.’ Again, she said that totally unsolicited. What would you say to that 11-year-old girl?”

Pence’s response was a classic dodge; he said that “Donald Trump and I are committed to a safer and more prosperous future for their family,” then criticized Hillary Clinton’s foreign policy. But the question itself, and the anecdote contained therein, is much more important than what Pence said and didn’t say.

An 11-year-old girl cannot, of course, grasp all of the nuance and significance of a presidential campaign. At the same time, she's not immune to the psychological effects of institutional sexism and misogyny, and it would be hard to find a more fitting embodiment of institutional sexism than Trump. This is a man who’s made it clear through his own words that he views women primarily as objects for his own pleasure, and you don’t have to be a political historian to feel the impact of those words — nor to fear the prospect of putting such a man in the White House.

This isn’t the only notable recent example of a child having a viscerally negative reaction to Trump. A recent Politico article about how elementary school teachers are dealing with Trump’s ascent recounted an anecdote wherein a disabled fifth grader told his teacher that “you couldn’t vote for Donald Trump, because he made fun of a disabled person on television.” In the same piece, an elementary school teacher in Seattle claimed her students have opined that Trump “hates women.” I have two sisters, ages 8 and 10, and they’ve both expressed very negative views of Trump throughout this election.

Trump is probably going to lose this election. While that won’t entirely undo the impact his words have had on America’s kids, it will hopefully teach many of them that America, when all is said and done, doesn't elect people like Trump to the presidency.