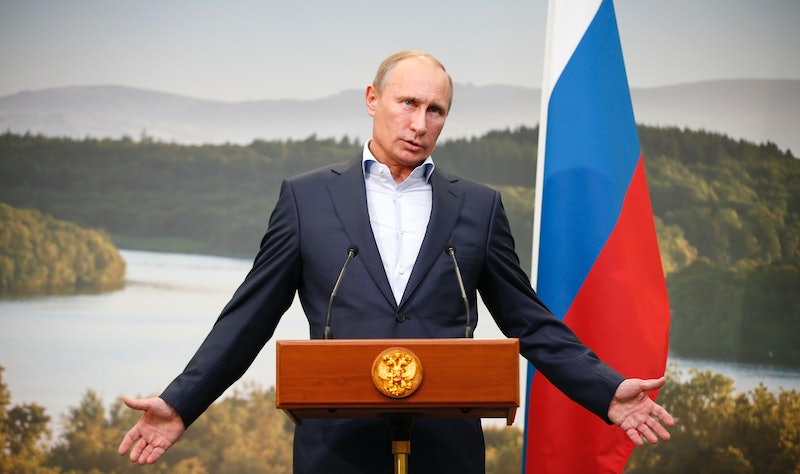 On Monday afternoon, the White House declared that the U.S. and other major international powers had effectively kicked Russia out of the G8 — the Group of Eight, or the eight most industrialized countries in the world — as a penalty for Russia's annexation of the Ukraine region of Crimea. The United States, Britain, Canada, France, Germany, Japan, and Italy agreed to suspend Russia's membership until further notice.

On Monday, the now-G-7 announced that it would be boycotting the group's planned Sochi meeting, which was to hosted by Russia, in June. They'll hold the meeting anyway, but without Putin and co, the group announced. Until 1998, the group didn't include Russia in the first place — it was added to the G7, making the group the G8, in '98. It was then known informally as the G7+1.

Last weekend, Russia took over a third Crimean military base, amid fears that the takeover would stretch to other parts of Ukraine.

After a meeting in the Hague Monday, the now-G7 issued a statement suspending Russia, and threatening further action if Putin continues to annex Crimea as Russia's own.

We remain ready to intensify actions including coordinated sectoral sanctions that will have an increasingly significant impact on the Russian economy, if Russia continues to escalate this situation.

International law prohibits the acquisition of part or all of another state's territory through coercion or force," the statement said. "To do so violates the principles upon which the international system is built. We condemn the illegal referendum held in Crimea in violation of Ukraine's constitution.

Russia, meanwhile, insisted it really didn't care that much. Earlier Monday, at a news conference, Russian Foreign Minister Sergey Lavrov said: "G8 is an informal organization that does not give out any membership cards and, by its definition, cannot remove anyone... All the economic and financial questions are decided in G20, and G8 has the purpose of existence as the forum of dialogue between the leading Western countries and Russia."

The G-20 is a group of top finance ministers representing the world's top-20 economies. Collectively, those 20 economies make up roughly 85 percent of the world's wealth.

More like this
6 Anti-Police Brutality Organizations You Can Support Right Now
By Syeda Khaula Saad and JR Thorpe
Watch Jacinda Arden’s Devastatingly Honest Resignation Speech
By Sam Ramsden
5 Striking Parallels Between Princess Diana & Prince Harry’s TV Interviews
By Catharina Cheung
Here’s Why Danny Masterson’s Hyde Isn’t In 'That '90s Show'
By Brad Witter
Get Even More From Bustle — Sign Up For The Newsletter
From hair trends to relationship advice, our daily newsletter has everything you need to sound like a person who’s on TikTok, even if you aren’t.