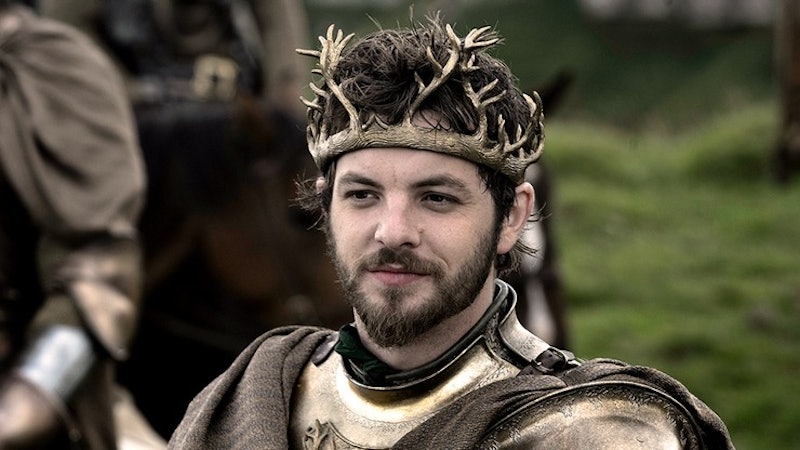 It is good to know being killed by a shadow baby did not dampen actor Gethin Anthony's enthusiasm for Game of Thrones . Anthony played the doomed Renly Baratheon in Seasons 1 and 2 of the show, before Melisandre and Stannis conspired to murder the competition for the Iron Throne. In an interview with Digital Spy, Anthony revealed he is still invested in Game of Thrones and is an avid fan of the show even though Renly is long gone. In fact, he gets so wrapped up in the action there are some twists even the former Renly Baratheon cannot watch.

The hardest one for Anthony to watch is also one of the show's most shocking twists so far. Anthony revealed to Digital Spy he "physically could not watch" Shireen's death scene. The harrowing Season 5 scene saw Stannis and Melisandre sacrificing Stannis' daughter Shireen to R'hllor by burning her at the stake. It was easily one Game of Thrones darkest moments ever. It had to be particularly hard for Anthony to watch considering Shireen was his TV niece.

"I still get very excited, and I still get devastated," Anthony told Digital Spy. "That young actress was so incredible, it was a very moving moment. And it was like... that's my niece! So I get involved."

Anthony's sentiment is one every Game of Thrones fan can agree on. The show's twists can be brutal, but it is impossible not to connect with the amazing characters. It is nice to know even former stars of the show are just as invested in the story as everyone else, despite knowing the behind the scene secrets.

Since his turn on Game of Thrones ended, Anthony has been busy playing Charles Manson in Aquarius alongside David Duchovny. The show was recently canceled after two seasons on NBC, but Anthony has two movies coming up, a sci-fi film called Alt, and the Elizabeth Olsen starring drama Kodachrome. Even though his schedule is packed, Anthony is still making time for Game of Thrones in his life.

Twists like Shireen's graphic death may be hard for Anthony to watch, but he is still psyched to see how the show ends, especially now that the characters are finally coming together. The next time you sit down to watch Game of Thrones, just remember Renly is just as into following the world of Westeros as you are. It's nice to know there's no hard feelings about that whole shadow baby incident.

More like this
Emilia Clarke Shares More Details About The New 'Game Of Thrones' Series
By Maxine Harrison
Vecna Officially Has A Fan In 'Stranger Things' Star Jamie Campbell Bower
By Alyssa Lapid
Yes, Joseph Quinn Is Actually Playing The Guitar In This Epic 'Stranger Things' Scene
By Alyssa Lapid
Natalia Dyer Opened Up About Steve & Nancy’s “Lovely” ‘Stranger Things’ 4 Dynamic
By Grace Wehniainen
Get Even More From Bustle — Sign Up For The Newsletter