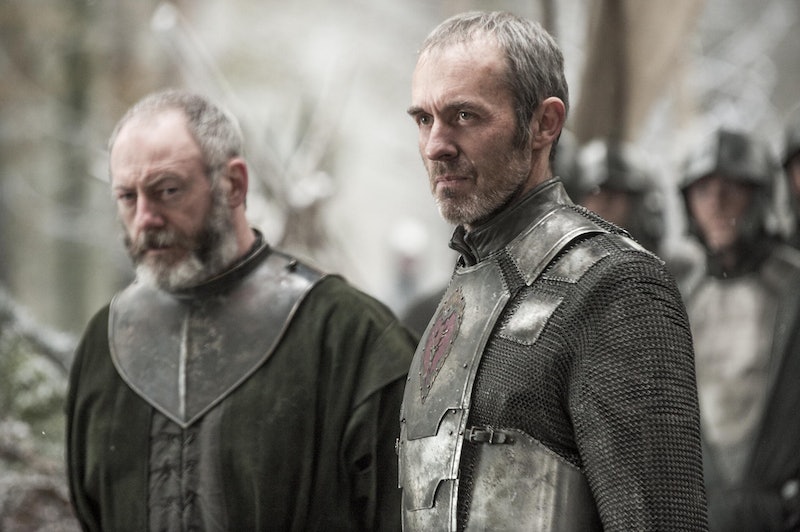 I've never been a fan of Stannis Baratheon. Like Fitz Grant on Scandal, Stannis desires power, but lacks the very skills needed to be a true leader. Since his brother King Robert's death in the first season of Game of Thrones , Stannis has been hell-bent on claiming the crown for himself. Prior to his death, Ned Stark informed Stannis of his suspicions regarding Joffrey's parentage, and backed Stannis as Robert's rightful heir. With this endorsement, Ned Stark inadvertently created a monster.

On his quest for power, Stannis had his younger bother Renly murdered, he kidnapped one of King Robert’s bastards, and he placed his men in harrowing positions because of his terrible strategic skills. Instead of thinking like the solider he once was, Stannis has turned to The Lord of Light and the priestess Melisandre to guide him. As a result, he’s done horrific things that have yielded very little pay-off. His horrific defeat during "The Battle of the Blackwater" didn't even deter him.

Still, I could tolerate Stannis because of the love that he showed for his only daughter Princess Shireen. Despite her scarred face, he always treated Shireen with love and respect. Their time together was the only time we saw Stannis show any emotion. Out of everyone else in his life, Shireen seemed to keep Stannis moving forward. And yet, in last night’s episode “The Dance of Dragons,” Stannis betrays his only daughter. He gives into Melisandre and burns the girl alive. He believes that by killing her, he’s providing the Lord of Light with a sacrifice of King’s blood. His horrifying decision reminded me why I have come to despise Stannis. Hopefully, he'll get what’s coming to him. Until then, here are seven times Stannis proved to us he was an awful person.

1. Every Time He Interacts With His Wife

Stannis is trapped in a loveless marriage with Selyse Baratheon. Because Selyse has birthed several stillborn sons, Stanis resents her and treats her poorly. Though she's obviously a mentally ill woman, he continues to manipulate her with his new found religion. He also delights in parading his affair with Melisandre in front of her. After the events of last night's episode, I doubt that poor Selyse will ever recover.

The best leaders are those who are beloved by their people and are interesting and charismatic. Stannis possesses none of these traits. During the first season of Game of Thrones, Stannis' younger bother Renly and his lover Loras Tyrell ultimately decide that no one will follow Stannis because, "has the personality of a lobster."

3. He's A Follower Not A Leader

Since converting to The Lord of Light, Stannis doesn't seem to be able to make any sound decisions for himself. His poor judgement has allowed priestess Melisandre to weasel her way into his bed and his favor. His lust for power has caused him to mistaken her parlor tricks for true power. Her advice led to his defeat during "The Battle of the Blackwater" and as of last night the death of his only heir.

Despite his low-born status, Stannis Baratheon's most trusted adviser is Ser Davos Seaworth. Because of his loyalty, Stannis promises Devos the position of Hand of the King when he takes the Iron Throne. Devos is essentially the only voice of reason in Stannis' household. He constantly questions the legitimacy of Melisandre and the Lord of Light, and he often urges Stannis to try and make allies. After the defeat at Blackwater, Davos makes a desperate attempt on Melisandre's life. Furious and humiliated, Stannis imprisons his best friend. Though they are on much better footing now, I doubt that Davos will remain on Stannis' side once he discovers that Princess Shireen has been murdered.

5. He Has His Brother Murdered

Admittedly, Renly was foolish to try and claim the Iron Throne as his own. Even though Joffrey was illegitimate, Renly still should have stood behind Stannis. However, instead of giving Renly ample time to consider joining forces with him; Stannis sends Melisandre and her shadow creature to murder his only living brother. If Stannis was a real leader, he would have found a way to work it out with Renly.

6. Stannis Tries To Use Jon Snow

Stannis seems to have some inkling about Jon Snow's parentage and he attempts to manipulate the Lord Commander into getting the Night's Watch the fight for him. Stannis realizes that he must have a Stark on his side in order to gain full cooperation of the North. Stannis knows more than he's letting on and instead of being honest about it, he tries to use his "power" to get Lord Commander Snow to comply.

7. He Allows Melisandre To Burn His Daughter Alive

The sole redeeming quality that Stannis possessed was his love for his daughter Shireen. Despite her disability, Stannis treated his only child with reverence and pride. Initially, when Melisandre suggests that they should sacrifice Shireen to the Lord of Light he is sickened and disgusted. Still, things continue to go poorly for Stannis in his men. After suffering a devastating setback he once again turns to Melisandre. Fearing interference, Stannis sends Davos away and allows Melisandre to burn his only child in front of his men and her mother.